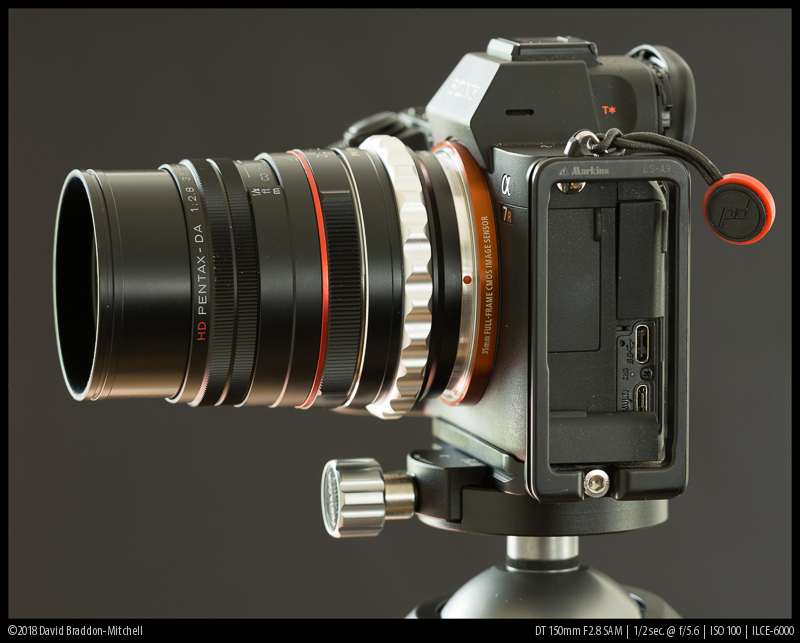 Some time ago Bastian reviewed the Tokina 35mm f2.8 macro. The lens I am talking about today is a significantly upgraded version of the same optical design, in Pentax mount. This is just a quick review, in which I mainly confine myself to how it’s improved over the lens Bastian reviewed.

The lens is, in theory, a standard macro lens for APSC cameras. Bastian reviewed it because , although there is vignetting at infinity (though correctable), it actually covers the full frame with good performance at close distances. At infinity it’s not really usable without a little cropping (you don’t need to go nearly as far as APS though).  At close non-macro distances there’s a bit of easily corrected vignetting (but about 3 stops in the extreme corners). At actual macro distances it performs just fine. 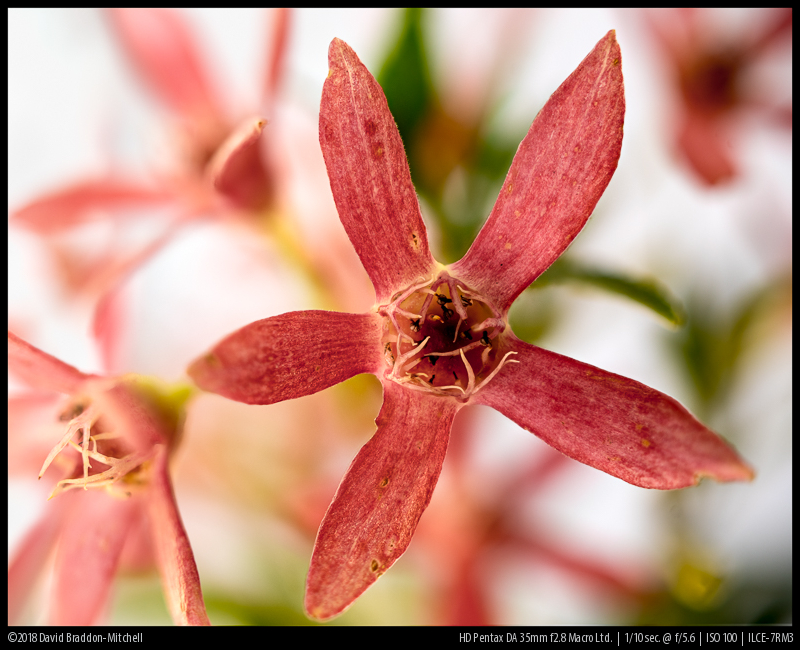 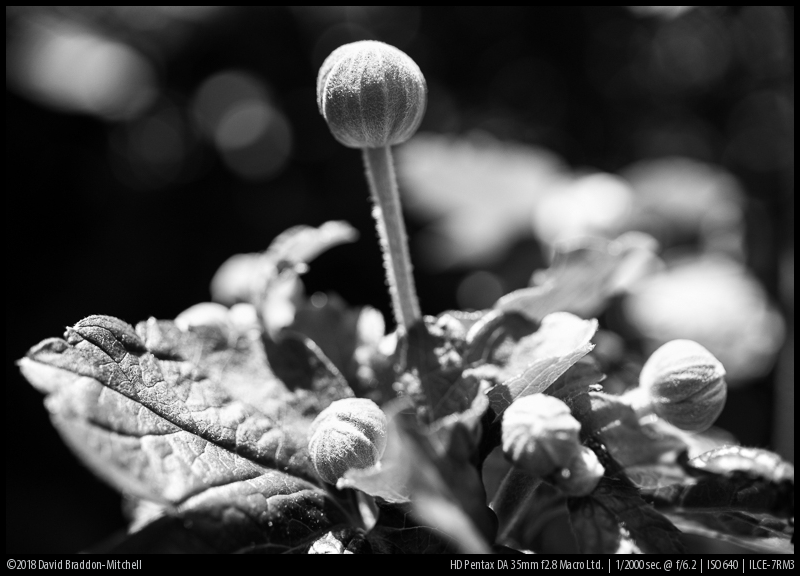 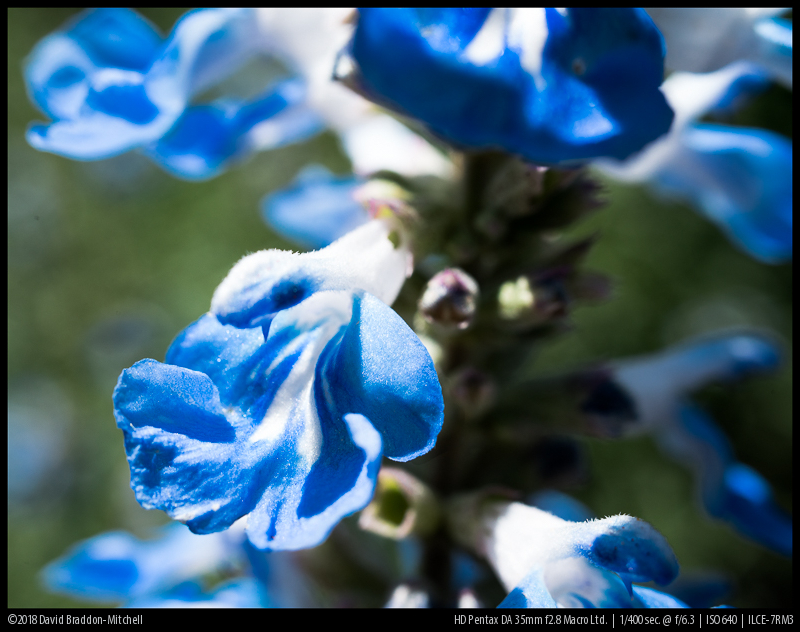 What’s important about this is that there are no 35mm full frame macro lenses on the market. The fact that the working distance on a moderate wide is quite short makes them unpopular for things like insects and so on. But of course the wide angle perspective is sometimes desirable in a macro: you get more of a sense of the other little things around your subject, and more of a ‘dynamic’ image with a less flattened perspective. They are, for example,  very useful tools in a botanical photographer’s kit. 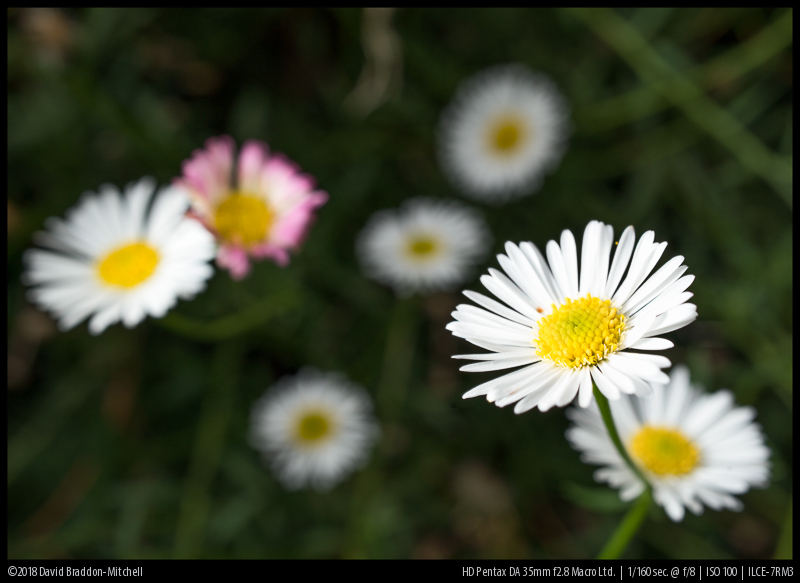 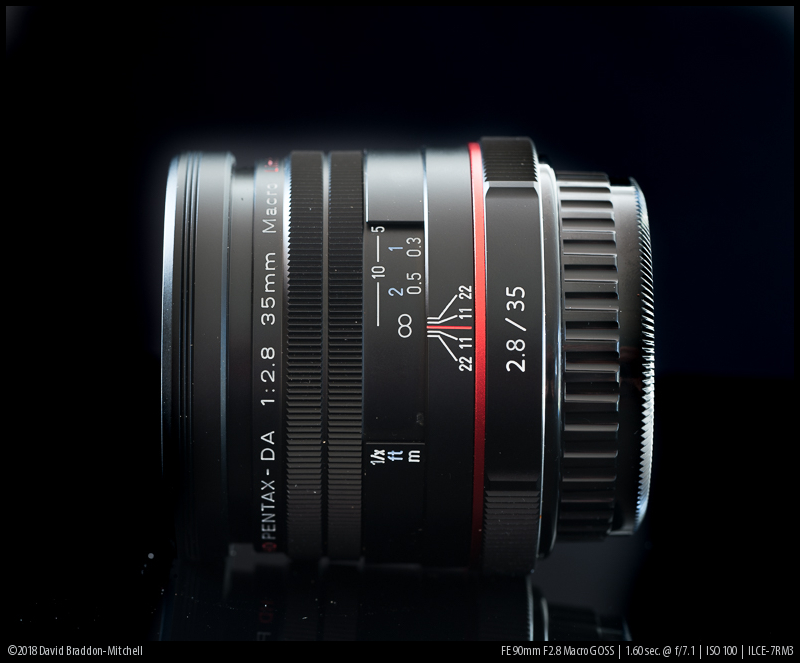 The build quality of the Pentax HD is much higher than the Tokina, if by build quality you mean (as people often seem to) how nice it feels and looks. It’s also considerably smaller and lighter than its Tokina cousin.  It has a metal outer shell, that seems very precisely put together, and all-in-all exudes luxury and quality. It even comes with a beautifully made Leica style push on lens cap! Of course whether that translates into better reliability and ruggedness is something that only destructive testing could reveal. This version comes with a built-in lens hood. A nice feature but be careful: pulled all the way out it will cause huge vignetting, as it’s designed for APSC. But you can pull it about half way out and it’s quite useful.

Bastian’s review of the Tokina version showed it was very sharp and had good colour correction. But there was a fatal flaw: very strong flare if the sun was anywhere near the front lens element. Let me rephrase: disastrous flare. I’m not repeating any of the sharpness or vignetting tests here: see Bastian’s review – the lenses are the same optical design.

But at the time Bastian noted that while the same optical design was used in two Pentax APS lenses, the later of which is the HD Pentax Ltd lens I’m reporting on here, they were alleged to have better coatings. This latest one is supposed to have the best coatings of all. Of course maybe just coatings won’t be enough to fix the flare. You might think the optical design should change too.

But  I can report that the HD Pentax version has above average flare performance: which puts it miles ahead of the Tokina version. I couldn’t replicate the bad Tokina flare  on the Pentax whatever I did, sun in frame or out of the frame. Here are two images of the sun in the frame, one wide open and one at f11. It looked much the same wherever the sun was in the frame. 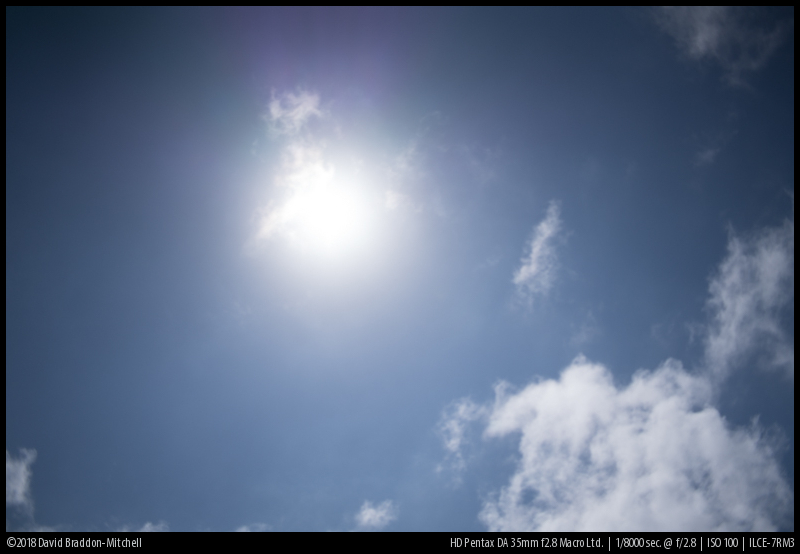 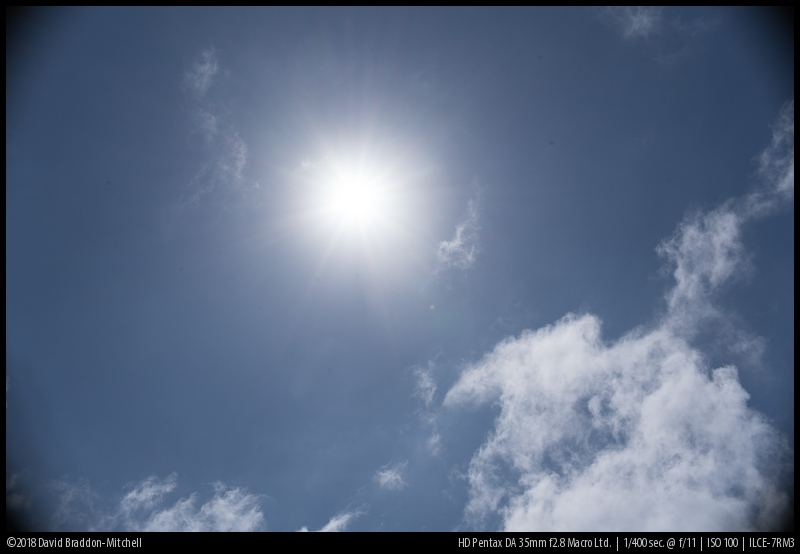 These images were of course taken at infinity, and you can see that at infinity, especially stopped down, the lens doesn’t quite cover the FF sensor. This is not a lens to buy as a general purpose 35mm lens; though if you are carrying it for macro, it will serve well for most purposes, even at infinity if you crop just a little. 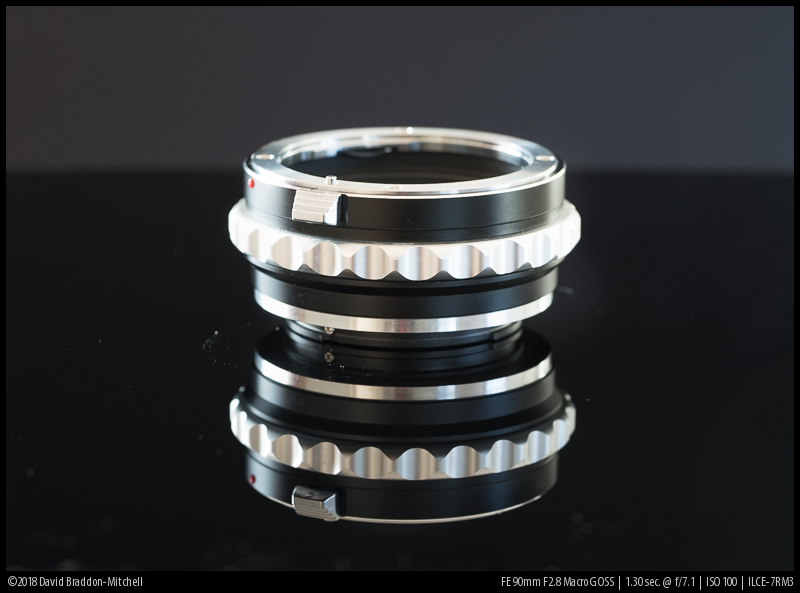 One barrier to using the Pentax version on Sony is that these Pentax DA lenses have no aperture ring and rely on camera control, which is obviously not possible on a Sony body. This means we have to rely on an adapter with aperture control. These are often expensive, bad, or both.

But I’m happy to report on a solution there too: the newer K&F concept Pentax to Sony adapter is even more nicely made than their previous ones, and has an aperture control with click stops no less! I measured the click stops and found that they are more useful with this lens than adapter based click stops usually are. Wide open is of course f2.8; one click is f3.5, two is f5.6, and it’s quite accurate 1 stop clicks after that. You can set intermediate positions too. That’s plenty convenient; and accurate enough that it’s (almost) as good as a proper aperture ring on the lens.

If you need or want a moderate wide angle macro lens on full frame, primarily for macro and close use, you should buy this. It’s very sharp across the field (not extremely  flat field near the outer areas of FF, but for macro that matters not at all unless you are photographing documents). It has good contrast, and the Pentax version has gone from disastrous flare in the Tokina to superb performance. I’m quite amazed there can be so much improvement without changing the optical layout. Together with the right adapter, it’s an indispensable tool in the macro enthusiasts toolbox (though certainly not the first tool she will acquire!). There aren’t really any direct alternatives other than other APSC macros. You can get a 15mm macro from Laowa, which is massively different, or a 50mm standard macro from everybody. You could try a 40 or 35mm enlarger lens reversed. Or else a regular 35mm lens on tubes, but they often don’t perform that well. A strong achromatic diopter might be better.

So if you want a nicely made well performing wide macro that can be used for other purposes (with excellent results at moderate distances, and good central performance at infinity) then this is all there is. Luckily it’s a fine choice.

It’s worth noting that there are different versions  of the K&F adapter still for sale. You want the latest one which is much better. You can get that adapter from eBay here. 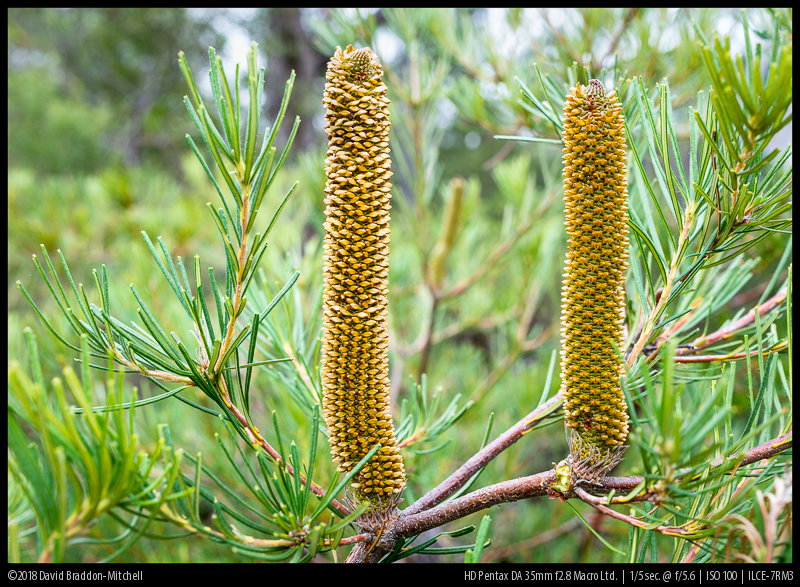 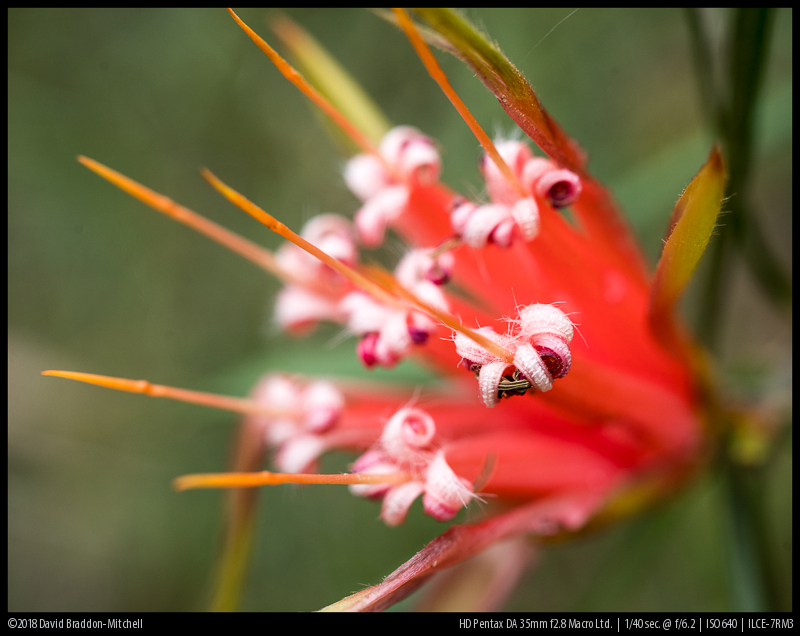 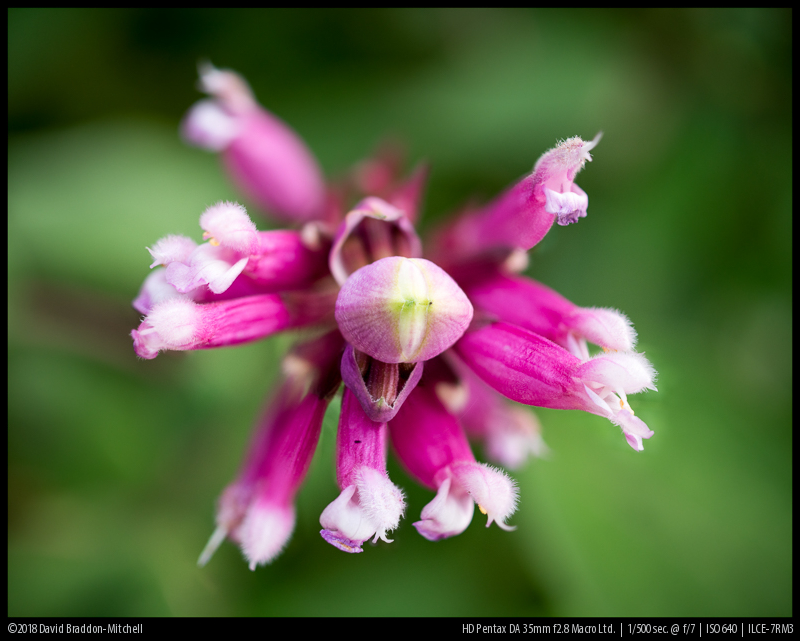