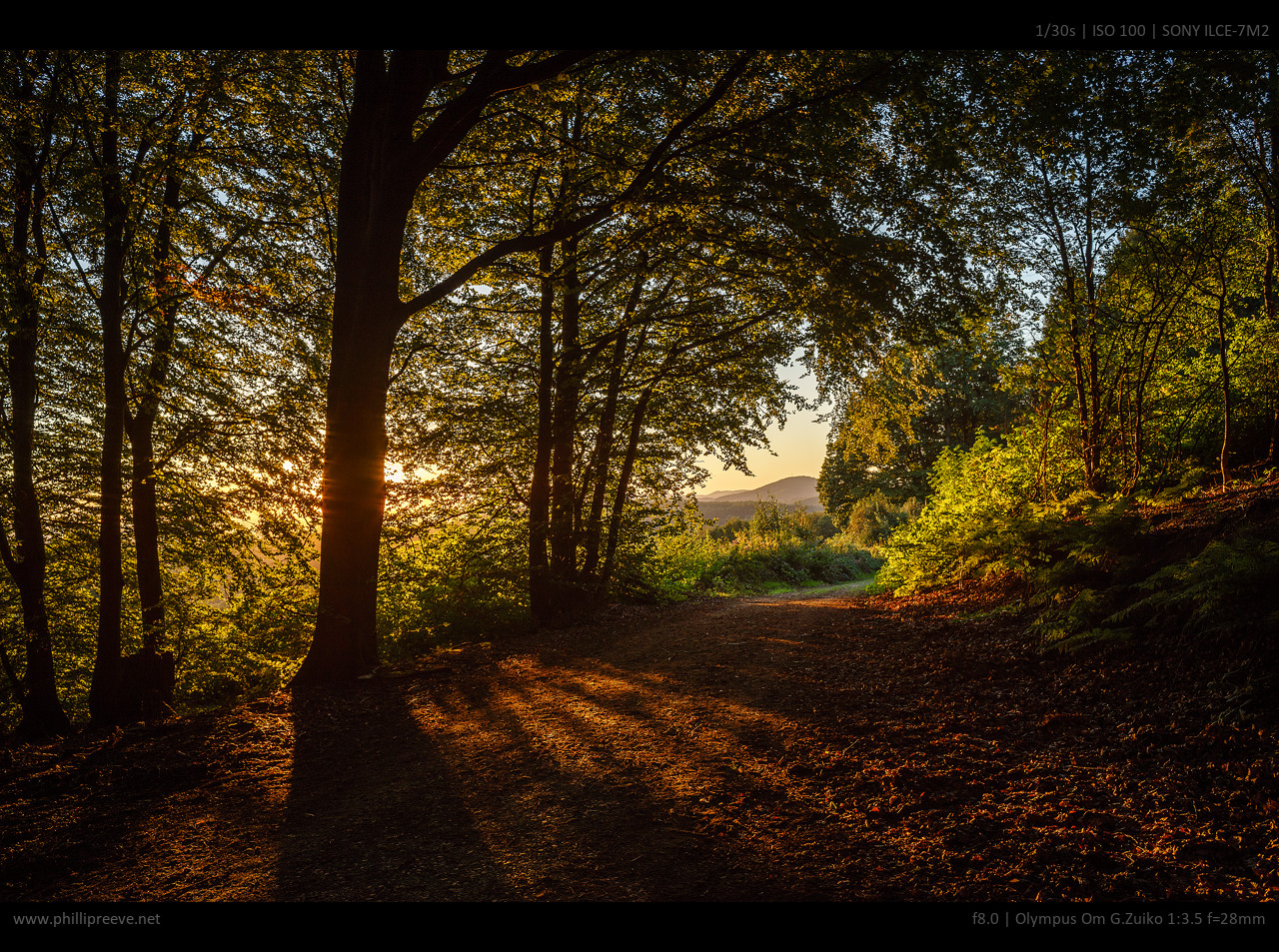 When I took this picture in late August I was working all day on some papers for university, so after many hours behind the desk some sport and photography was well earned.

I packed my small camera bag* with the lightest lenses I could find in my cabinet: a Olympus OM 3.5/28*, Zeiss C/Y 1.7/50* and Olympus OM 2.8/100.* Since I had some strenuous cycling before me I didn’t want to carry any unnecessary weight and I knew that I could capture about anything with this little setup. Of course one is always a bit limited by just three lenses. But I think it is a good exercise to be limited and to be out there is much more important than to have the absolutely best gear anyway.

I take most of my pictures quite close to home but 90 minutes on my bike gave me a bigger radius of about 25 km so I headed for the uplands which I don’t frequent that often. I knew that if the weather had mercy with me I would be able to capture the very last sunlight which I usually can’t, because near to home it is always blocked by trees.

What I liked most about the subject is the chain of hills in the distance. Since I arrived at the scene above about 30 minutes before sunset great light was guaranteed but I needed to find a good composition. My approach to composition is mostly intuitive and I first tried to capture the scene with the Planar 1.7/50 but that photograph lacked some depth so I switched to the 28mm which allowed my to frame the hills with an interesting foreground.

You can’t see it in the small image presented here but I placed the focus on the foreground of the image and allowed the background to be very slightly out of focus. As usual I used the focus magnification feature of my Sony a7II.

Now the Olympus 3.5/28 is as sharp as it is tiny but it has only single coatings which make it very susceptible to flare. My Pentax 3.5/28 or Zeiss 2.8/28 aren’t any sharper but they have much more efficient coatings. Because of the lower weight I preferred to take the Olympus though. Therefore I had to shield the sun with a tree but this worked well enough here.

In general I have come to like Olympus OM lenses quite bit recently. It started with the great Olympus OM 100mm 1:2, but I have since bought a few other lenses which are all tiny and very well made. Their optical performance is quite solid and comparable to Minolta SR and Canon FD lenses. Yo can expect quite a few Olympus reviews in the future. This scene brought the dynamic range of my a7II to it’s limits so it was very important to get the exposure right. For that I relied on two features of my Sony. First I activated the DRO level 5 function which doesn’t affect my raw but it gives me a good idea how far I can push the shadows later. I also activated the Zebra 100+ function which shows overexposed parts of the image. Actually it shows up much too early and the way in which I work around that I turn the exposure wheel down until the zebra doesn’t show up and then lift the exposure 1.66 stops from there which is a pretty sure way to keep the highlights from being overexposed.

Of course the resulting image looked very dark in Lightroom: 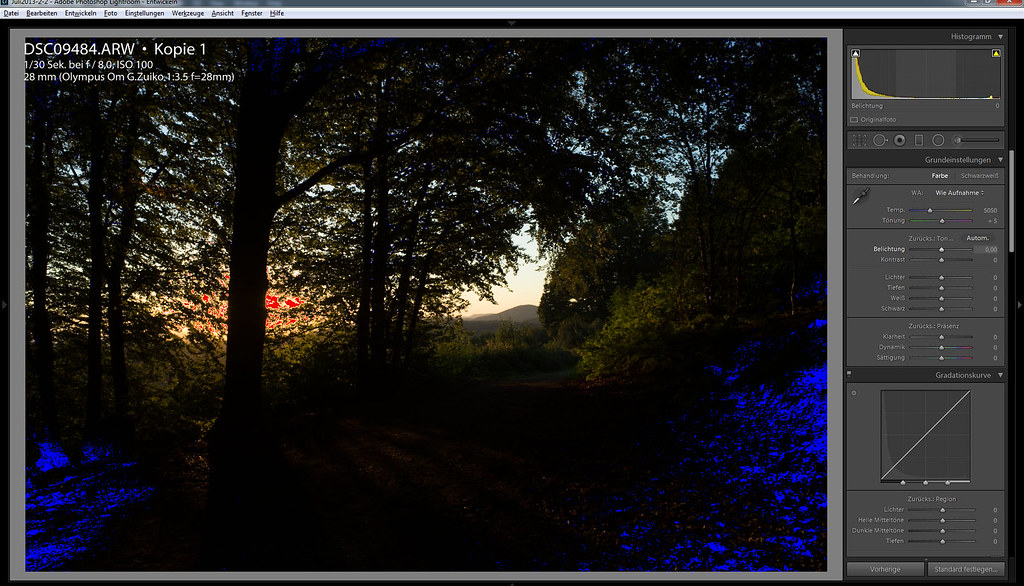 But if you own an a7 series camera you know that this isn’t an issue, you can easily lift the shadows 5 stops. 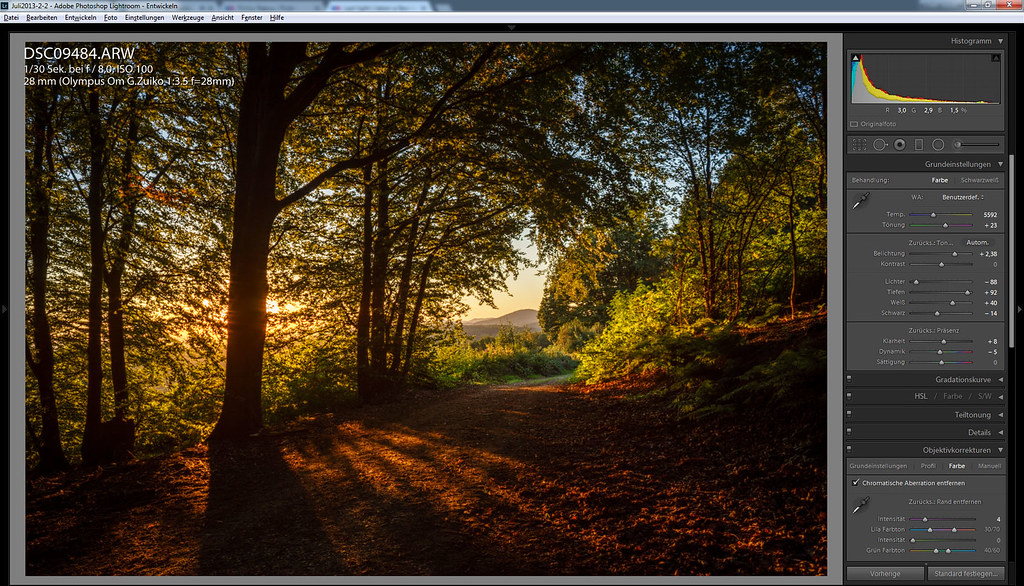 I am quite lazy when it comes to post processing and I very rarely spend more than 2 or 3 minutes on a single image. Usually I apply one of 5 profiles I have created for similar scenes, push 2 or 3 sliders and then I am done.

This profile lifts exposure of the whole image by a good two stops and the shadows a lot more. My goal is to keep detail in highlights and shadows but only just so. I also used the camera standard profile which can create some very nice and warm colors but it adds too much saturation which I had to dial down a little.

An that’s it. I still like to look at the image because for me it resembles a warm summer evening quite well and I like to remember summer, now that autumn is nearly over here in Germany.