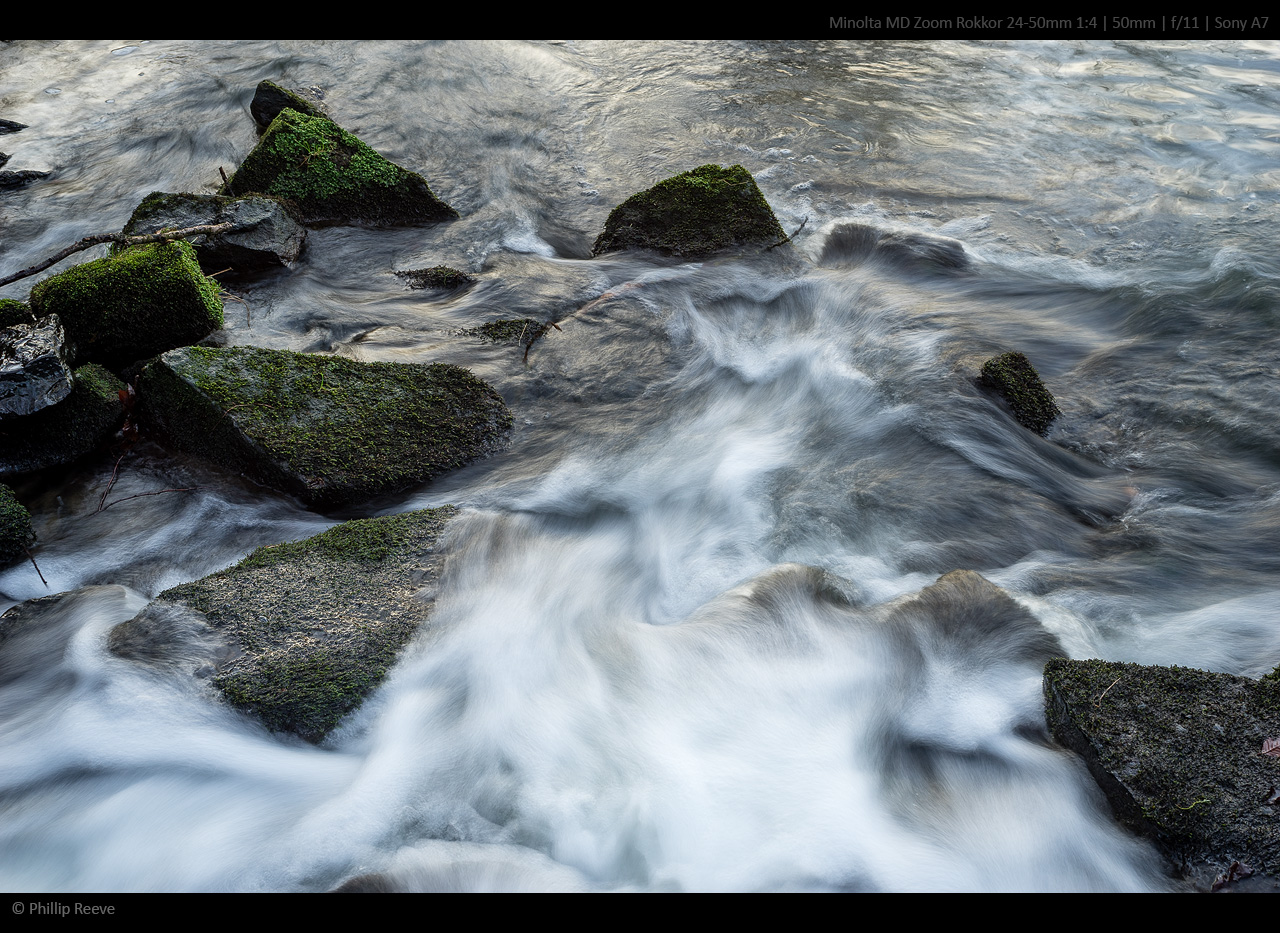 For me it has been a great practice to visit the same subject close to my home again and again and it has taught me many things:

Well that’s at least how it works for me, but I think it won’t be that different for you. I wrote this article mostly to reflect on my own photography but I hope it might give you an idea or two as well.

The intimate landscape close to home

There is always a temptation to dismiss any subject close to home and to strive for the grand landscape, which is several hours away from your home, so you will only rarely find the time to get there.

But if your subject is close to your home you will be able to visit it much more often and you will spend much more time photographing. Thats a good reason to find interesting subject matter close to your home, because my own experience is that I took many of my favourite images close to home. Here I know my subject matter and can react to the  light, my compositions are better and I find the more interesting perspectives.

The more intimate landscape images I take won’t wow the people and give me as many likes on social media as more dramatic images, but to me they mean more.

Now it is easy to say that there are no interesting subjects in your area, but have you looked close enough? I have passed many interesting subjects countless times before I realized their potential. Often you need the right season  for a picture and there is a short time frame of only a few days in the year were you have the right conditions to take an image.

The Process of Exploration

Now I will talk a bit about how I explored a weir about 10 minutes away from were I live. I like to do my running in nature and one of my favorite routes leads by this scene but I ran by it countless times without realizing it’s potential.
I think the weir was used until the 1920’s to divert water to a nearby mill which is also a favorite subject of mine. Today it is more of a ruin but there is still a very small waterfall, a nice bride and two beautiful trees.

The Oak – struggling with composition

I think I took my first images at that place on December the 12th  2013 when I passed it by chance in great light: 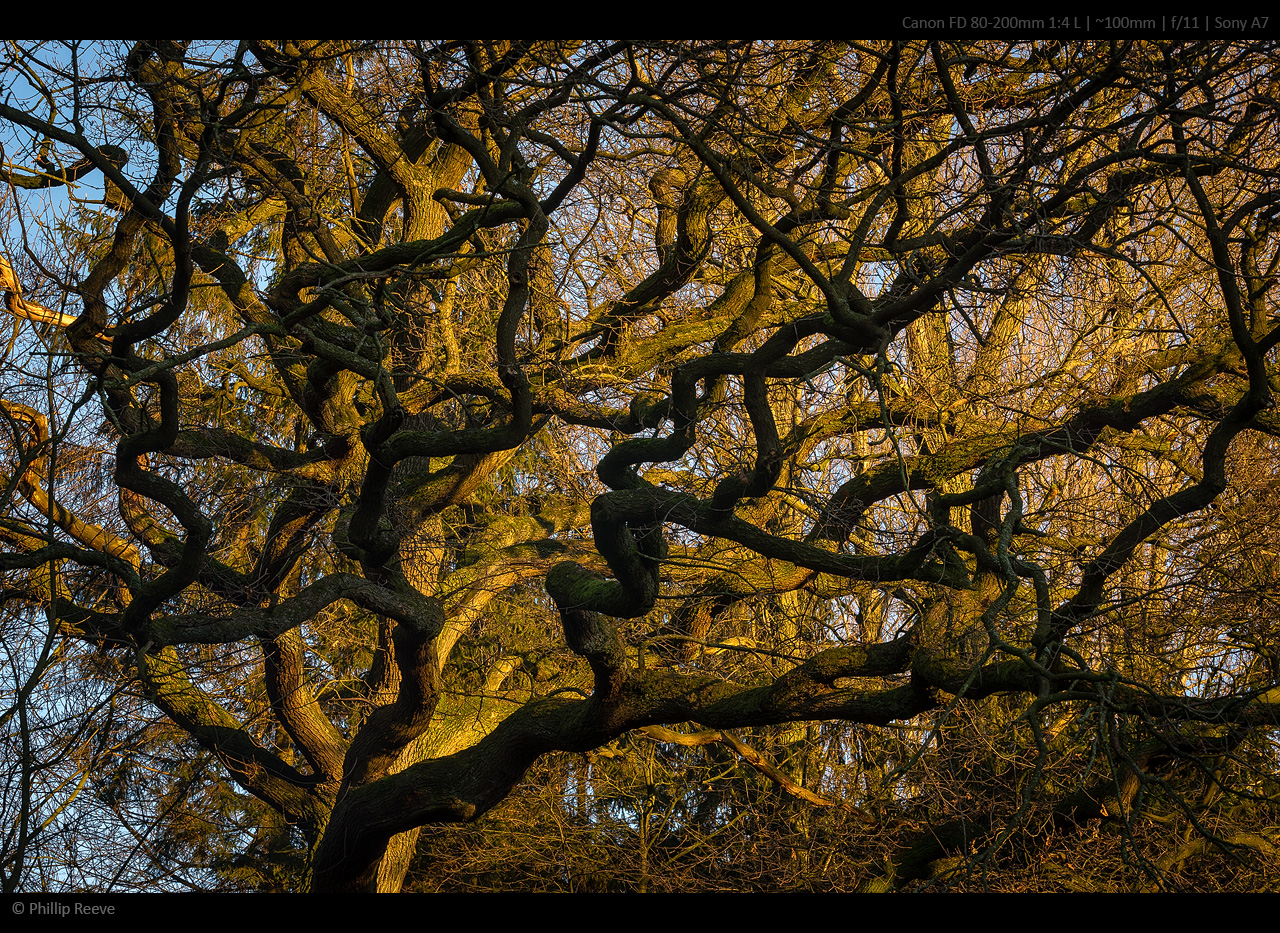 It shows an old oak close to the weir with branches which form an interesting pattern.I think the composition is not the best because it is too complicated, the dark branches in the foreground don’t align with the ones in the bright ones in the background.

Until today I am  fascinated by the wild patterns of the branches but so far I haven’t taken a really satisfying image of them.  I
Here is another one, this time not at 100m but with a 24mm lens. 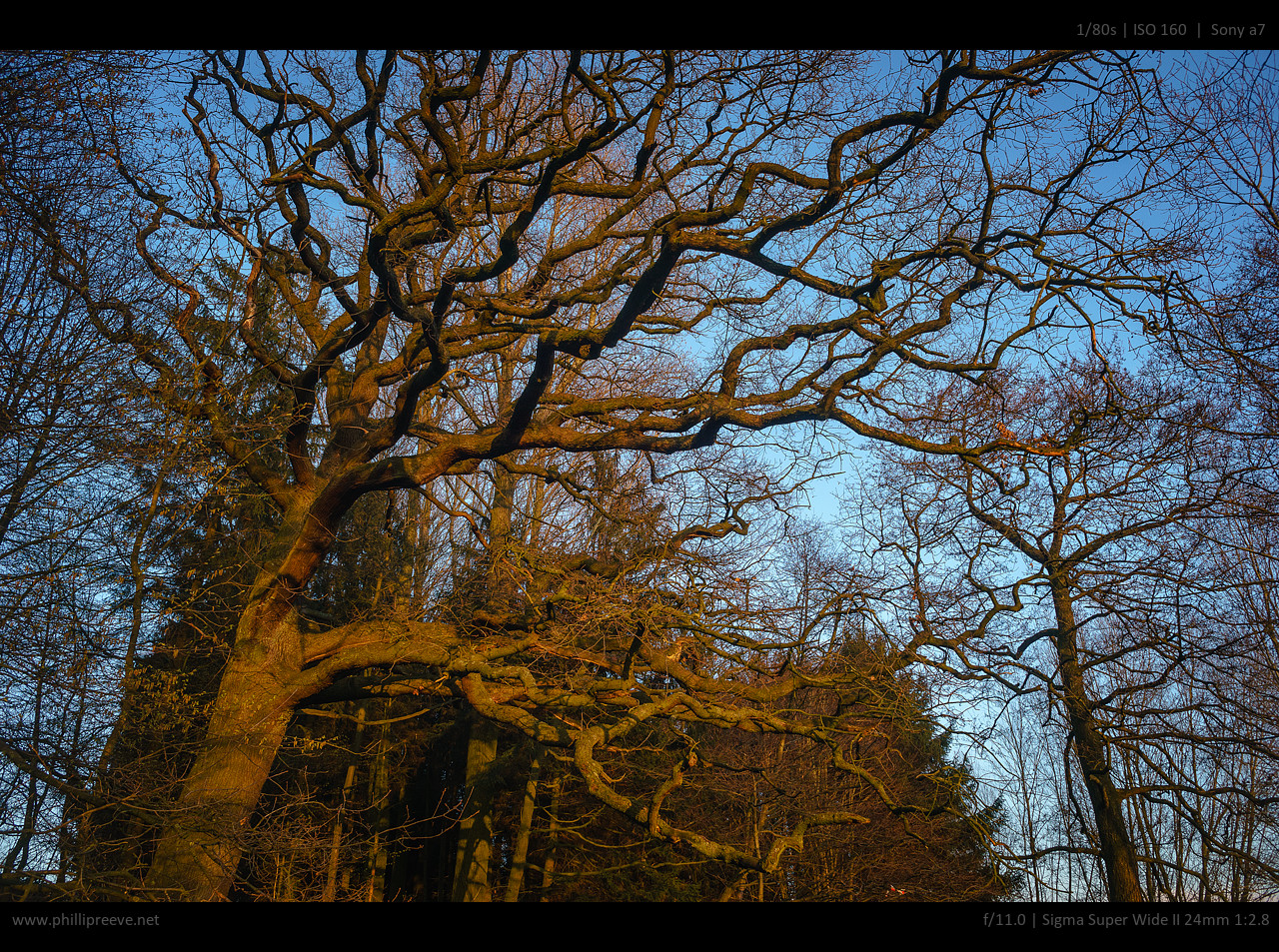 I think it is a better image than the first one but still too complicated. As the year progressed the sun set further in the west were it is blocked by some trees so I will have to wait until September or October for my next attempt to photograph those burning branches. I have discovered a different perspective from below the tree which might work better.

The bridge – Light and Season

10 meters from the oak there is an old bridge which was illuminated by the very first light around the winter solstice: 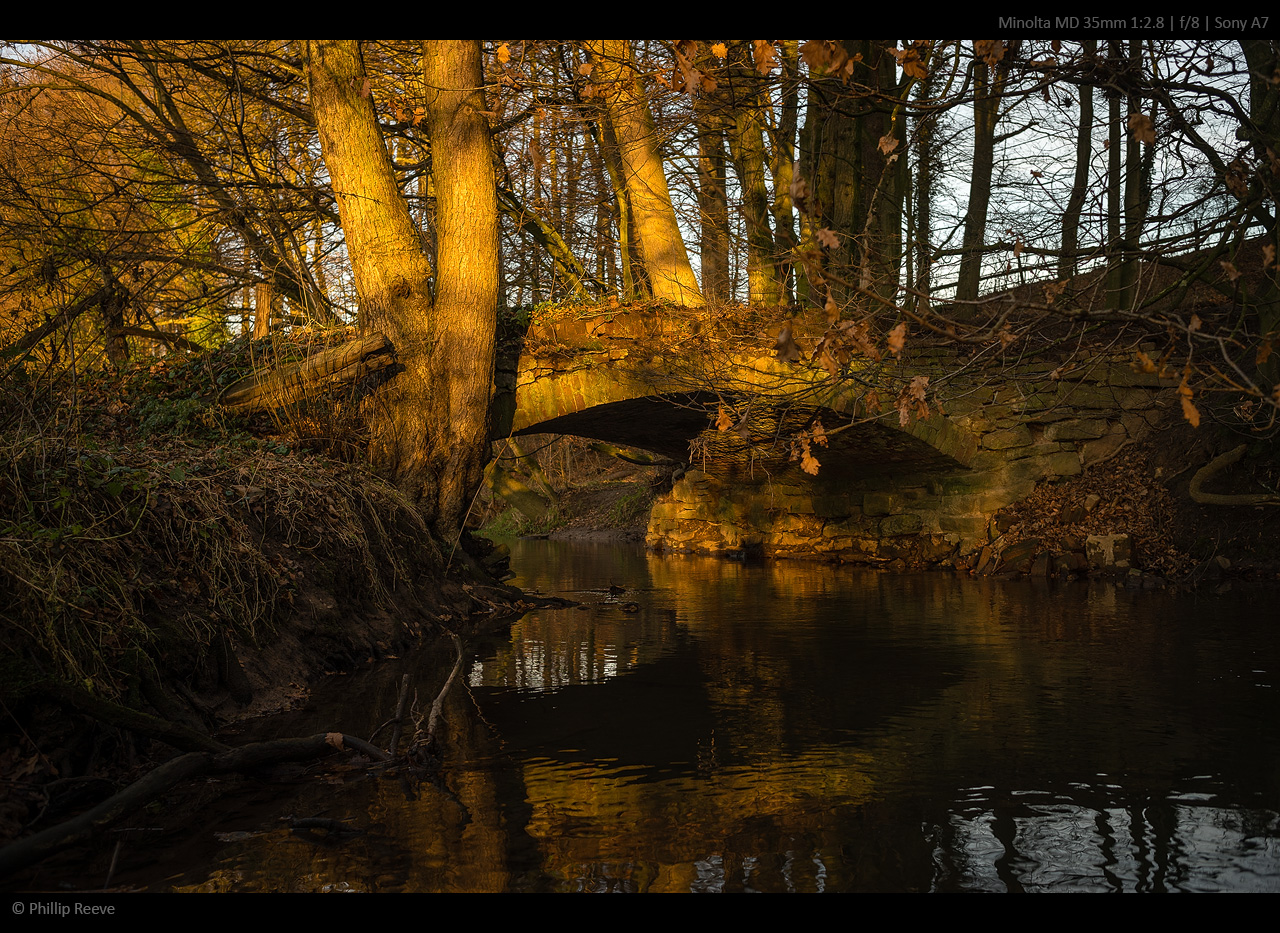 I think it is a decent image but I would really like to try some different perspectives. But without the golden light of the rising sun it is not a very interesting subject, so I will have to wait several months until the sun rises at the right place again. 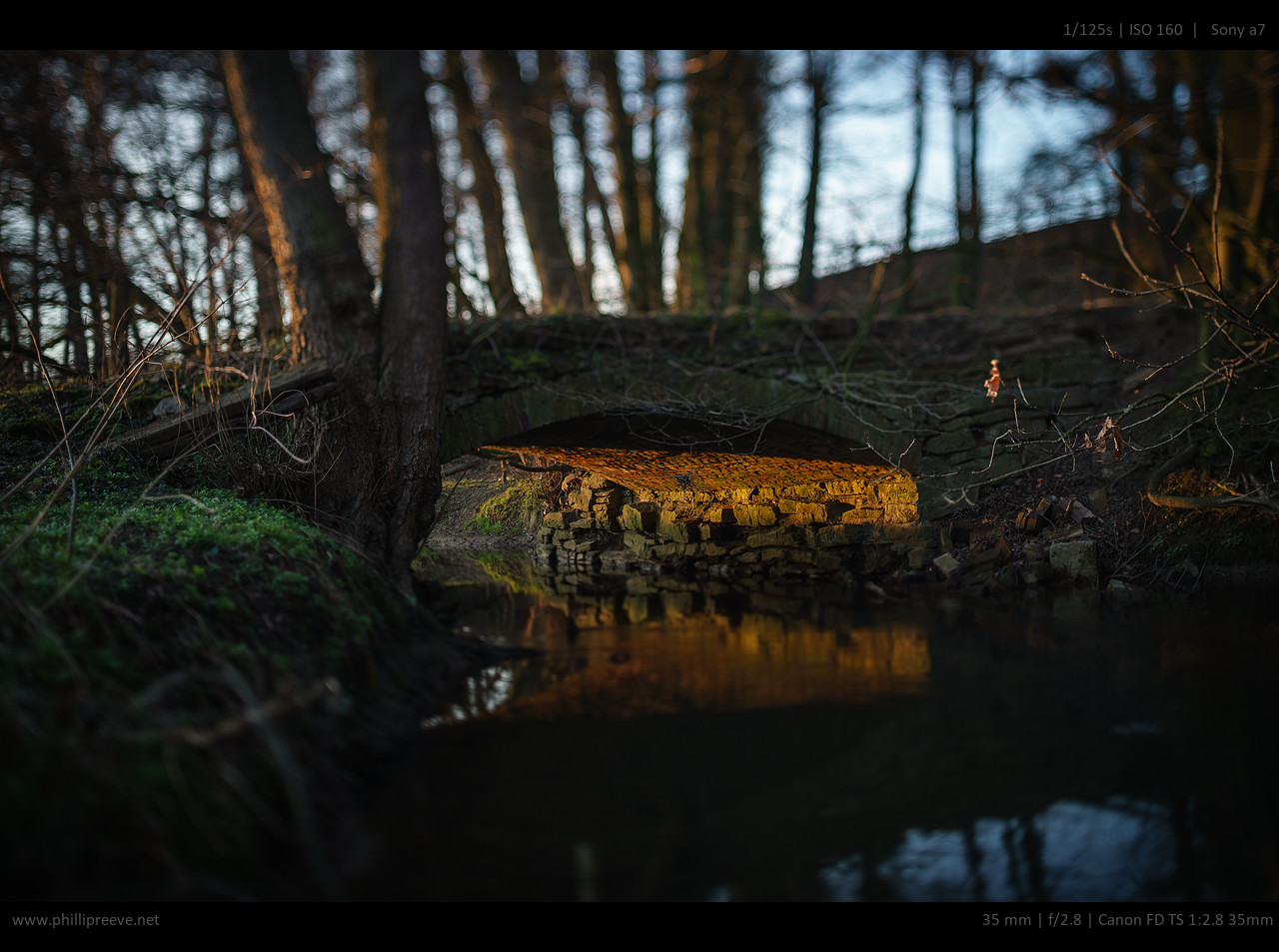 Now the sun was setting in such an angle, that it illuminated the arch from the back which made for an interesting image as well.  Because I wanted to focus the viewers attention on the center of the image I used the tilt-function of my lens to blur the rest of the image. I think I overdid it somewhat.

6 days later I took another image from a slightly different perspective and with less tilt, I prefer the first one because I like the composition better, but I like the less obvious tilt effect. In September when the sun is in the right place I will try to recreate it with a really low point of view and a medium level of tilit. 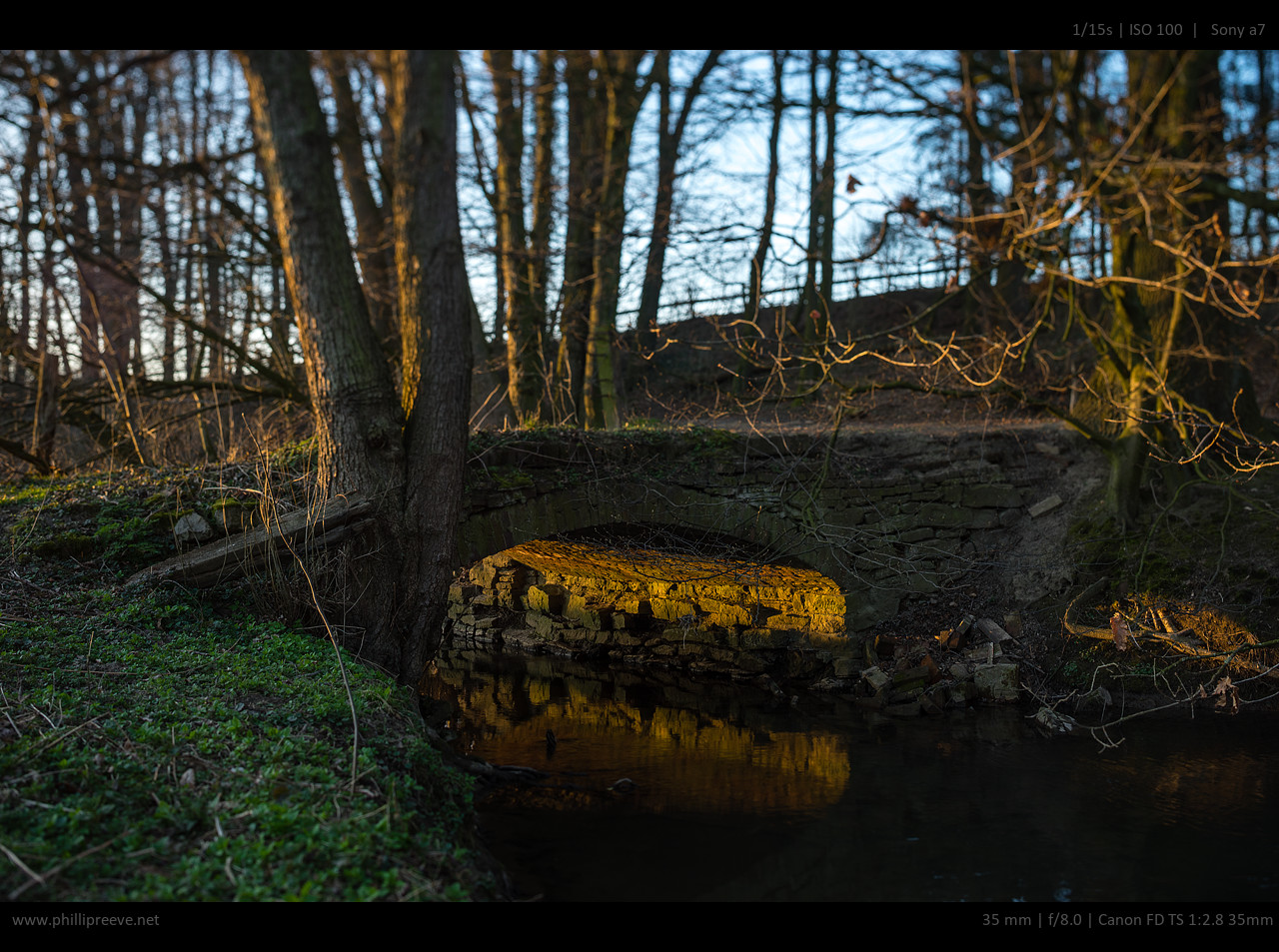 I would really have liked to see the snow covered weir in the first or last light of day but we only had a snow cover for less than a day last winter, I am looking forward to next winter for more snow. 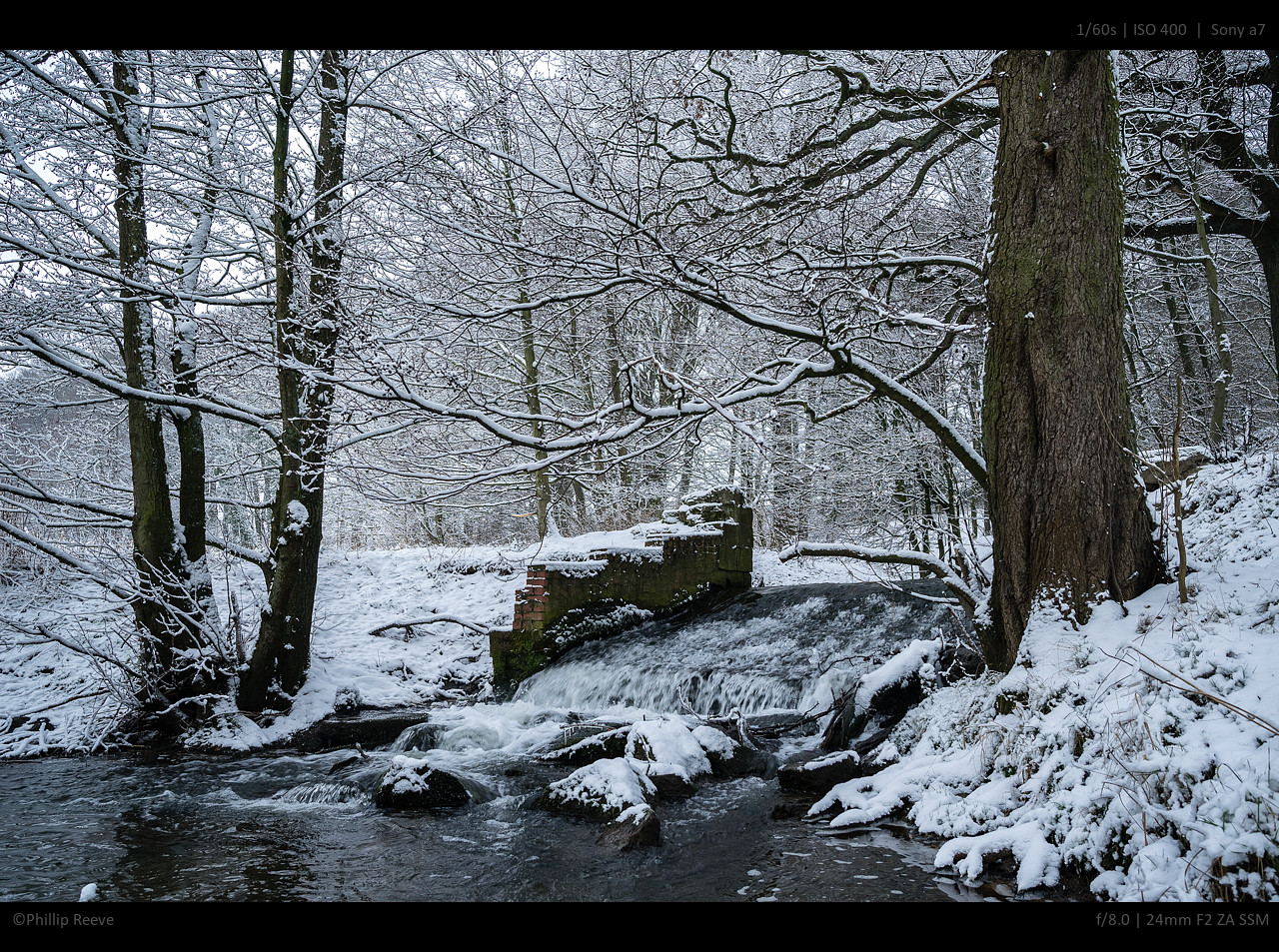 You can see the oak from the first image in the upper right part of this image. In the center you see the old weir which was diverting water for a  mill some 500 meters down the brook which is also a favorite subject of mine. 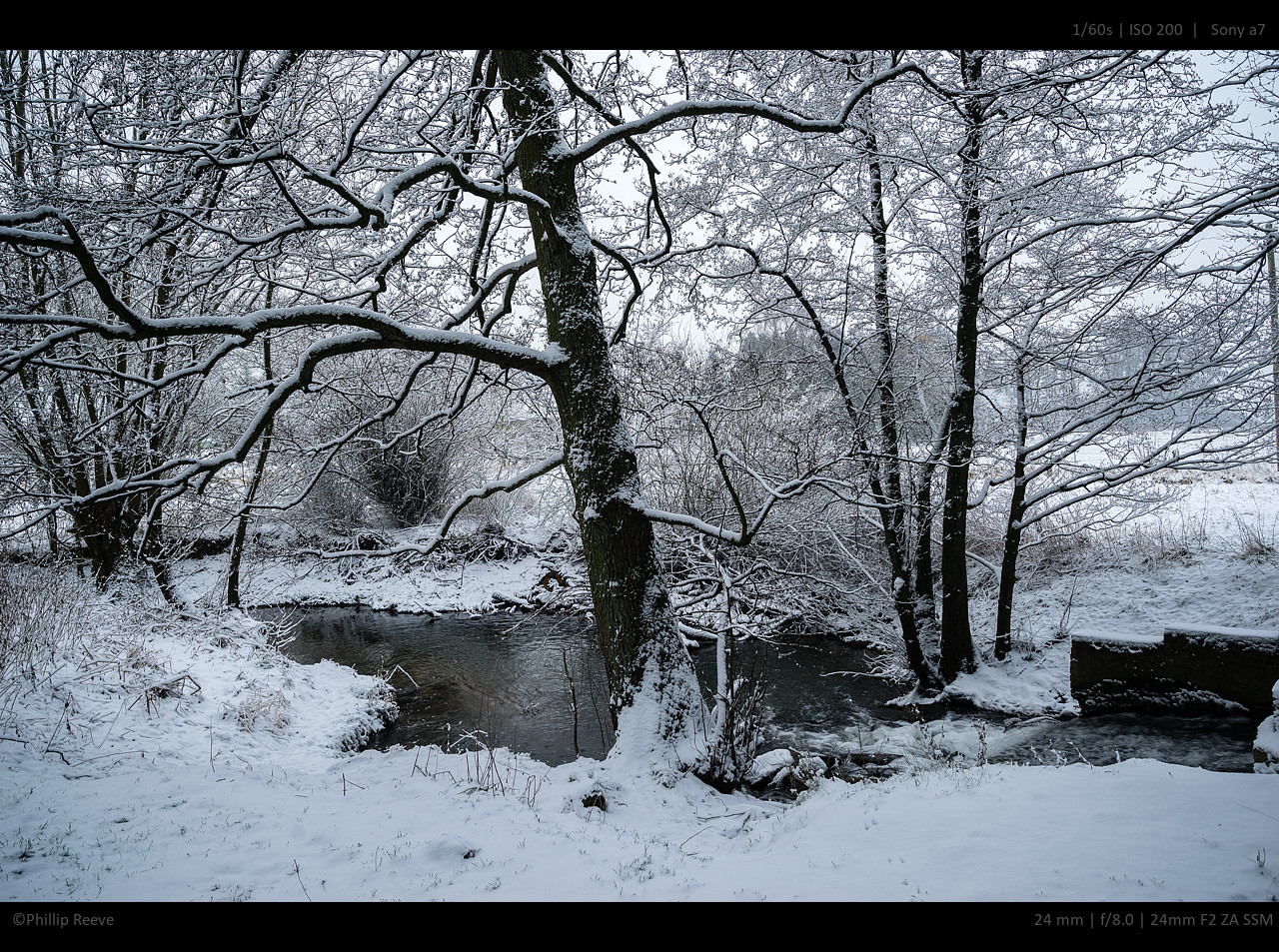 I think the composition for these images is okay, the snow cover simplifies the scene a lot, but the light in these is not very exciting. So I have to wait and hope for better conditions next winter.

A few days later I took the following two images which show a branch which is crusted with ice and illumined by the early light. 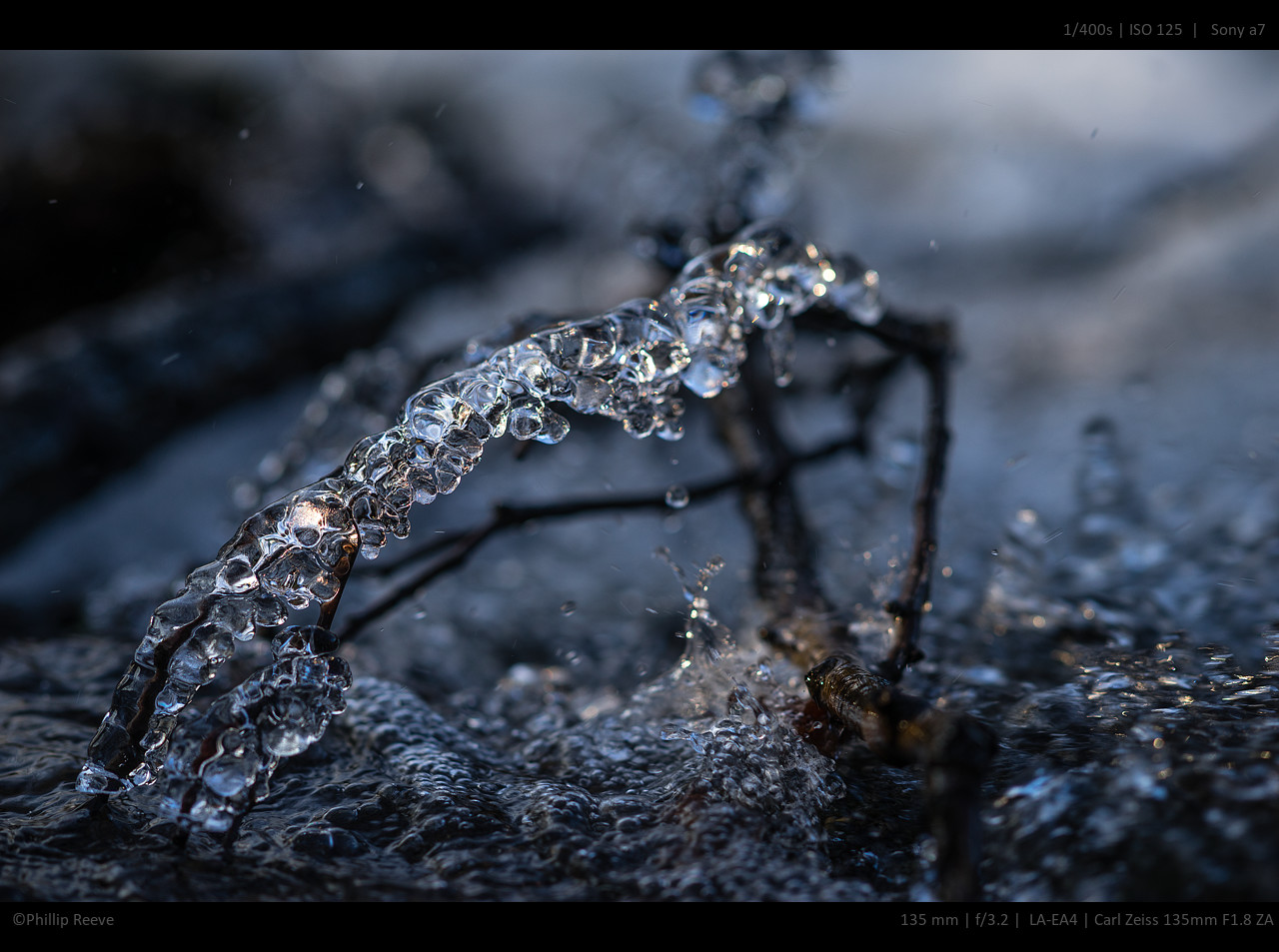 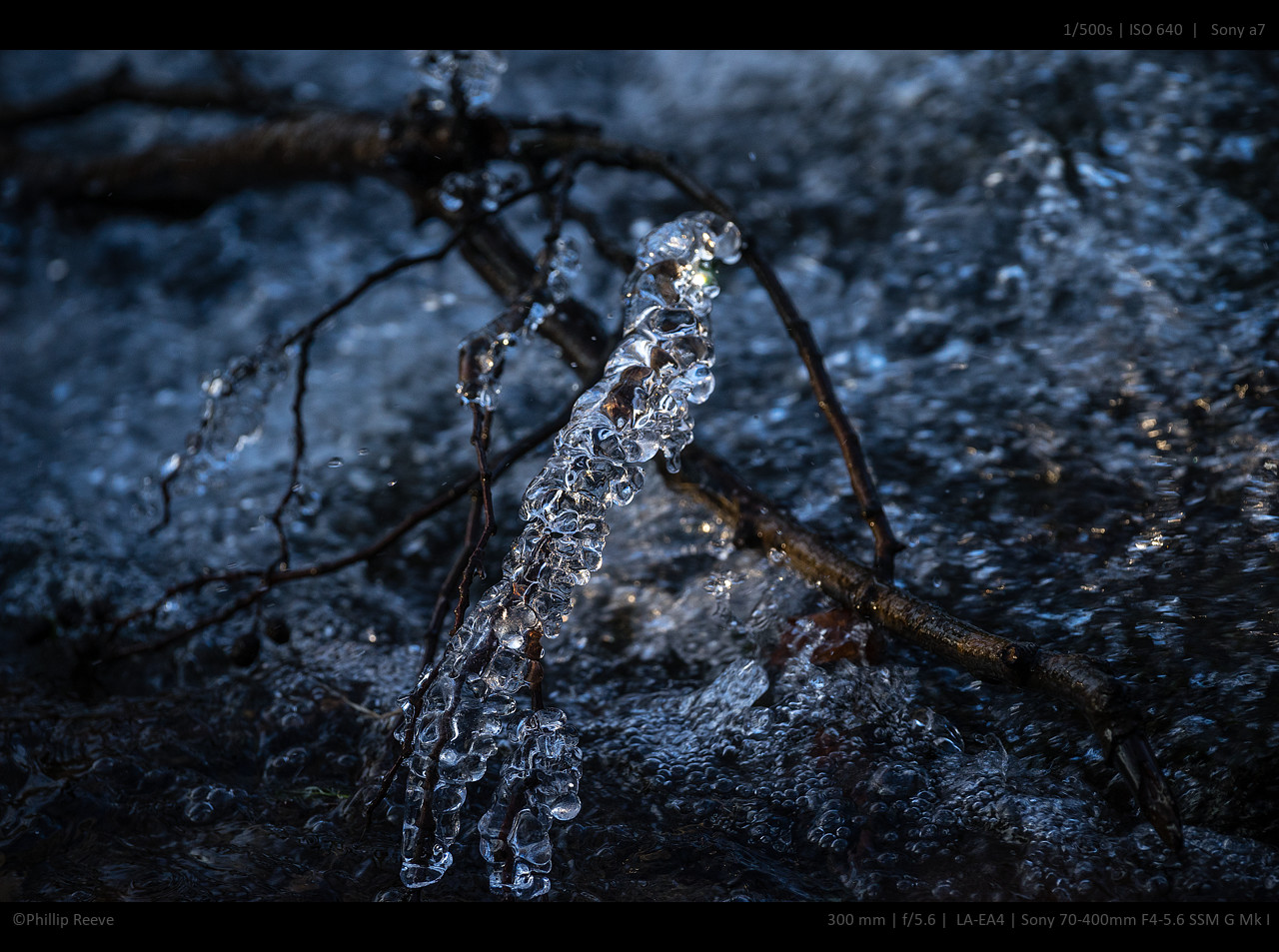 I like the colors and the contrast in both images but again the compositions are not that great and I think both images are a bit too complicated. Next winter I will try to either use a very short shutter speed to literally freeze the water or use a long one and f/11 for more DOF and smooth water. I might also develop them a bit brighter.

In spring I began to discover the weir itself a bit more and explore the moving water a bit. 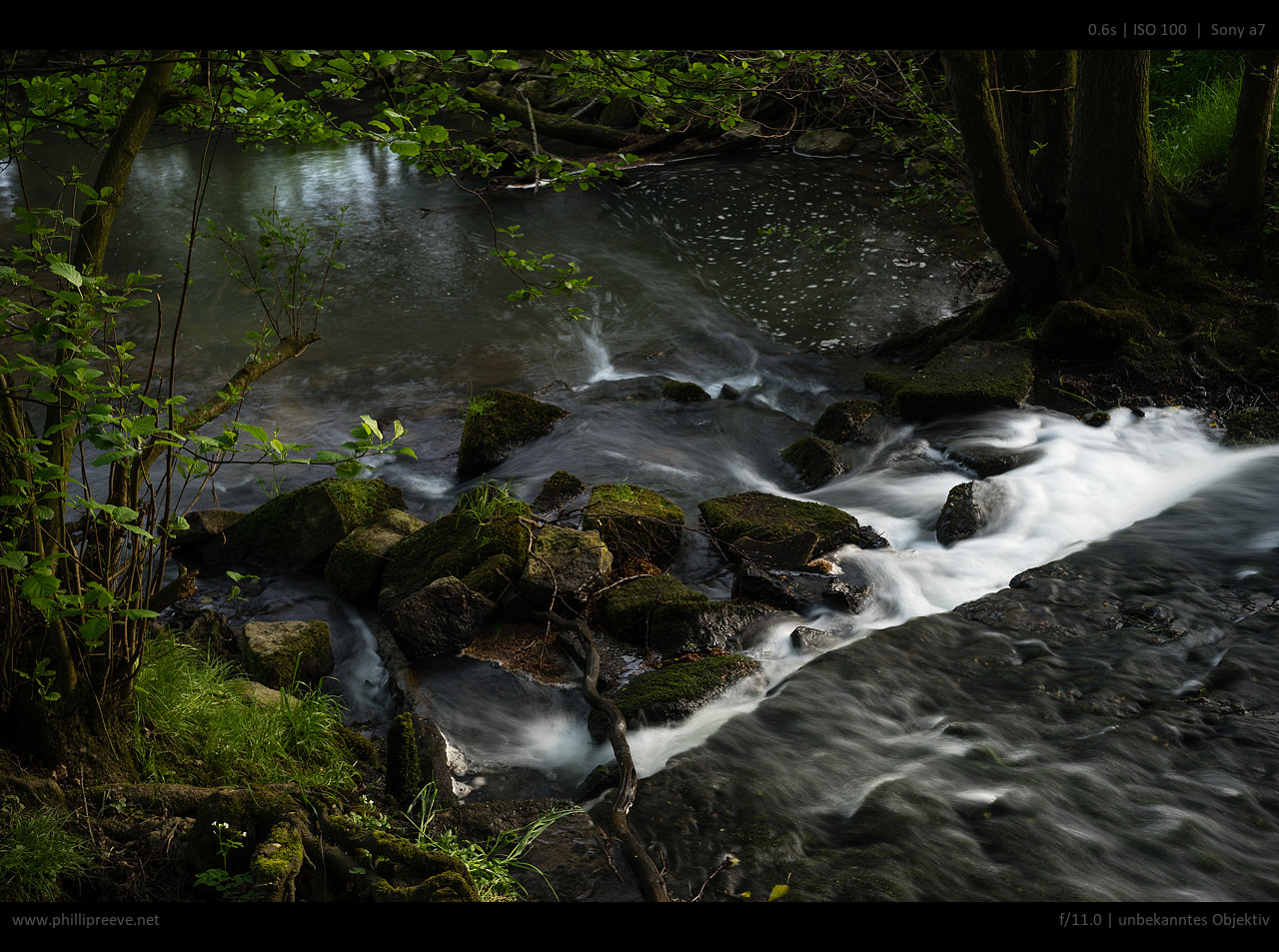 I wouldn’t know how to really improve this image, the light is good, I like the composition and the shutter speed gives a good impression of the movement of the water.

The water was my point of interest for the coming months, in April I took this image: 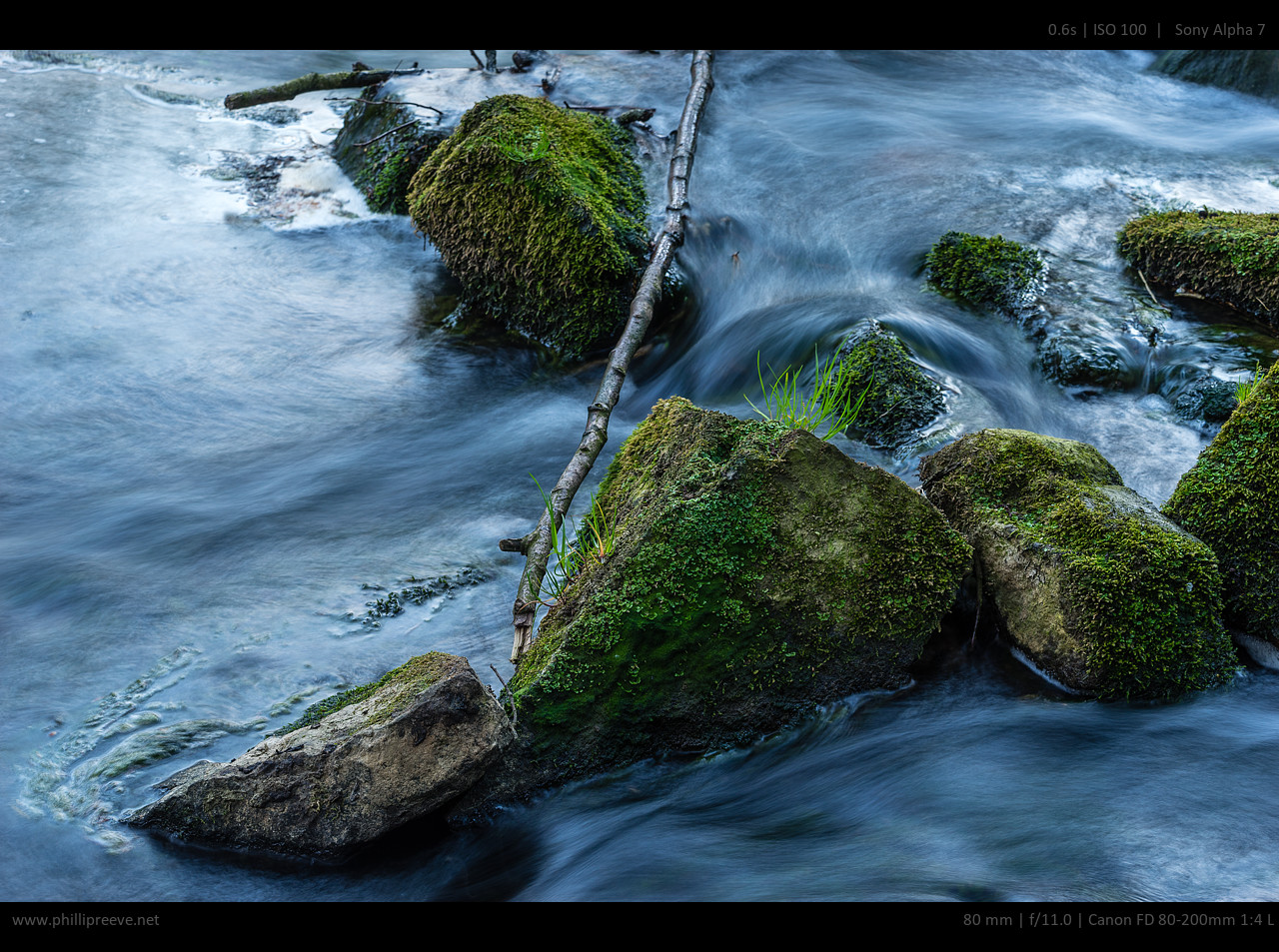 I like the contrast between the blueish water and the green stones. I am not that sure about the branch, I think it detracts from the image a bit.

Two or three weeks ago I got two important ideas from Radomir Jakubowski’s blog (in German):

So these two ideas really helped to improve my images.
At first a total: The polarizer increased the saturation of the leaves a lot and this image hangs on my wall know because it captures the place quite well in my eyes. 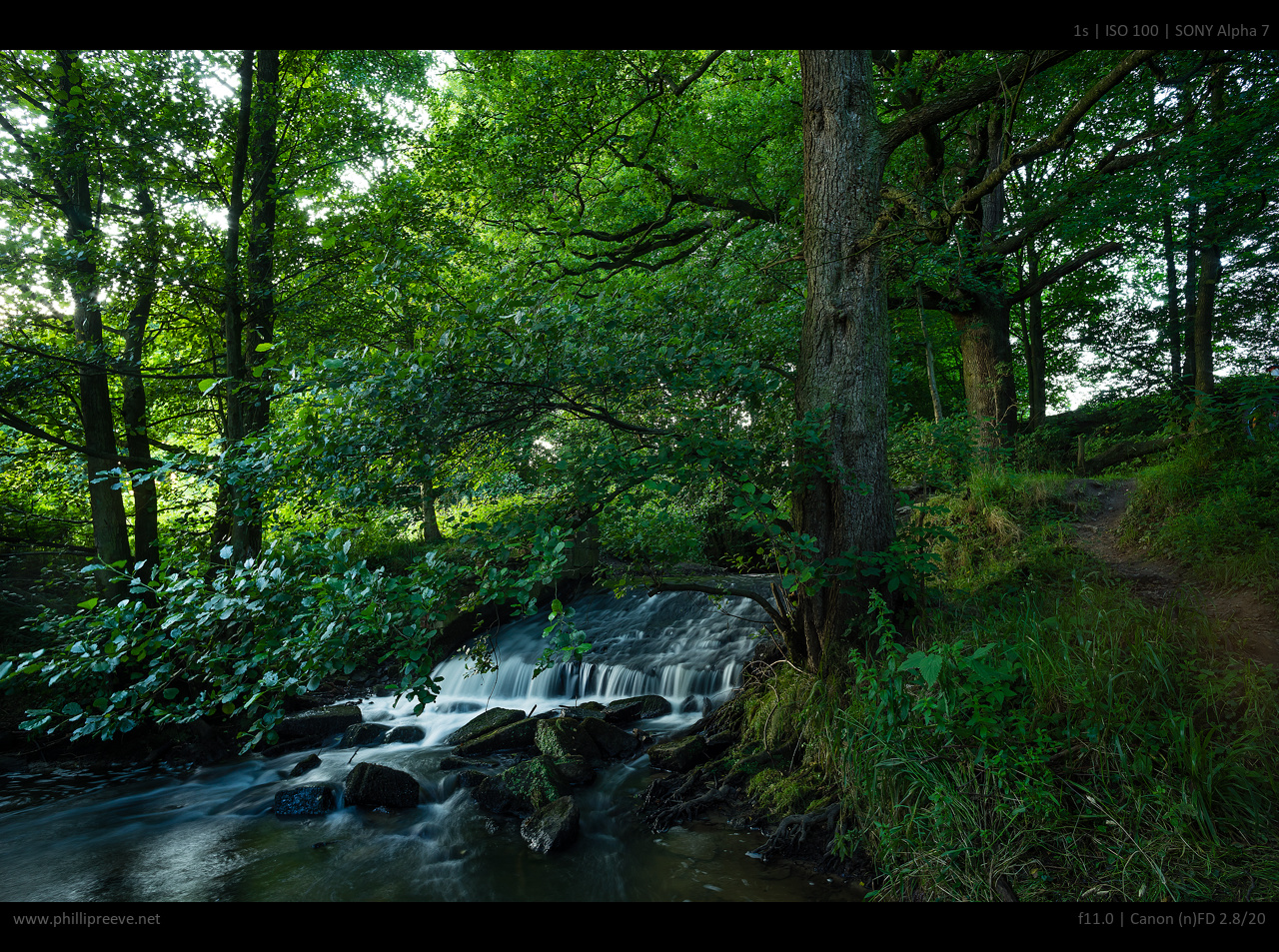 Now an image taken standing in the middle of the brook. I think I developed it a bit too dark but I like how the new found perspective simplifies the image. 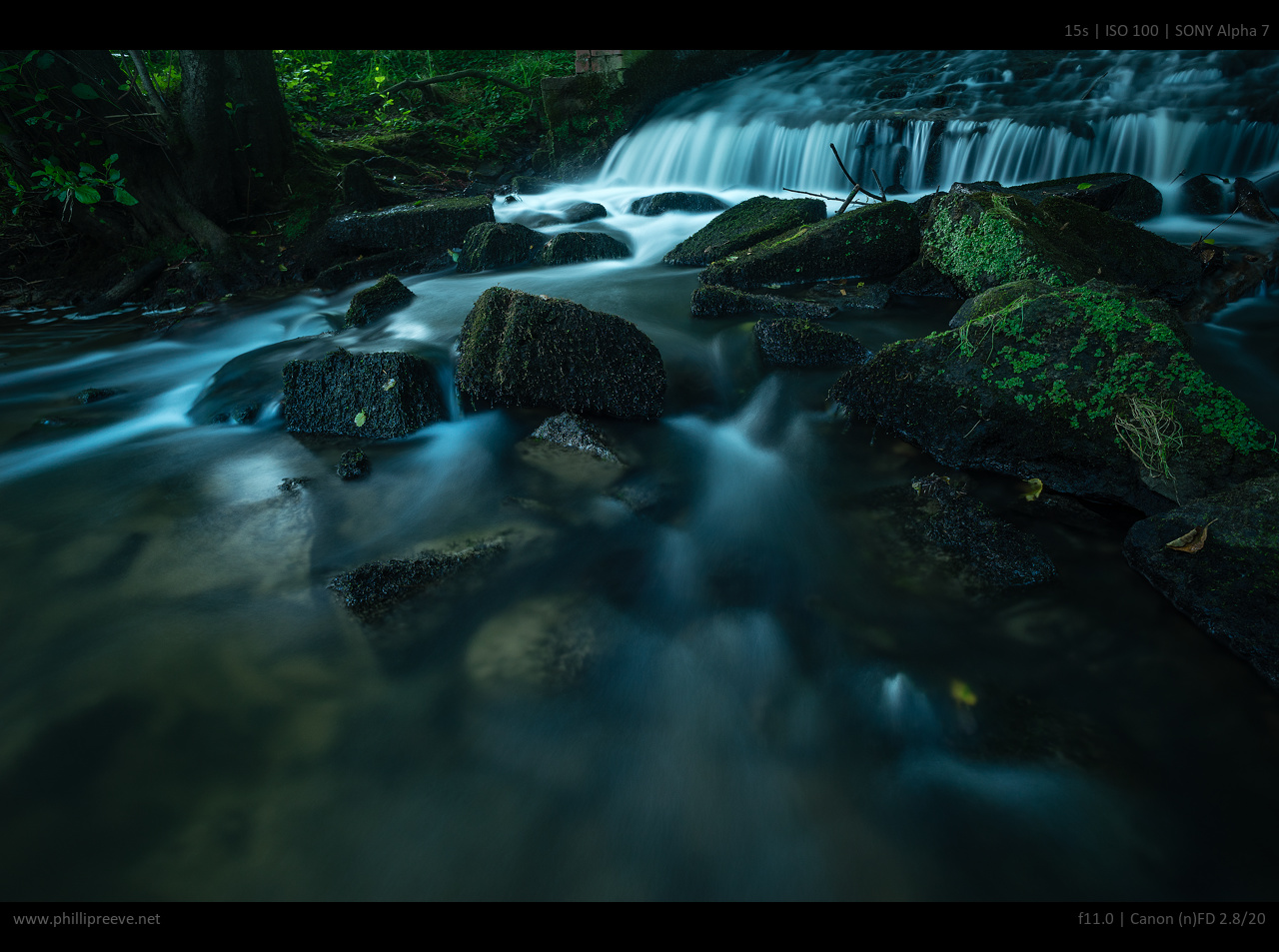 This is my best image so far. The composition is quite simple and the rather dark stone is framed by the brighter water. 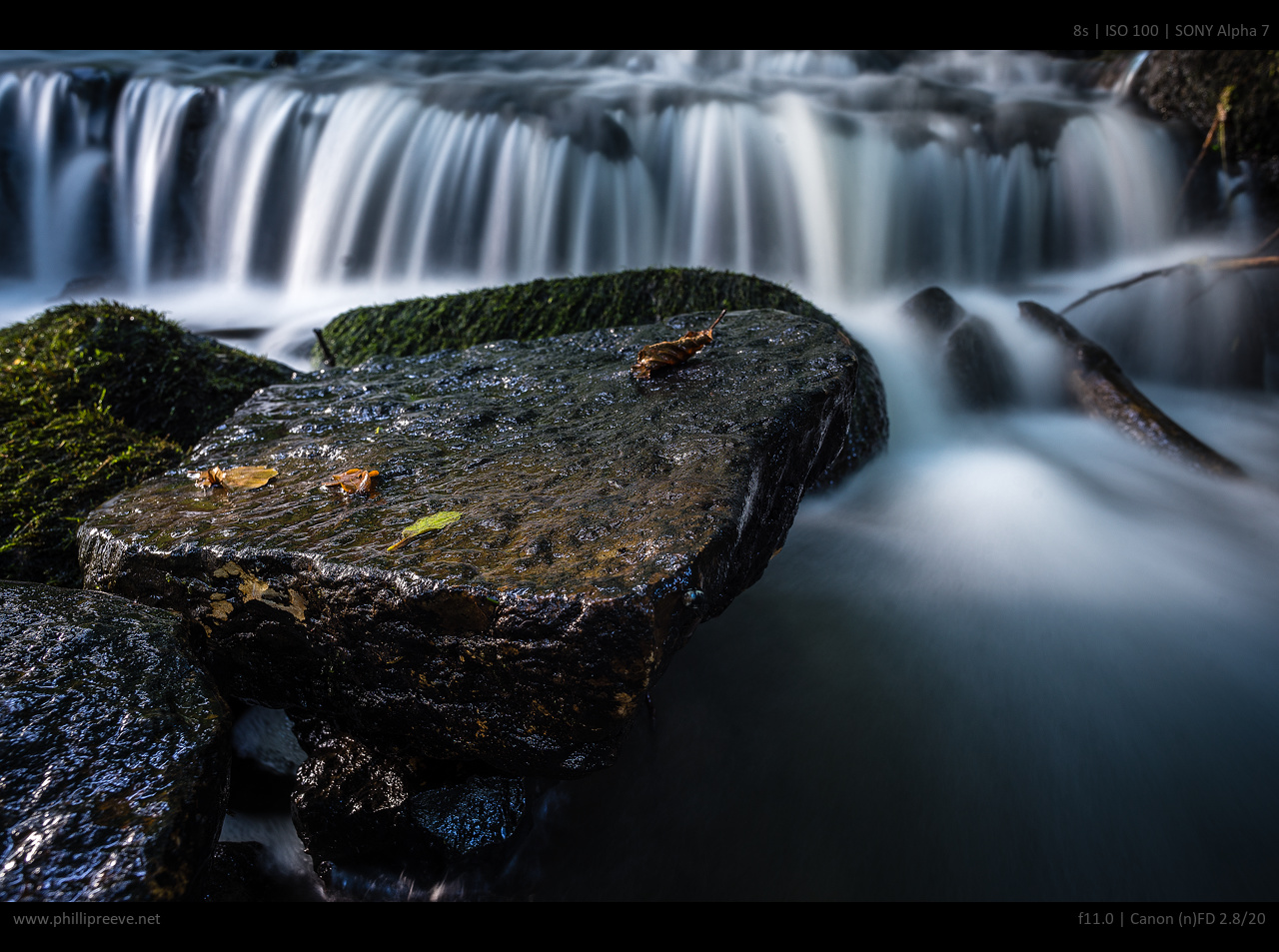 Okay, this article turned out to be more of a self- critique. I certainly gained some interesting thoughts from it, I hope it gave some ideas to you, the reader as well.
I would like to hear your ideas and opinions as well, just leave a comment!