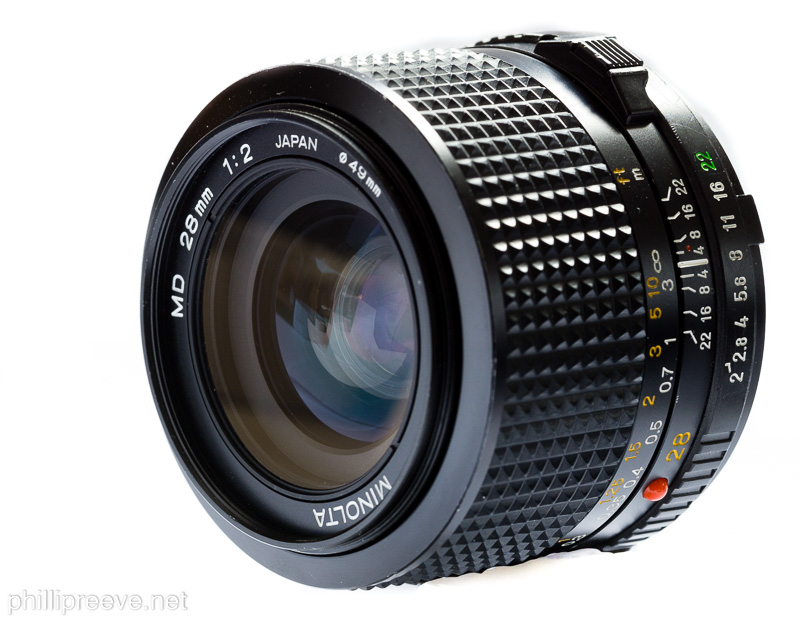 Released in 1981 the Minolta MD 28mm 1:2 is Minoltas joungest manual 28 mm lens. In this review I test it on the a7II to see how relevant it is today. 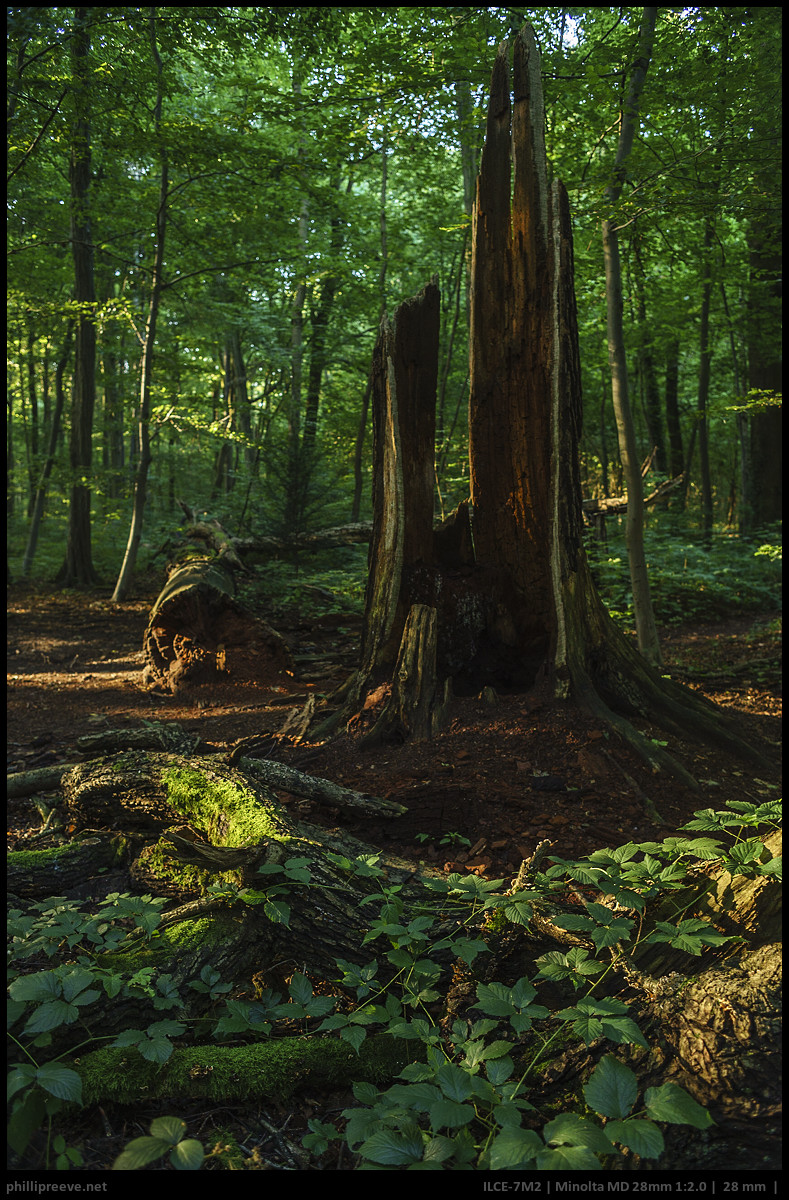 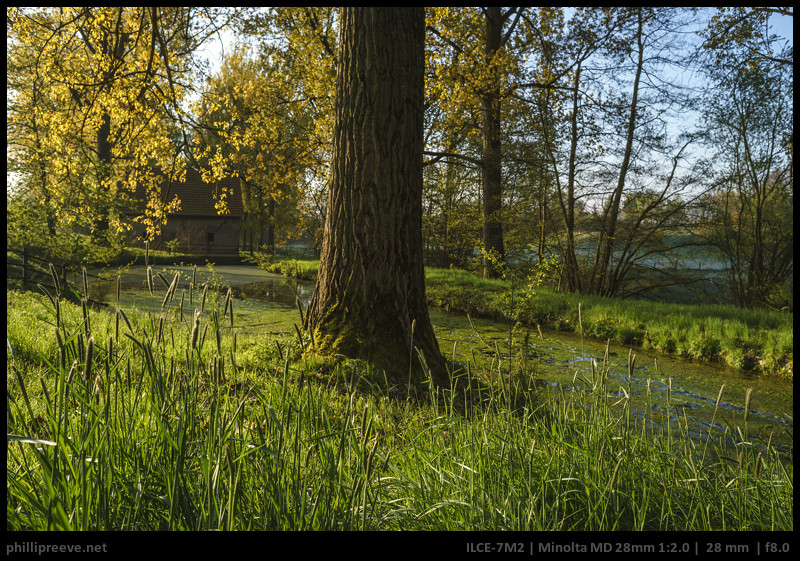 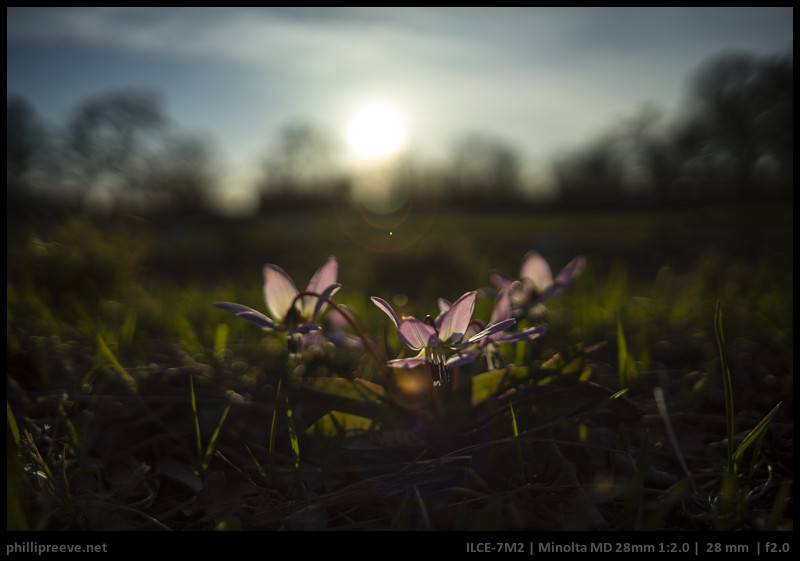 I think the older Rokkor version serves quite different purposes than the newer plain MD version. The Rokkor version is a joy to use and a low contrast character lens wide open with decent but not great performance stopped down. The newer version still has quite a bit of character wide open but better sharpness and contrast. I is not quite as pleasant to handle but lighter and a strong performer stopped down. 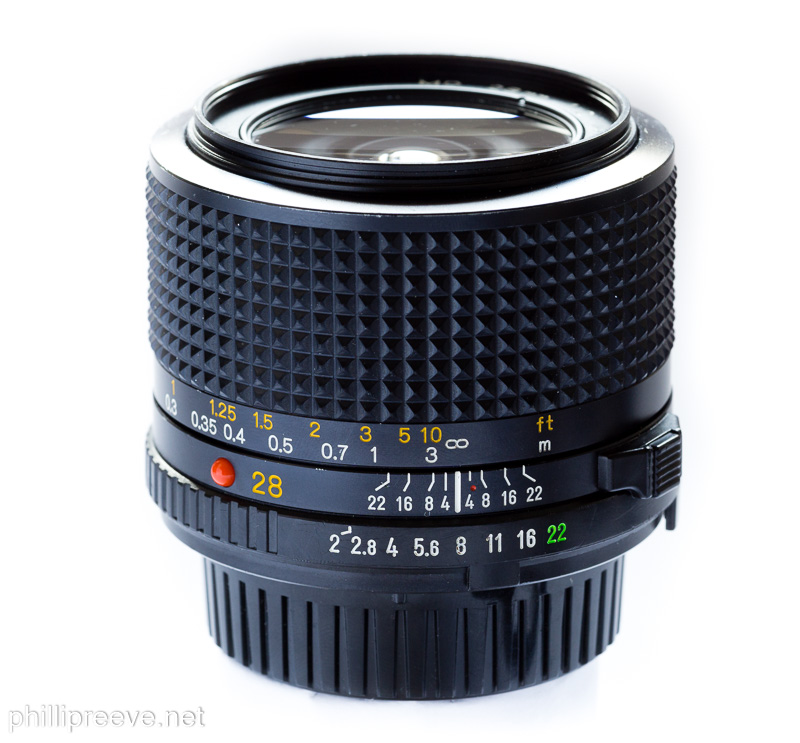 Minolta’s last generation of MD lenses still offers very good build quality by modern standards but compared to other legacy lenses they are not quite as nice.

The focusing ring travels around 65 degrees from 0.3 m to 1 m and a further 18 degrees to infinity. This is a little steep for a wide angle but not much of an issue.

The rubberized focusing ring offers good grip and a pleasant diameter. The resistance is higher than I like on my copy and I have made a similar experience with other plain MD Minoltas.

The aperture ring is made from plastics and shows some sign of usage on my otherwise little worn copy. It feels a bit cheap and while the click-stops are distinctive enough I have seen better implementations. It has no click-stop between f/2.8 to f/4 and f/16 to f/22 but half-stops in between. 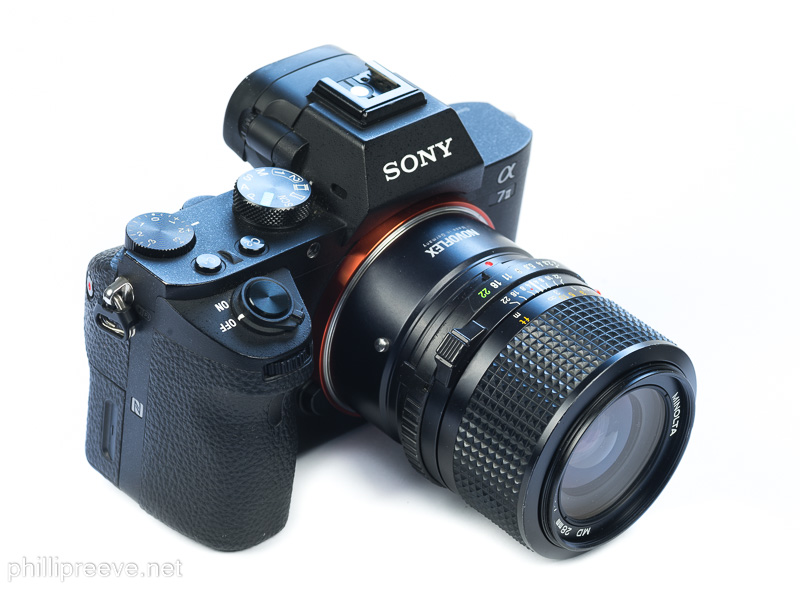 I like the native hood which doesn’t do a lot to shield the front lens but it is small and protects it well from any damage so that I can use it without a lens cap.

At 265g and with a length of 50mm the Minolta is small but not tiny and well balanced on the a7 series. 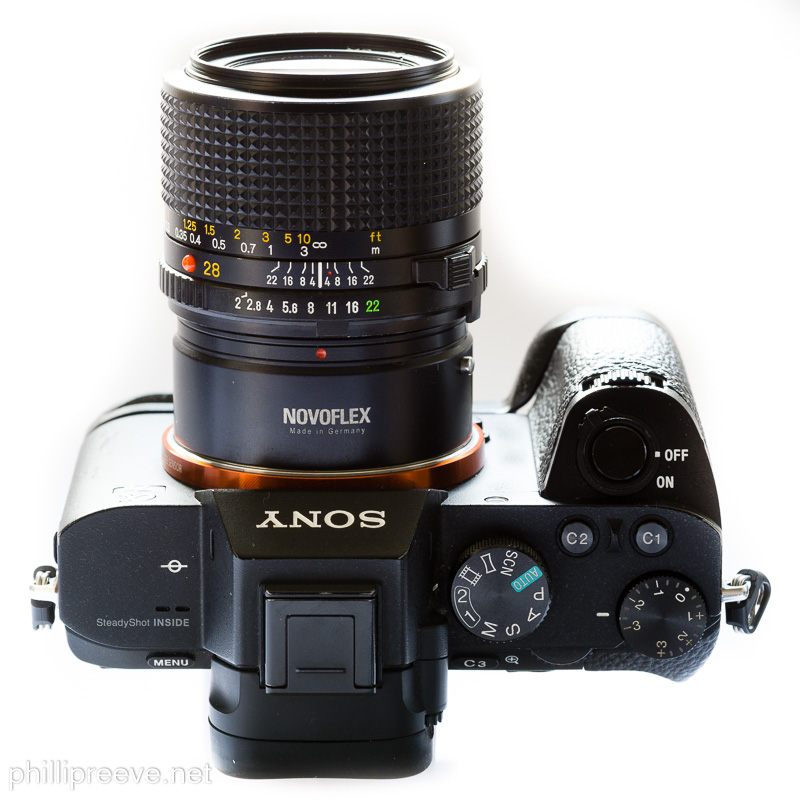 Flare is definitely an issue with this lens. If you have a stronger light source in the image you get a very big ghost and veiling flare in a large area of the image. For me this is a limiting factor since I like to shoot backlit scenes. If you like the effect though it might be just the lens for you. 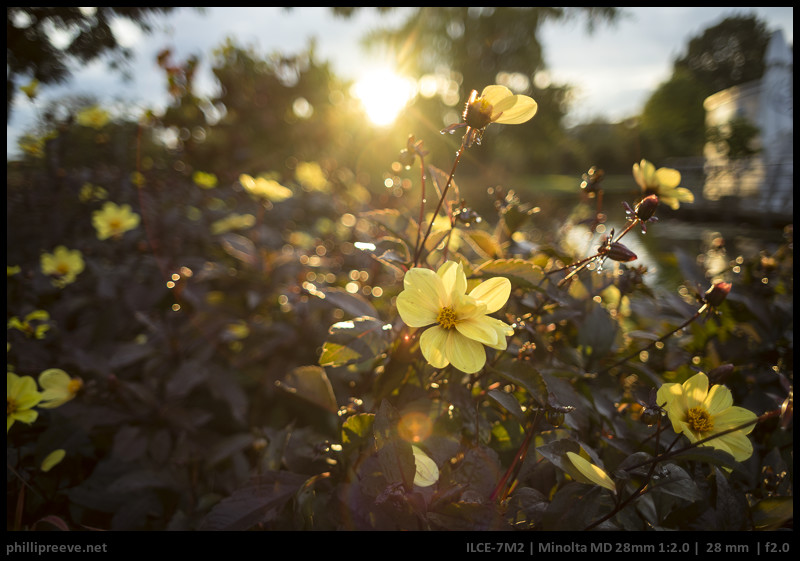 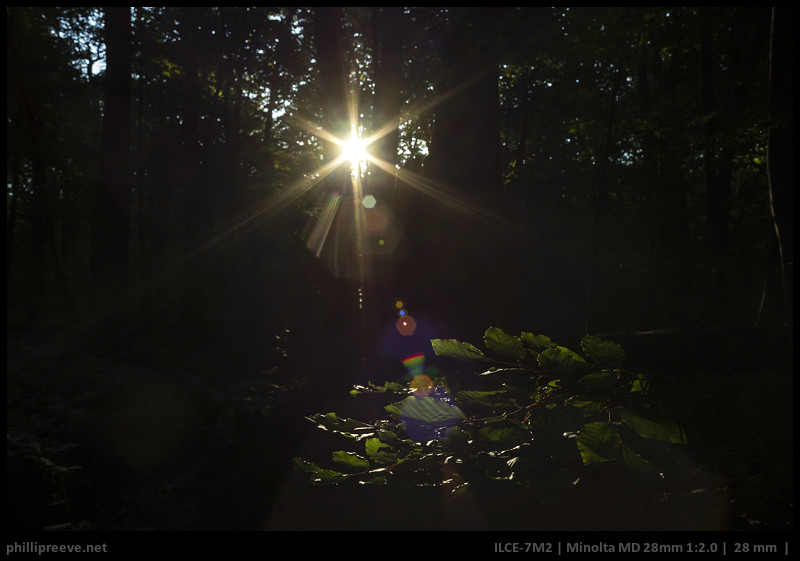 The Minolta MD 2/28 has rather busy bokeh wide open. Stopped down you get hexagonal oof highlights because it only has six aperture blades but bokeh gets smoother.

Cat-Eyes are not much of an issue: 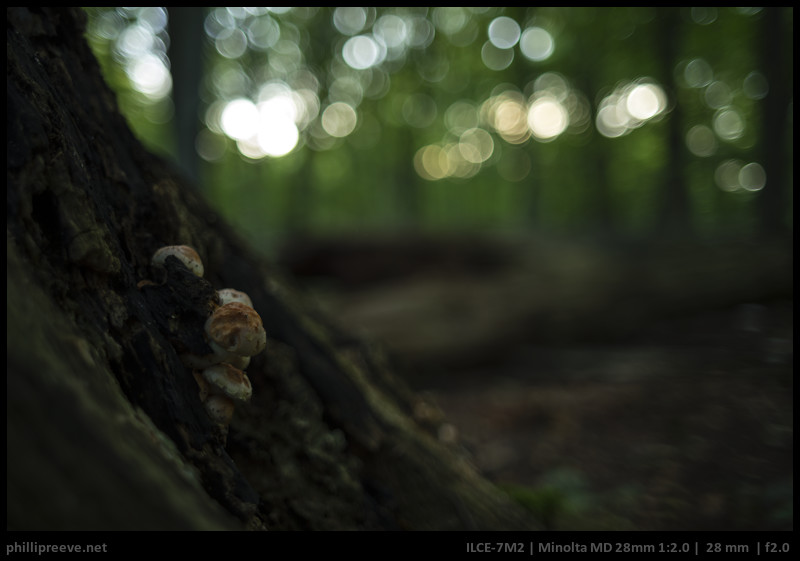 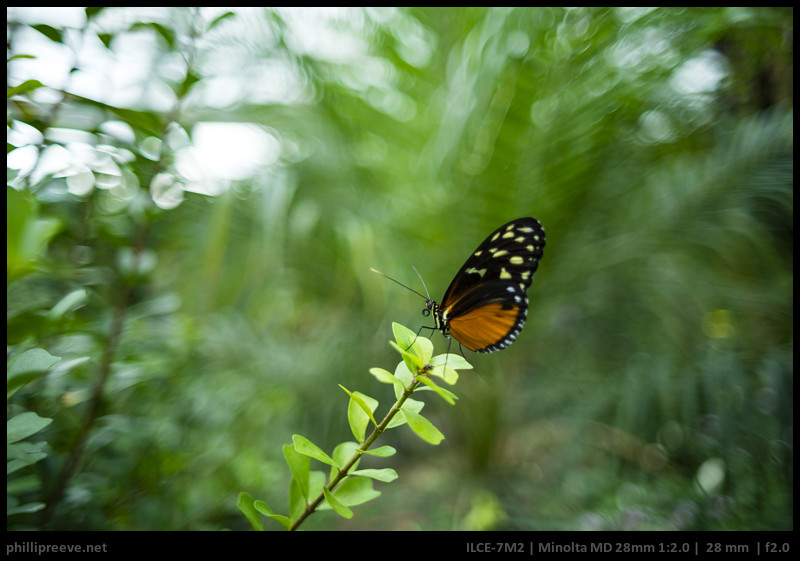 At longer distances bokeh is a bit smoother: 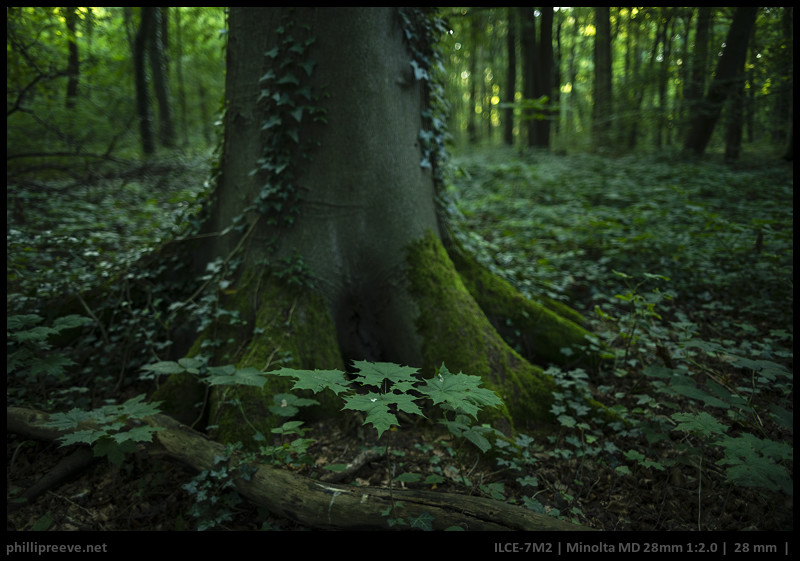 Lateral CA is really low as well. I was surprised by that. 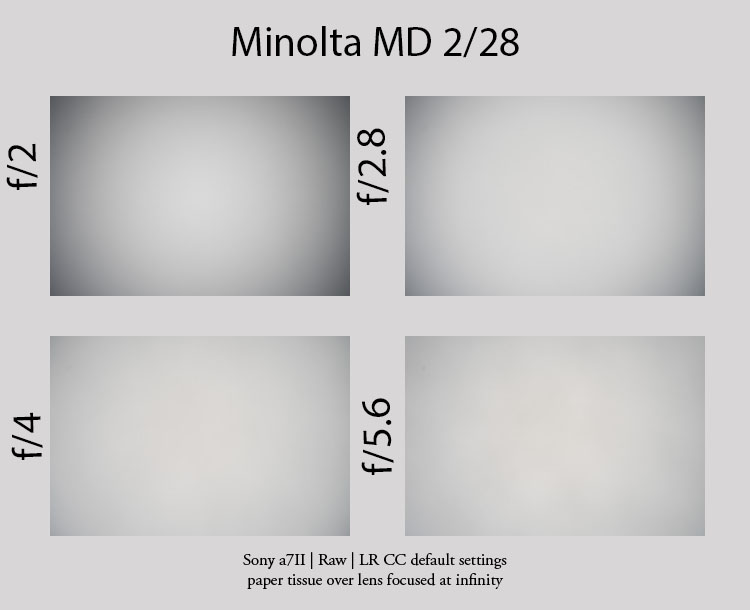 This is an average performance for a fast wide angle and can be an issue for some applications.

The Minolta MD 2/28 shows a moderate amount of barrel distortion.

f/2: Good resolution in the center and midframe but overlaid by spherical aberrations which reduce micro-contrast. The corners retain some resolution but because of strong SA they appear pretty soft.

f/4: Very sharp across most of the frame, only the extreme corners are still soft.

f/11: Slightly softer in the center, a tad sharper in the corners.

For a lens of its age the Minolta turned in a very good performance but you will need to be aware of the MD 2/28’s limitations to get good results. If you like images with high resolution but lower contrast you can use f/2 without hesitation since most of the image shows good resolution. But you have to stop it down to f/2.8 for good micro contrast in the center and to f/4 to get good sharpness across most of the frame. At f/8 the lens is tack sharp across the frame and will deliver excellent results for landscape.

Minolta MC/MD Rokkor 2/28: It is bigger and less sharp. I think it could be the more attractive lens none the less since the bokeh is a bit more attractive and handling a joy.

Olympus OM 2/28: The small Olympus is a little less sharp stopped down but I prefer the handling and it has higher contrast and better flare resistance but also higher vignetting. Bokeh is very busy as well and price is similar.

Sony FE 2/28: The smaller and lighter Sony is sharper at f/2 with higher contrast, much better flare resistance and much smoother bokeh so unless you after a character lens the Sony is the much more versatile option. Downsides are worse build quality and strong distortion which needs to be corrected as well as the higher price.

Pentax K 3.5/28: My favorite legacy wide-angle for landscapes is of similar size and sharpness with better flare resistance, higher contrast and less vignetting. If you can find one it is usually more affordable than the Olympus.

Voigtlander 2/28 VM: A modern manual lens which is more expensive but it has smoother bokeh and very good sharpness from wide open, good flare resistance and nice sunstars. It has some issues with the Sony a7’s thick sensor stack but none the less it delivers a superior performance in about any aspect but the close focusing distance.

This is Minolta’s sharpest 28 mm lens. Stopped down to f/8 is is competitive with expensive native lenses even on today’s 24 MP Sony a7ii. Only the flare resistance is not up to modern standards. At f/2 it is more of a character lens though with very busy bokeh and reduced contrast but good resolution. So it might be a good option for you if you like lenses which show “character” wide open and perform strong stopped down.

If you want a general purpose 28mm lens the Sony FE 2/28 or Voigtlander 2/28 are much more attractive general purpose lenses to me because of their smooth bokeh and high contrast from f/2 as well as a good flare resistance the Minolta doesn’t offer. At least for my landscape photography I prefer to use manual lenses but here high contrast and good flare resistance are important and other lenses like the Pentax K 3.5/28 or Zeiss 2.8/28 perform better than the Minolta in these regards even though they are not sharper.

If you know how to use it the Minolta MD 2/28   can produce excellent results on a modern 24 megapixel camera but at the same time it has quite a few limitations like very busy bokeh and mediocre flare resistance. In light of this performance I find it a bit expensive.

The Minolta MD 28mm 1:2 usually sells for around $200 used at ebay.com or around 200€ at ebay.de (affiliate links). Also check out my Minolta SR-mount adapter guide.
If this review was helpful to you, please consider using one of my affiliate links or sharing the review with others. Thanks ? 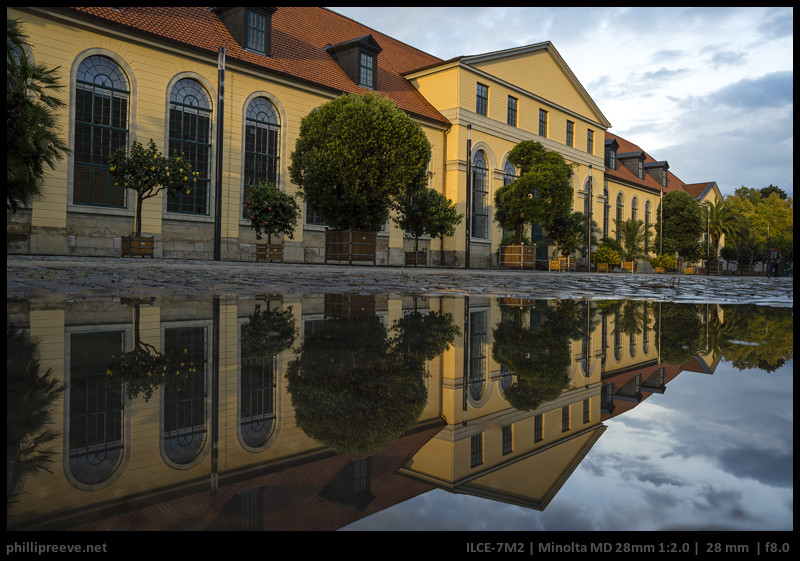 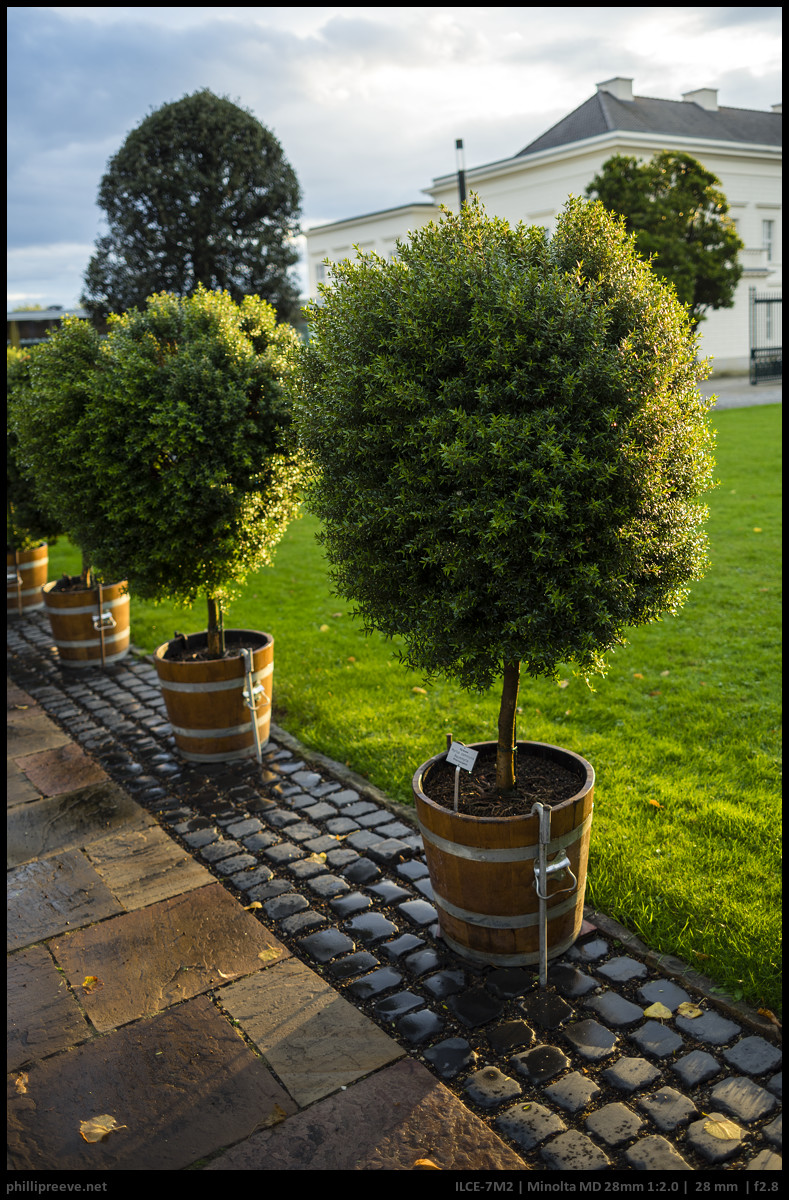 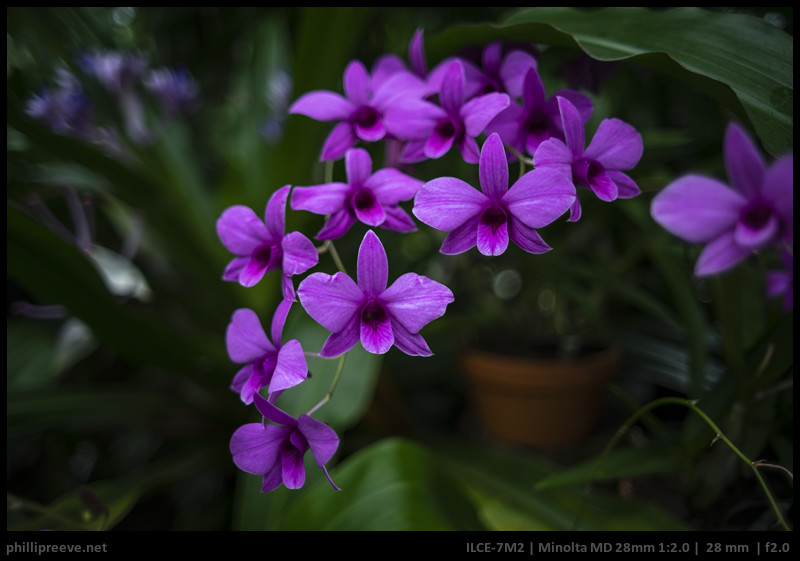 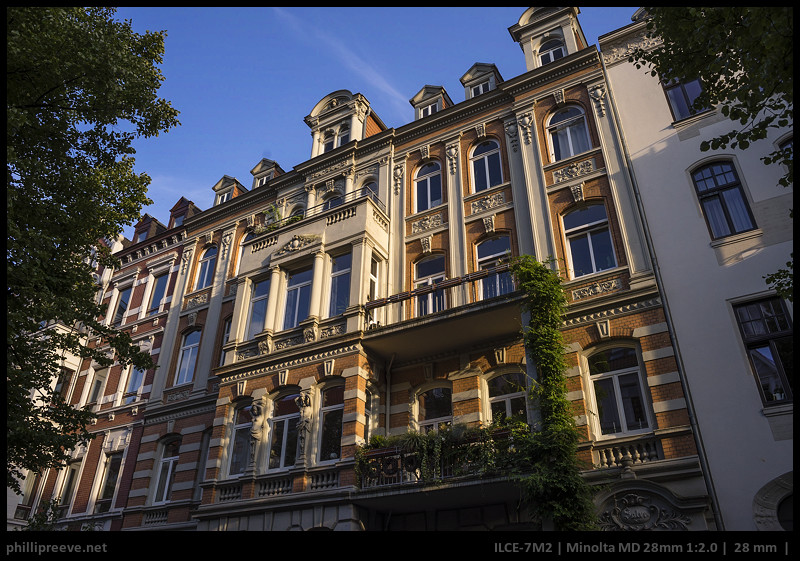 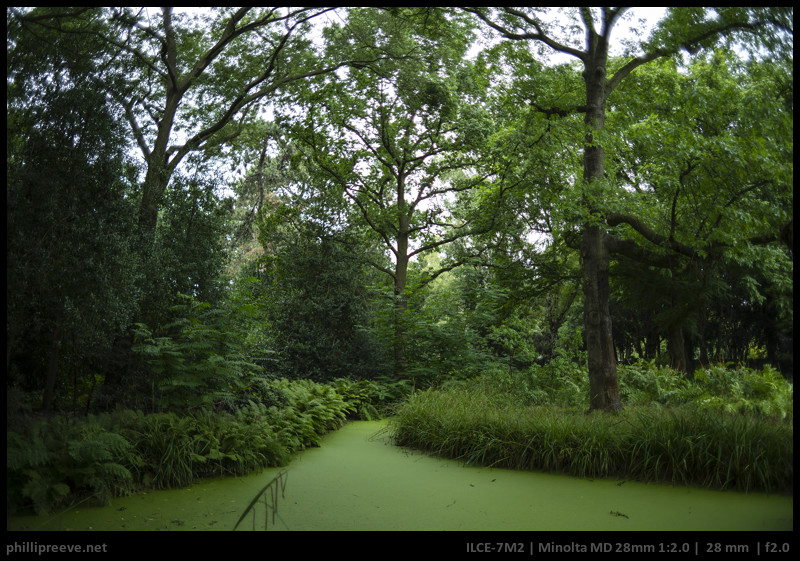 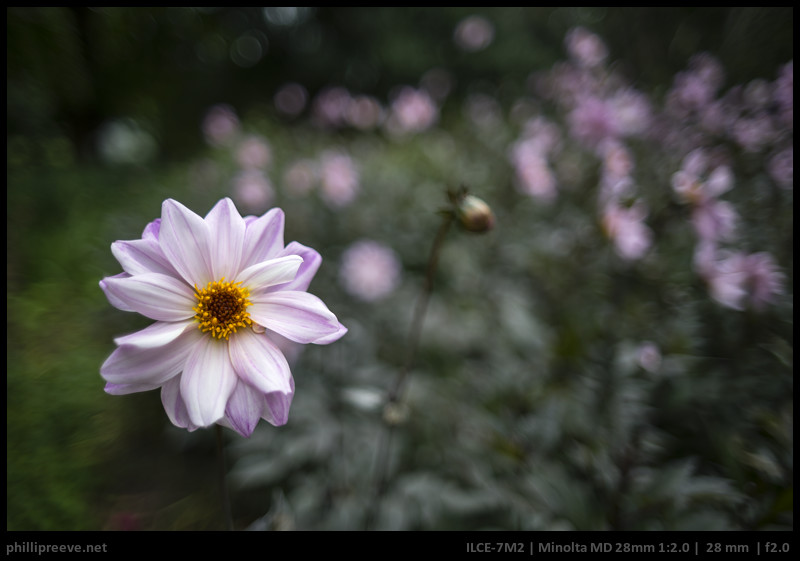 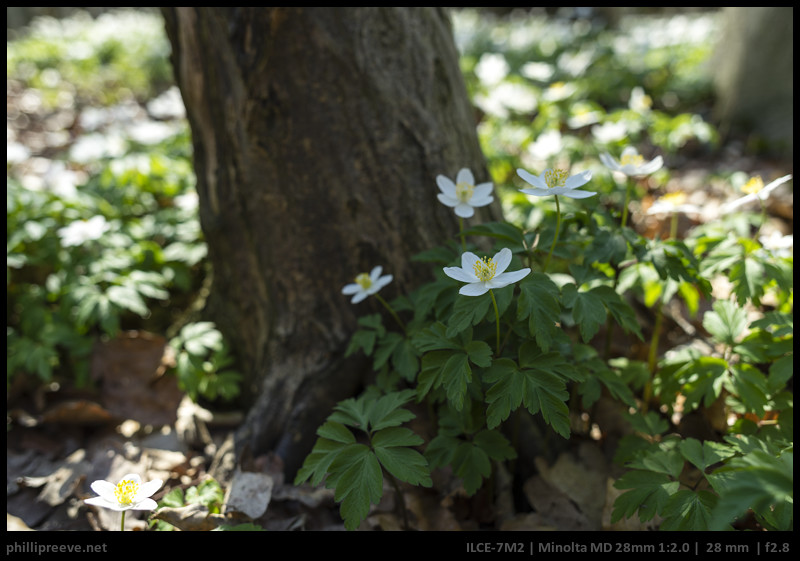 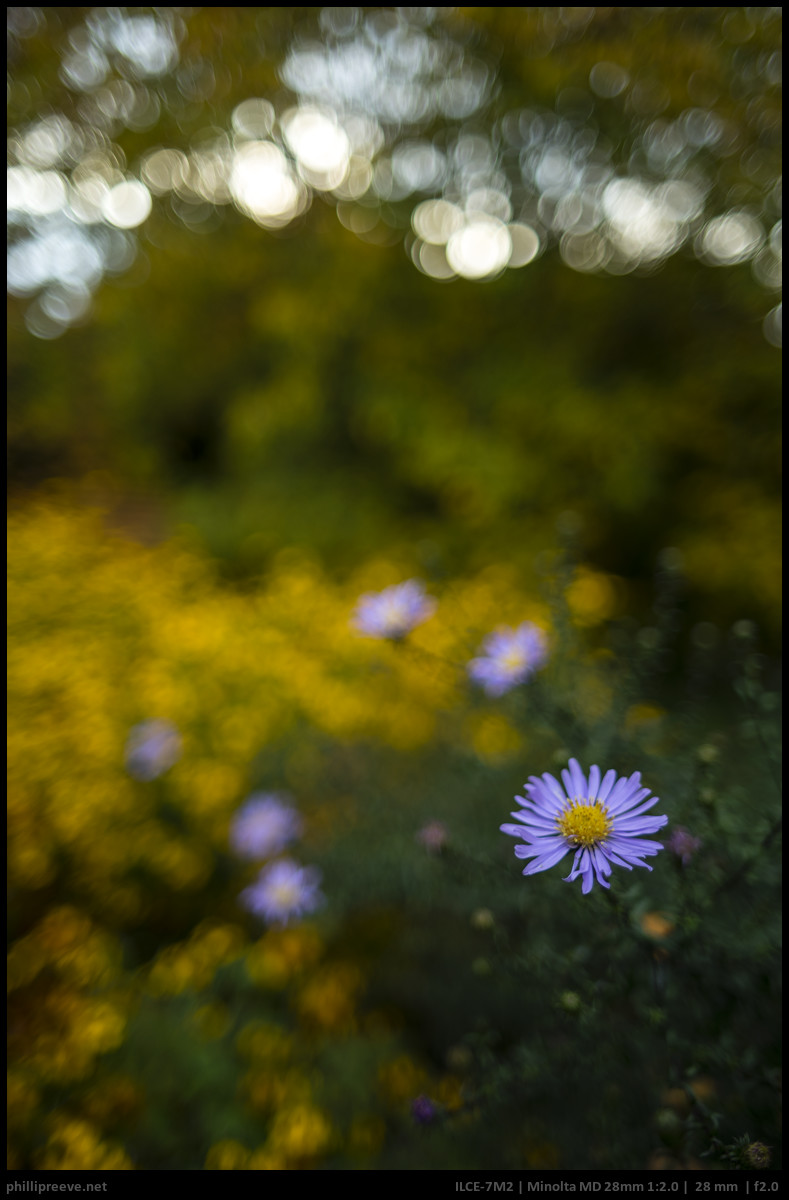