The Minolta MD 35-70mm 1:3.5 is an very affordable, light weight zoom with a very good performance in a limited but handy focal range

Since there is only a small price difference between the second and third version I would recommend to buy the third version because of the handy 1:4 Macro mode. Stay away from the first “Rokkor” version.

By today’s standards the built quality is very good but compared to the best manual lenses it isn’t that good. The Minolta 3.5/35-70 feels a little plasticky.

The barrel and the mount are made from metal and anything else is made from plastics or glass. The zoom ring and the aperture ring feel a little cheap.

The lens is not a push-pull zoom but it has a dedicated zoom-ring.

The focusing ring travels around 10 degrees from 80cm  to 1m and a further 90 degrees to infinity.

The focusing ring is quite smooth, resistance is just right.

The aperture ring is made from plastics and clicks quite nicely.

The lens has 7 straight aperture blades. The original hood is rather small and protects the front element without adding too much size. It is made from plastic, feels solid enough and attaches firmly to the lens.

The 3.5/35-70 is a medium sized lens. It is well balanced when used on the Sony a7, adding a L-bracked improves the balance further.

The filter thread is made from metal and the front element does turn when the lens is focused.

The lens has a very long short focusing distance of 80cm, most 35mm primes are at 30cm and most 50mm lenses at 45cm so they offer a much higher magnification.

But the lens also has a macro mode. You activate a switch and turn the zoom ring behind the 70mm marking and the image is magnified. So at shorter distances you can focus with the zoom ring.

Flare resistance is better than I expected from a 1980’s zoom lens.
There is some contrast loss when a bright light source is in the image but the images remain usable with minor processing, I have seen much worse.
Ghosting is very well controlled.

At  f/3.5 bokeh is a bit distracting because blur circles have a defined brighter edge.

At f/5.6 the blur circles have a much less defined edge but they are now take the shape of the aperture with it’s seven not rounded blades.

I prefer to stop down to f/5.6 because I find the bokeh at f/3.5 too distracting. For images with nicely blurred backgrounds there are fo course nicer lenses.

Lateral chromatic aberrations are moderately well controlled at 35mm, well ontrolled at 50mm and more or less not visible at 70mm.

Axial chromatic aberrations (“bokeh fringing”)  can be visible at f/3.5

At 35mm there is a moderate amount of barrel distortion 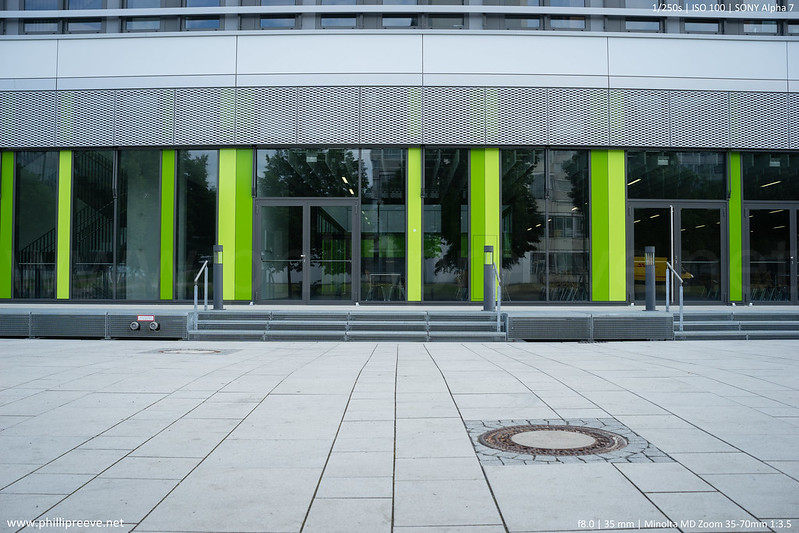 f/3.5: The center and midframe region show very good sharpness and a little reduced contrast, the corners are soft with some coma.

f/5.6: Contrast and sharpness are high across most of the frame now.
While the far corners remains soft right next to it sharpness is quite good actually.

f/8: Some improvement in the corners.

f/11: The center is a little less sharp, only the very last few pixels of the corners are unsharp.

f/3.5:The lens is sharp across the frame with only a little corner softening. Contrast is a bit lower.

f/5.6: Center and midframe region are very sharp, the corners are sharp. Contrast is good.

f/8: The lens is sharp as a prime across the frame.

f/11: The corners improve a tiny bit, the center is a little bit softer.

f/3.5:A little weaker than at 50mm: Contrast is lower and sharpness is okay.

f/5.6: Center and midframe region are very sharp, the corners are sharp. Contrast is good.

f/8: The lens is sharp as a prime across the frame.

f/11: The corners improve a tiny bit, the center is a little bit softer.

The Minolta MD 35-70mm 1:3.5 is a versatile lens, because it performs so well it can replace 2 or 3 primes and make your bag much lighter. The 1:4 macro mode adds to it’s usability as well. You will sacrifice some the ability to blur backgrounds though.

Distortion is noticeable at 35mm but well controlled at 50 and 70mm, CA and Vignetting are present but not too much so.

You need to be aware that at f/3.5 contrast isn’t very high and bokeh a bit rough.It is a good choice when you need a light lens and some flexibility. I like to use it for city walks and short trips into nature.

All in all this is a very good lens which outperforms many much more expensive modern zoom lenses.

If you consider buying one please use one of my affiliate links and support my work: Minolta MD 3.5/35-70 at ebay.de

For more Minolta lenses check out my Minolta list.

To learn about manual lenses in general this beginners guide for a7 users might be helpful.