After I tried the Visionar 109mm 1.6 I became quite interested in this line of projector lenses as they offer quite a lot of glass for the money. The 183mm 1.9 is the second longest and extreme of the line. So if you are interested in the look of a 180mm 2.0 but don’t want to spend more than 500€ be sure to keep reading!

This lens was adapted using stock parts so no non reversible modifications to the lens had to be made. You will find the single components I used in the handling section. With all these components the lens has the following specifications:

The lens itself is a massive piece of metal with 6 big glass elements. No focus ring, no aperture diaphragm.

You can easily adapt the lens by getting the following parts of ebay: Ø80mm to M65 adapter in combination with an M65 helicoid 25-55mm and an M65 to E-mount adapter. I further recommend getting a generic tripod collar for the Nikon AF-S 80-200mm 2.8, you may add a stripe of duct tape for a tight fit (affiliate links).

With a lens this big you will obviously be holding the lens and moving the camera when turning the helicoid. This setup is definetly not for fast action shots because the balacing is somewhat off with the “focus ring” so close to the camera.

This lens covers even more than the full frame area and this is positive influence on the vignetting figures. Vignetting amounts to 1.5 stops, which is a bit less than the Canon 1.8/200 wide open and comparable to the Olympus 2/180.
You get slightly darker corners when focused at infinity, this goes away when focusing on something closer.

What is really impressive with this lens is the low amount of mechanical vignetting. To show how impressive it actually is here is a comparison to the Olympus OM Zuiko 180mm 2.0 Auto-T and the Canon EF 200mm 1.8L USM.
So in the following comparison we move from the center (left) to the extreme corner (right) and see how the shape of the light circle changes.

All lenses were focused at the same distance and I tried to keep the position of the front lens constant. As can be seen this Visionar shows almost no mechanical vignetting and the light circles have almost the same size across the whole frame.
This is quite different from the other lenses, especially the Olympus, which shows quite significant mechanical vignetting.
This does not only mean that the bokeh towards the corners will look pretty nice but also makes the Visionar a great lens for brenizer/bokehpanorama work. 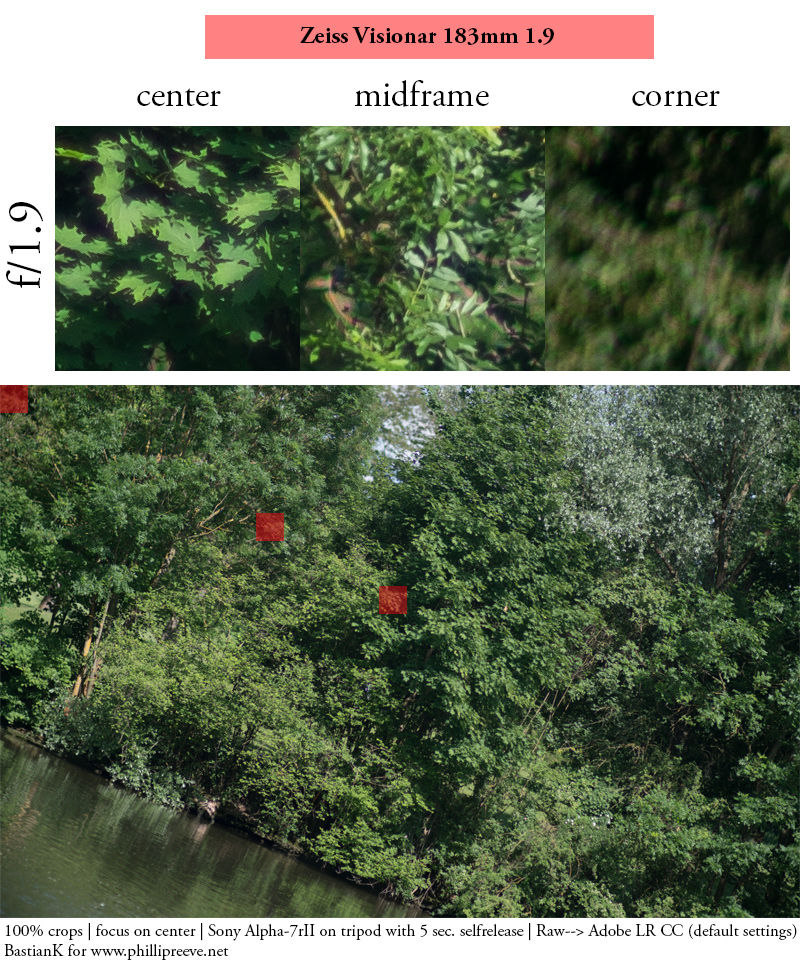 When focused at something close to infinity the lens shows some field curvature. This lens is obviously not the right choice if you want to take stopped down landscape/architecture pictures

The performance at the minimum focus distance in the center is not that bad but this is one of the lenses where the focal plane with least color fringing is not the one with best sharpness. I found it quite usable for most close up scenarios, but have a look at my sample images to decide for yourself.

Apart from the lack of helicoid and aperture diaphragm the flare resistance is the biggest drawback to these projector lenses. Without strong light sources in the frame – or close to it – contrast isn’t bad at all, but if there is stray light hitting the lens contrast is significantly reduced.
In the following comparison the sun was close to the frame in the first shot, which led to a significant loss in contrast. For the second shot I moved a bit to the side which gave better results, but some veiling flare remains. Processing is exactly the same for both shots.

So you really have to watch out for stray light and also shooting directly into the sun with this lens is a bad idea, unlike you like this low contrast look:

Performance is not as good as we have seen with the Visionar 1.9/168. But for the main applications for this lens (shallow DoF photography and portraits) this will rarely be a problem.

The bokeh rendering is obviously the reason to get this lens and I don’t know of any other lens where you get so much bokeh per dollar spent.
Compared to the Visionar 1.9/168 this lens is more noticeably overcorrected for spherical aberrations which makes the bokeh a bit harsher with more noticeable outlining.
Obviously what kind of rendering you prefer is a matter of personal taste, so have a look at the sample images.
Also (as we have already seen with the Visionar 1.6/109) the focusing distance plays a very important role:

At head and shoulder potrait distance the background is rendered super smooth.
For half body it is still very nice and just a tad less smooth.
Taking shots from farther away (full body with a few surroundings) and bokeh gets much more nervous with distinct outlining.

So if you focus on something close the background will just melt away:

Focus on something farther away and the harsher bokeh with double edged structures becomes quite obvious:

Still, with the Visionar 183mm 1.9 you can get subject separation only equalled by lenses costing 10 times as much.

Because of the well behaved mechanical vignetting this is also a great lens for brenizer/bokehpanorama work:

With this lens you almost always have a combination of lateral and longitudinal CA so even with the auto correction there will still be color fringes left. This is will hardly be field relevant with this lens though.

In close up scenarios the longitudinal CA are already visible, yet not overly bothersome. But if you focus at something farther away in more demanding scenes you can definetly spot quite a lot of purple fringing, comparable to most legacy 85mm 1.4 lenses: 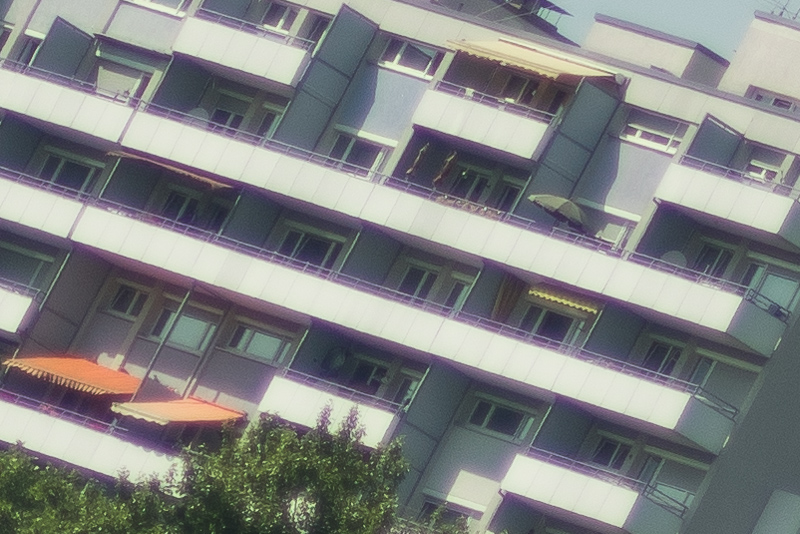 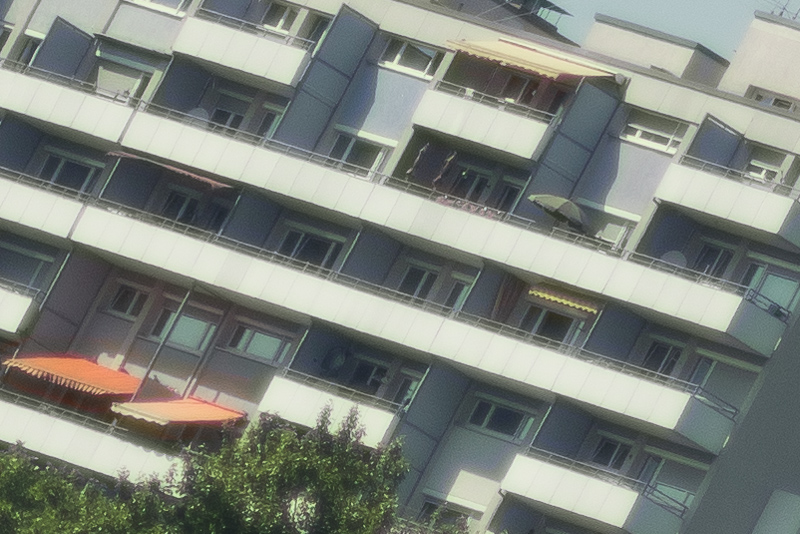 In this case it was possible to correct the purple fringing with the help of Lightroom, but this won’t always be a lossless process.

There are not many lenses with comparable specifications:

Olympus OM Zuiko 180mm 2.0 Auto-T:
This is the closest in terms of specs. It has better sharpness at all distances due to a floating elements design, better flare resistance and is significantly lighter. It also shows worse mechanical vignetting figures and costs at least 10 times as much.

Many of the things I have written about the Visionar 1.9/168 apply here as well:

With these parameters there is barely any competition short of a few very expensive (D)SLR lenses. Compared to these there are a few obvious disadvantages: The lack of an aperture diaphragm means this lens will only be suited for portraiture and shallow depth of field photography and not really for landscape and architecture. Furthermore flare resistance is really quite bad, so you always have to watch out for any light hitting the front element.

But if you can work around these flaws the lens can give great results. I often found the bokeh to be very pleasing, but you shouldn’t be too far away from your model to avoid outlining in the background bokeh, the 1.9/168 is slightly better behaved in this regard.

If you already liked the look of the super fast tele lenses like the Olympus 2/180 or the Nikon/Canon 2/200 – but so far you couldn’t or didn’t want to afford these – you should consider giving these longer Visionar lenses a serious look. As with these you can get similar bokeh rendering for very little money.