I have already been talking about editing pictures with the help of profiles in the past in the articles How I edit my pictures and Emulating Filmlook. This time I will have a look at the Cobalt Image profiles.

I was approached by Cobalt Image to have a look at their portfolio and afterwards they provided me with the Basic Profiles for my three cameras as well as their Kodak Film, Leica Monochrom CCD and Leica M Digital emulations packs.

The basic profiles are camera specific and serve two purposes:

The latter generally does work very well – when using the same lens on these cameras. And usually additional white balance adjustments need to be made as well.

To be honest with you: in many scenarios I didn’t see a notable difference between the Adobe Standard and the Cobalt camera specific profiles.

With rather complicated lighting situations I did notice some clear benefits using the Cobalt profiles though, as they bring out better color detail in the highlights. With neon signs I found this especially noticeable, but I guess when taking pictures of colorful flowers under the sun it will also be visible.

In a way the look of these neon highlights when using the Cobalt profiles reminds me a lot of what I am getting out of the Silbersalz 35 color negative films.

With professional digital photography a mostly “neutral” or “true-to-life” (whatever that may mean) color rendition was and still is what many camera manufacturers aim for – at least with their standard picture profiles. Still, emulating the look of film has been a big topic for a long time. Fuji is still using its film heritage with great success, offering such film emulations mimicing Fuji film stock (even discontinued ones) directly in camera.

But even if you are not using a Fuji camera there are plenty of options, if you use Lightroom you can find presets and profiles helping you to emulate pretty much every film stock that ever existed (also have a look at my article Emulating FIlmlook for further reference). The quality of these presets varies greatly though.

So now I have Kodak Gold 200 presets from three different suppliers. But all are meant to emulate Kodak Gold 200, so the results will look roughly the same, right? Not at all, as you can see from this comparison:

There are several issues here. How you develope and scan the film can already alter what the results look like. Film and digital react differently to varying light sources. Color negative film has a high latitude in the highlights, digital in the shadows.

There are also presets that are designed to give you a punchy look “out of the box” whereas there are others that only alter the colors and look very “flat” at first sight, With the latter it is expected of you to make changes to the tonal curve as well as contrast and clarity yourself to get the look you desire. So it is also important to find the profiles that fit your workflow best.

For every film included, the Cobalt package contains 4 different profiles, the Standard and sRGB always look the same to me, probably because I work in the sRGB space anyway:

Again the question is: how do these compare to a picture taken with an actual roll of Portra 160? Out of the 4 Cobalt profiles the standard one looked closest to me, but I still had to make some white balance, contrast as well as lights/shadows adjustments to come close to the film scan, the blue parts are still lacking the strong green hue though:

Where does this leave us? First and foremost I think there are too many variables involved that are making it impossible to create “one-click-profiles” that give you results indistinguishable from pictures taken with the actual film under any kind of circumstances.

I am pretty sure all the suppliers of such profiles have a scan of a color negative where their profile gives a near perfect match, but as soon as you change the developer, scanner or lighting situation it will most likely not be the case anymore.

For me personally, it worked best to edit the pictures like I usually do and then choosing one of the Cobalt Standard profiles at the end of the editing process to change the color palette.

I have never used a Monochrom CCD Leica, so I cannot show you any direct comparisons to pictures taken with one here. 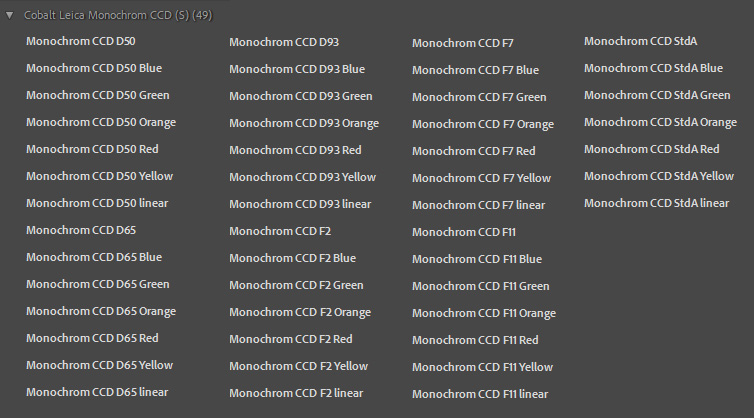 The Monochrom CCD package contains a plethora of profiles (49 to be exact), even ones taking into account color filters.

Now personally, I see such profiles only as a starting point of the editing process, so I surely wouldn’t have needed 49 – often only slightly – different ones.
I know how to alter the brightness of different colors in post and I never shot black and white film using color filters myself, so a “green” or “blue” filter doesn’t mean anything to me.

But for you the situation might be different and when you look at the scene and think “I definitely need an orange filter here!” the availabilty of a host of profiles might be exactly what you are looking for. 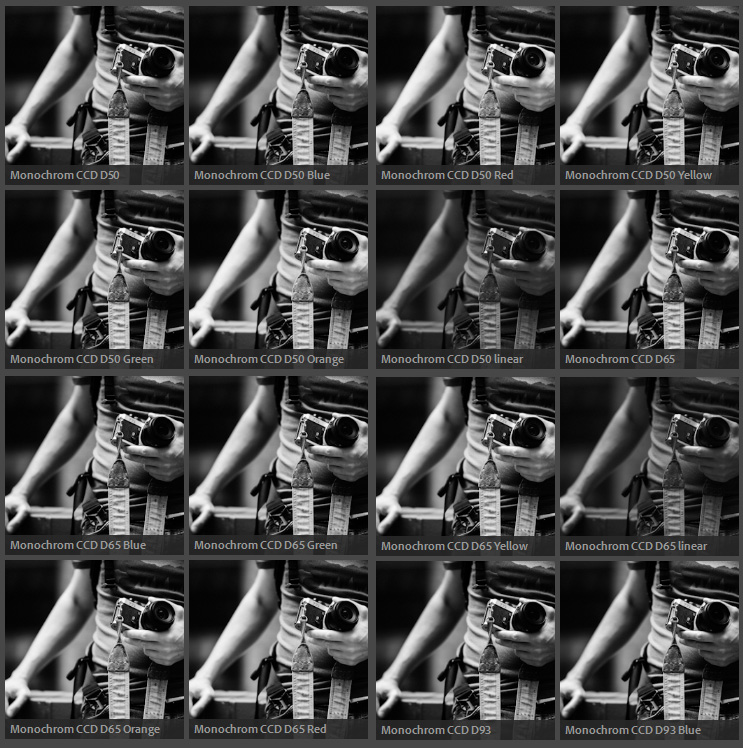 With so many different profiles I guess the likelihood that there will be one for a given picture that you like is high, but scrolling through that many can also be a rather tedious process.

Already in the past I have said I don’t think the color science of Leica cameras is any better than that of Nikon, Sony or Canon cameras. There are still differences and even though they hardly matter to me, they may be very important to you, and this is what this Leica M Digital emulation pack is for. 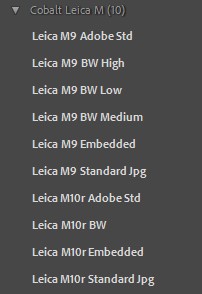 This pack enables you to give your pictures the Leica M9 and Leica M10r color signature regardless of what camera they have been taken with – as long as you also bought the Cobalt Basic Profile for the camera you are using.

I shot with Nikon DSLRs in the past, I currently use Sony and Leica mirrorless cameras. Not even once did I have the feeling that the colors of one are significantly better or worse than those of another. If I am not happy with the skin tones I adjust the white balance and/or the orange hue/saturation/luminance. If I am not happy with what the sky looks like, I do the same with the blue hue/saturation/luminance sliders.

But this is just me and I know plenty of people are looking for that “Canon”, “Fuji” or “Leica” look and are using a different brand camera. If you are one of those, the Cobalt Image digital emulation packs might be exactly what you are looking for.

When editing my pictures I usually know what look I want for a given picture – and how to get there – and very often I use a preset I like as starting point. To be honest: I don’t really care about subtle color differences. Most of my pictures are being viewed on all kinds of screens having different calibration, brightness, gamma, tonal range and so on. The differences between these various viewing devices are often significantly bigger than those between different profiles, so one could argue I am not really the target audience for the Basic Profiles.
If you are a product or fashion photographer your view on this may be vastly different though.

Nevertheless, where the difference isn’t subtle is with bright artificial light sources in the frame, especially red ones. These days, whenever I have a picture like that, I first check if those highlights have more/better color information and are closer to what the scene looked like to me, when using the Cobalt profiles.

Due to the short supply of film these days, the only films where I could compare actual analogue pictures to the profiles included in the Kodak film emulation pack are Gold 200 and Portra 160 (yet). The profiles are not a bad starting point to get a look close to those films, but there is definitely some additional post processing work to be done after applying them – at least when comparing those files to the scans I receive from my films.

With the digital emulation packs the situation is similar and at the end of the day – and this might not be what you want to hear – I think you have to try for yourself, which profiles and presets work best for your workflow. And also if you are chasing after an exact replication of something, or just a look you like.