While Cosina has updated the Voigtlander 15mm 4.5 to a 3rd generation (which even comes as native E-mount lens), the second version still cannot be beaten in terms of size.
Is this lens still a good choice on a digital camera or should you stick to the bigger and more expensive Mk. III version?
Lens is being tested on 42mp Sony A7rII and 24mp Leica M10

So far there have been 4 different versions of this lens:

With the MK III the optical design has been updated to account for digital sensors with a filter stack in front of the sensor, unfortunately this also had influence on the size of the lens, which increased noticeably. Therefore, after I have already reviewed the MK III version in E-mount, I now have a look at the MK II version which has the following specifications:

This lens has been discontinued with the arrival of MK III and therefore can only be found used e.g. on ebay.com/ebay.de for about $400 (affiliate links)

The Voigtlander VM 15mm 4.5 SWH II is a really tiny lens. It only consists of focus ring (with focus tab), aperture ring and the built in lens hood. The lens looks and feels like it is an all metal construction, all the markings are engravend and filled with paint and there even is a red dot to be found like on the Leica lenses.
The focus ring has perfect resistance and travels exactly 90° from the minimum focus distance (0.5 m) to infinity.
The aperture ring has equidistant half-a-stop click stops and travels ~80° from f/4.5 to f/22.

Unlike on the previous M39 version there is also a rangefinder coupling, but keep in mind that you will need an external finder to make proper use of this on a Leica rangefinder camera.

I only wish the lens hood was removable, as it would make the lens even smaller and would further allow the usage of a small filter system. Therefore I had the hood cut off by 360pano.de who did a great job at this.

Because of the non removable hood we cannot get decent values on light fall off with our usual method. As we have seen in the past with these small wide lenses there also isn’t much improvement on stopping down.
Wide open you get roughly 3.8 EV light falloff in the corners of the A7rII sensor.
On the M10 the light fall off is not symmetrical, on the left side of the frame we have 3.0 EV light falloff while on the right side we have 3.5 EV.
Also have a look at the following comparison to get a better understanding of the differences between these two sensor designs and the asymmetrical M10 output.

Sensor design makes a big difference here. On the A7rII we have a bit of a green color cast in all the 4 corners, which is what we have often seen in the past with other wide lenses as well.
On the M10 the situation is very different: the left side of the frame shows no noticeable color cast while the right side of the frame shows strong magenta color cast and also 0.8 EV higher vignetting figures.
You can correct this e.g. using corner fix or gradients in Lightroom (latter is what I did for many pictures in this review). Also have a look at the Distortion section where I show an image with/without color cast corrections. 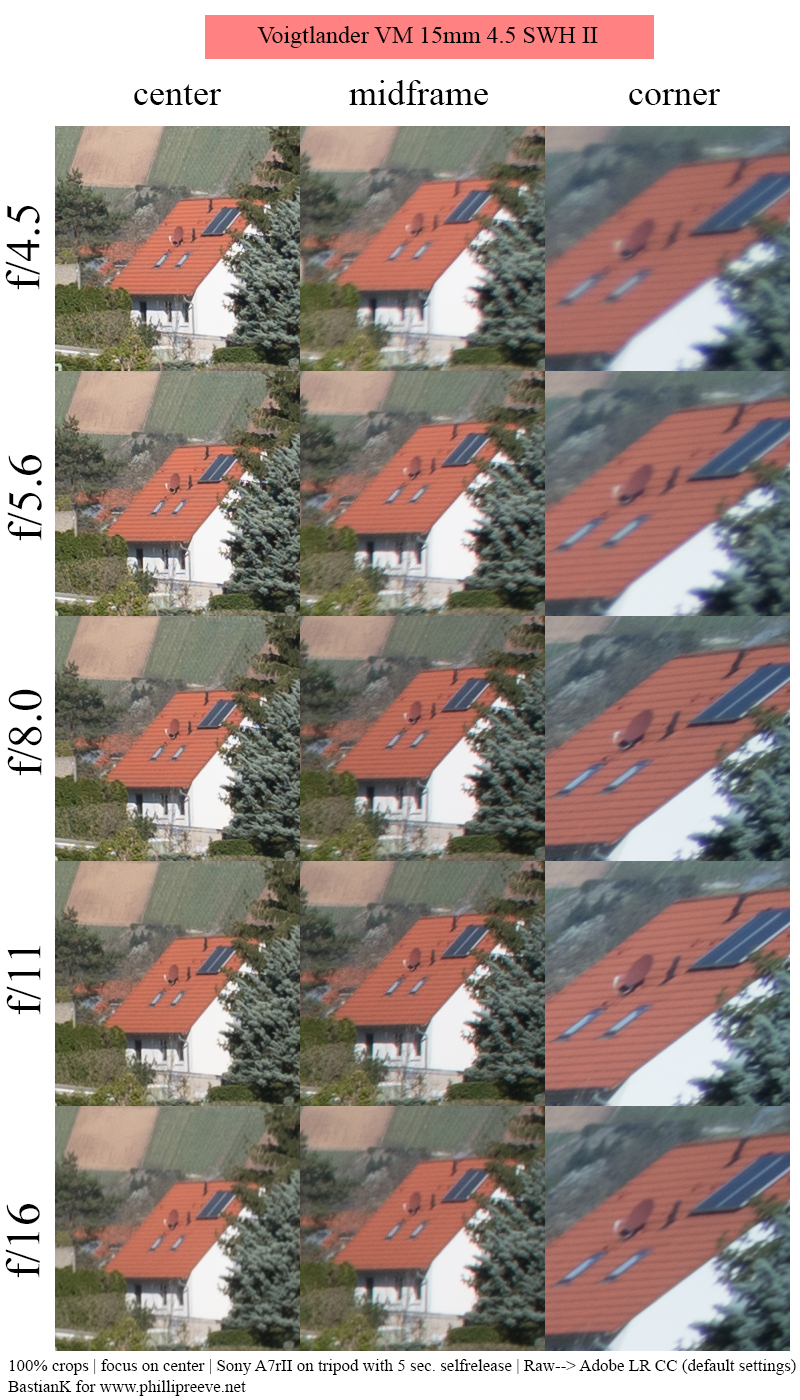 The Voigtlander VM 15mm 4.5 SWH II clearly suffers from the Sony’s thick filter stack as it shows a high amount of field curvature.
While the center shows high resolution and contrast already at the maximum aperture the midframe needs f/8.0 to f/11 to catch up.
The corners never look amazing when you focus on the center and also have their sweet spot around f/8.0 to f/11 then.
You can get slightly better corners at f/4.5 when you focus on them at the cost of center performance, have a look at the Coma section.

Let us see in the next section how the lens performs on a camera with a thinner filter stack. 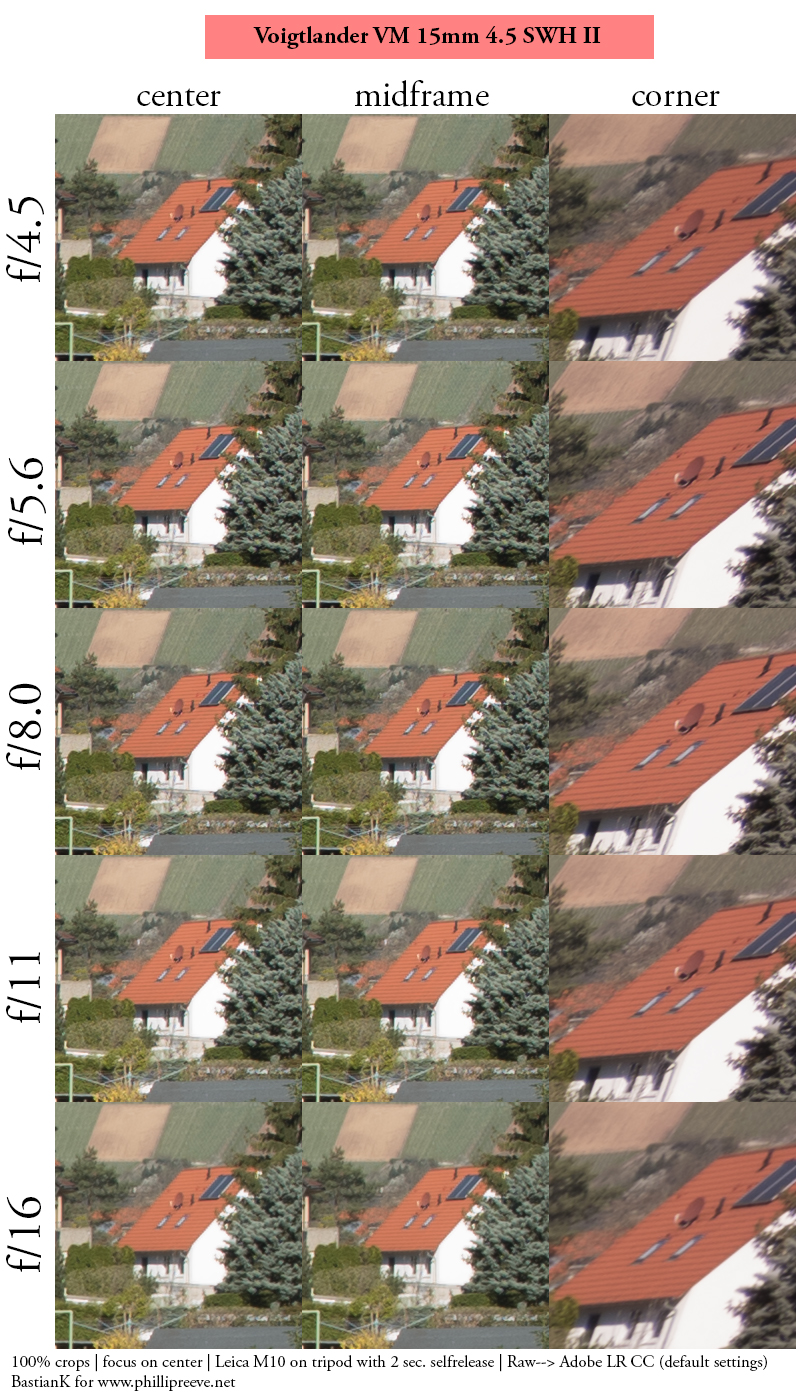 Performance on the Leica M10 with its thinner filter stack is significantly better despite a lower resolution sensor.
The midframe shows a very similar performance to the center and the corners look better at f/4.5 than they ever do on the Sony camera.
Corners don’t show as good a performance as some of the bigger highly corrected ultra wide angle lenses available today (see alternatives section) but for most applications they will be more than sufficient.
Peak performance across frame is reached around f/8.0, but it is not that big a difference compared to wider apertures, so if the circumstances demand it, I wouldn’t hesitate using the lens at maximum aperture on the Leica camera.

A minimum focus distance of 0.5 m is all but amazing for a 15mm lens. Performance is good in the center, but all the 15mm lenses I have tried so far – except for the Laowa 15mm 4.0 macro – show significant field curvature at close distances.

As always evaluating flare is a complex matter since you can get any lens to look bad if you push it hard enough and a slight change of scenario can affect results a lot.

The Voigtlander VM 15mm 4.5 SWH II compares favorably to many ultra wide angle lenses with bulbous front elements, yet some of the latest lenses show a better performance.

The contrast stays on a reasonably high level with the sun in or close to the frame, but ghosts can be quite big and noticeable. This is the worst result I managed to produce:

In many of the sample pictures at the beginning and end of this review the sun is in the frame with no problems at all, but if you have lots of dark parts in your frame it is likely you will also find a more or less obstrusive ghost somewhere if you look close enough:

The parameters do not necessarily make the Voigtlander VM 15mm 4.5 SWH II an obvious choice for astro photography in the first place.
Coma performance is okay, best stop down a bit when you are shooting cityscapes.

The lens shows only minor yet slightly wavy distortion. There is a profile in Lightroom to correct this which does a reasonably good job.
I also added a shot where I used gradients to correct for the green color cast and the light falloff.

The Voigtlander VM 15mm 4.5 SWH II already uses the 10 blade aperture diaphragm that leads to well defined pointed sunstars from f/5.6 to f/16. If you want to learn more about this topic have a look at this article.

Bokeh is not really a strength of this lens. I had to use a close focus adapter to be able to focus close enough to show you some of that busy bokeh.
If you really want a 15mm macro lens have a look at this one.

Not too uncommon for ultra wide angle lenses the Voigtlander VM 15mm 4.5 SWH II shows a noticeable amount of lateral CA. These are still easily corrected either in camera (for Jpegs) or in a raw developer like Lightroom by one click.

As this is a very wide and rather slow lens longitudinal CA (loCA) are nothing to worry about.

If you are looking at a review of the smallest 15mm ultra wide angle lens and you got this far I doubt the comparably huge AF zooms are an alternative to you, but you can still have a look at our Guide to Ultra Wide Angle Lenses for the A7 Series to learn more about these options.

Voigtlander 15mm 4.5 SWH (M39):
If you don’t care about the 52mm filter thread or the rangefinder coupling you can get the same optical qualities for a little less money in the form of the Mk I version.
buy from ebay.com | ebay.de (affiliate links) for $300 (used)

Voigtlander 15mm 4.5 SWH III:
The most obvious alternative is the newer Mk III version. You gain better corner performance and EXIF data on the Sony cameras, less color cast issues on the Leica cameras and maybe slightly better flare resistance.
If you don’t mind the bigger size this is cearly the better choice to be used with a digital camera.
buy from CameraQuest | amazon.com | amazon.de | B&H | ebay.com | ebay.de (affiliate links) for $799

Laowa 15mm 2.0 Zero-D FE:
If you want a significantly faster lens that also works for astro photography and focuses much closer while still staying compact you should be having a look at this one.
buy from manufacturer’s online shop | amazon.com | B&H | amazon.de (affiliate links) for $849

Samyang 14mm 2.8 MF:
Faster, better corner performance, a bit cheaper, worse build quality, better coma correction, worse flare resistance, hilarious distortion, way bigger and no filter thread. There are also sample variation issues with this lens, I have had six of these lenses mounted to my camera, and four of them were badly decentered (3 of them new from store).
buy from ebay.com

Laowa 10-18mm 4.5-5.6 C-Dreamer FE:
If you value flexibility and compact size over image quality and you don’t know yet what focal length is the right one for you this may be worth a look.
buy from manfucaturer’s homepage | amazon.com | B&H (affiliate links) for $849

As a Sony user
While the Voigtlander VM 15mm 4.5 SWH II itself is very small the M-to-E-adapter almost doubles its size. Therefore the lens does not look and feel as tiny on the Sony cameras and I would personally prefer the slightly bigger MK III version here, which is clearly a better performer and nicer to use on a Sony.

As a Leica user:

The thinner filter stack of the Leica M10 really makes this lens shine. While there are still color cast issues, the corner sharpness is significantly better and the lens is certainly usable at the maximum aperture across the whole frame.
It is actually so good, I see little reason to go for the bigger and more expensive MK III version, unless you don’t want to bother with correcting the color cast in post processing.

Unfortunately the lens hood is not detachable, so I had to send it in to have it professionally removed. This turns the Voigtlander into a real pancake lens and makes using filters much easier (and actually possible, when it comes to square filters).

This lens has been discontinued with the arrival of MK III and therefore can only be found used e.g. on ebay.com/ebay.de for about $400 (affiliate links)