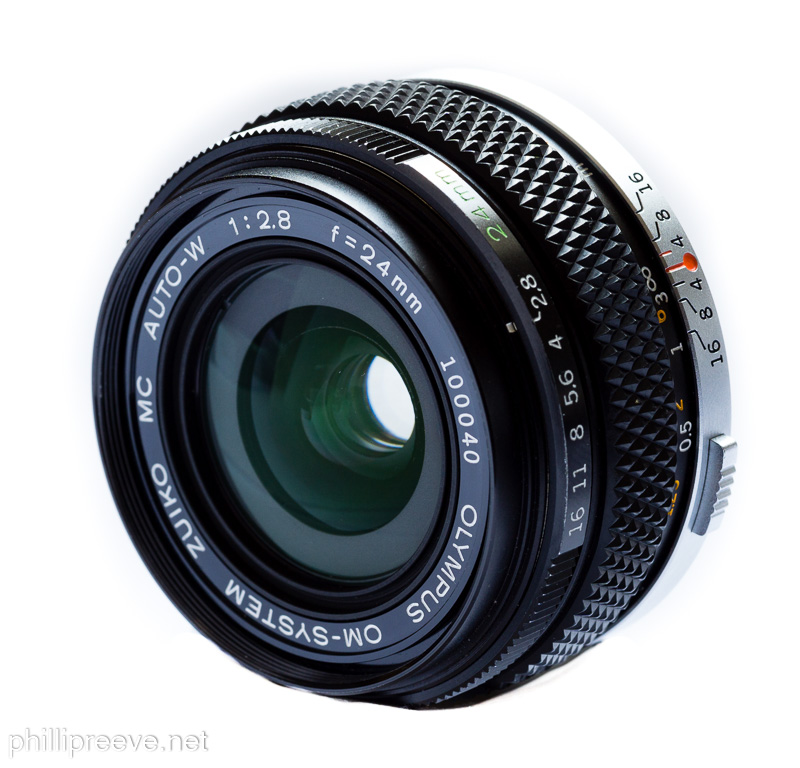 The Olympus OM Zuiko 2.8/24 is the smallest SLR 24mm you can buy. How much performance can such a small lens deliver on the 24 MP Sony a7ii? Read the review if you want to know.

You can find most of the images in this review in full resolution in this Olympus OM 1:2.8 24mm flickr set. 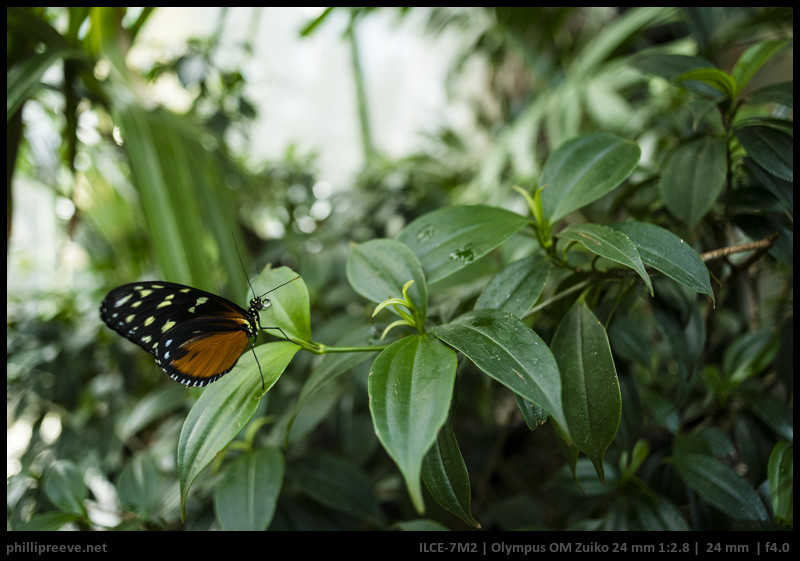 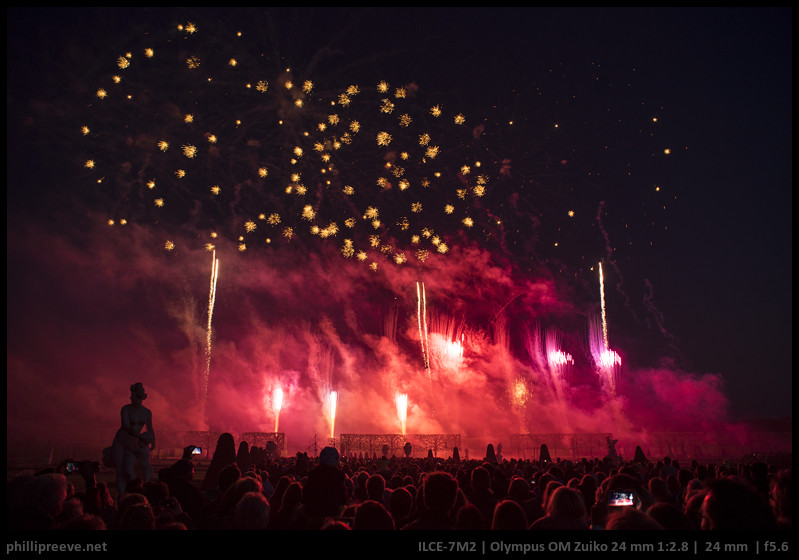 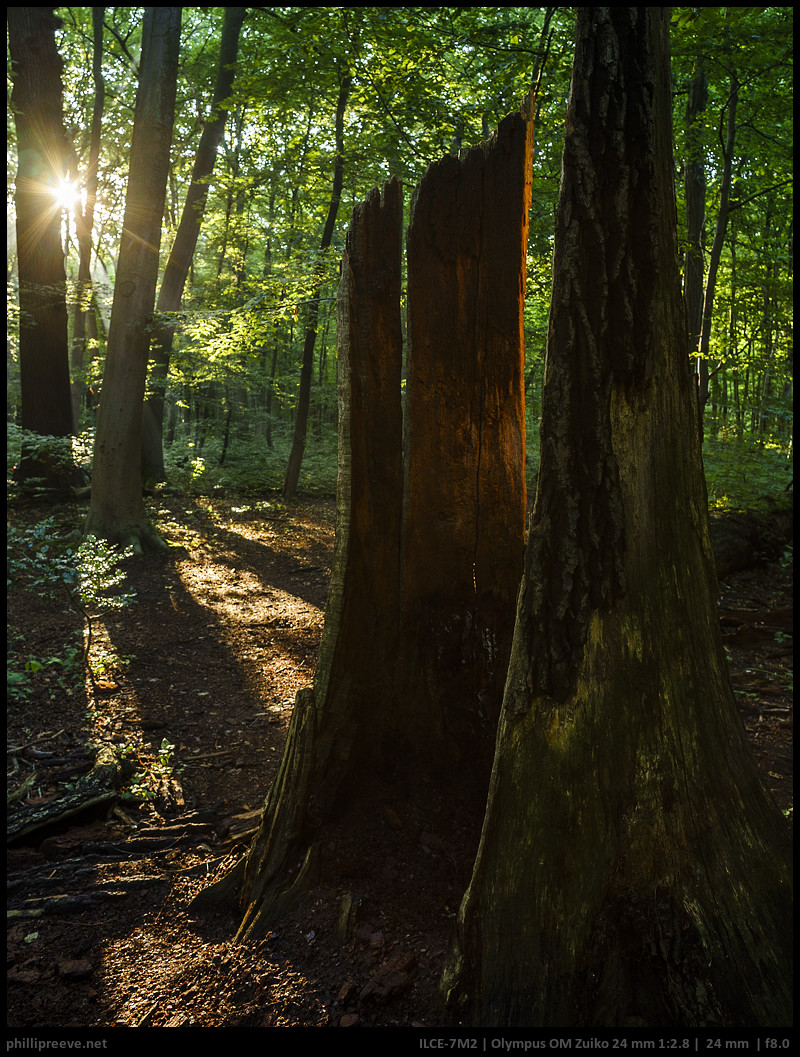 For practical purposes I see three versions of the Olympus OM 2.8/24:

All three versions share the same optics but I would recommend to stay away from the first version (no MC in the name, H.Zuiko and f=24mm) because my experience with single coated Olympus OM lenses is that they flare a lot. I see no practical difference between versions two and three. 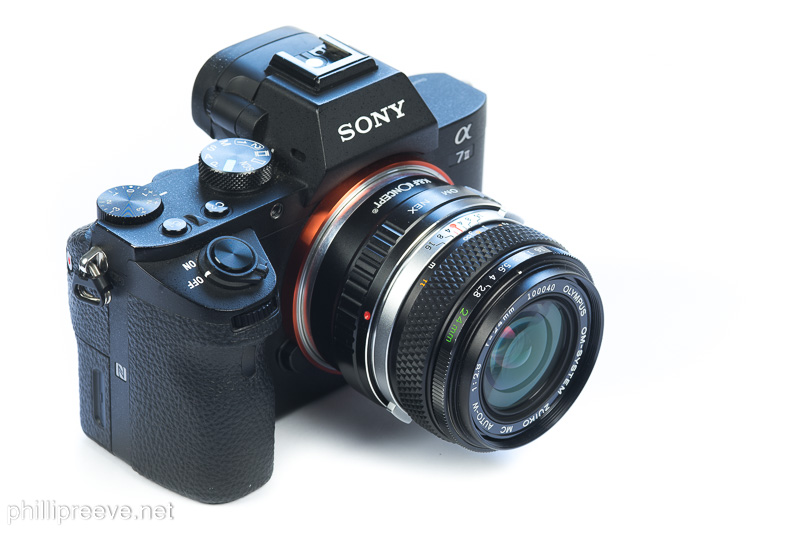 The focusing ring travels around 65 degrees from 0.25 m to 1 m and a further 15 degrees to infinity. This is a little steep for a wide angle but not much of an issue.

The rubberized focusing ring offers good grip and a pleasant diameter. The resistance is pleasant and a little on the low side on my copy. My copy has had a CLA recently so I don’t know if other copies will have a similar resistance.

The aperture ring sits at the front of the lens and it has full stops from f/2.8 to f/16 which click into place very nicely. I think this is one of the best aperture ring designs I have come across.

I don’t own a hood for it but it would make sense to get one since the front lens is quite exposed and flare an issue.

At 180g and with a length of just 31 mm the Olympus is very small but still large enough to be very pleasant to handle and very well balanced on the a7 series. 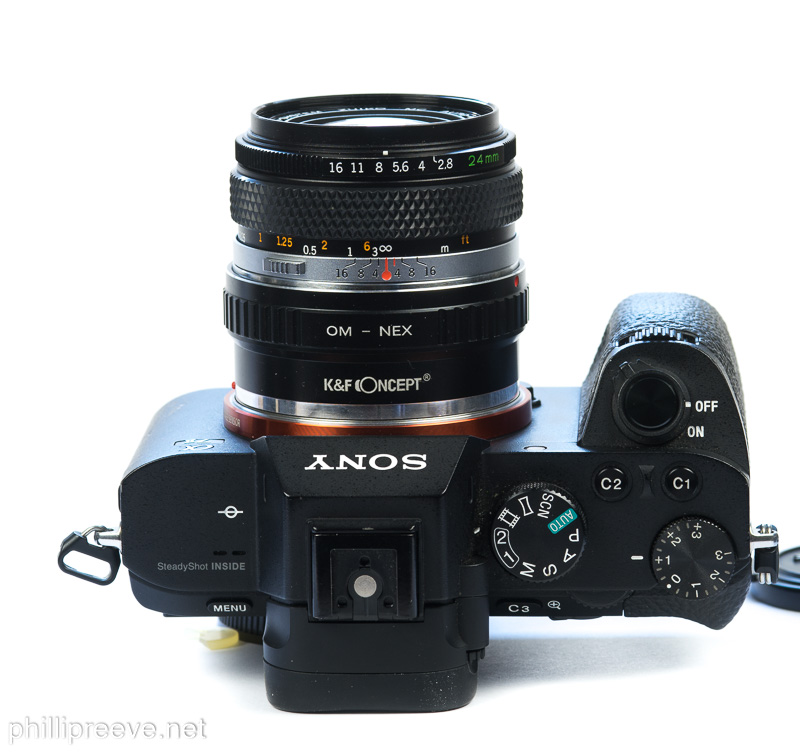 Flare is definitely an issue with this lens. If you have a stronger light source in the image you get a very big ghost and veiling flare in a large area of the image. For me this is a limiting factor since I like to shoot backlit scenes. 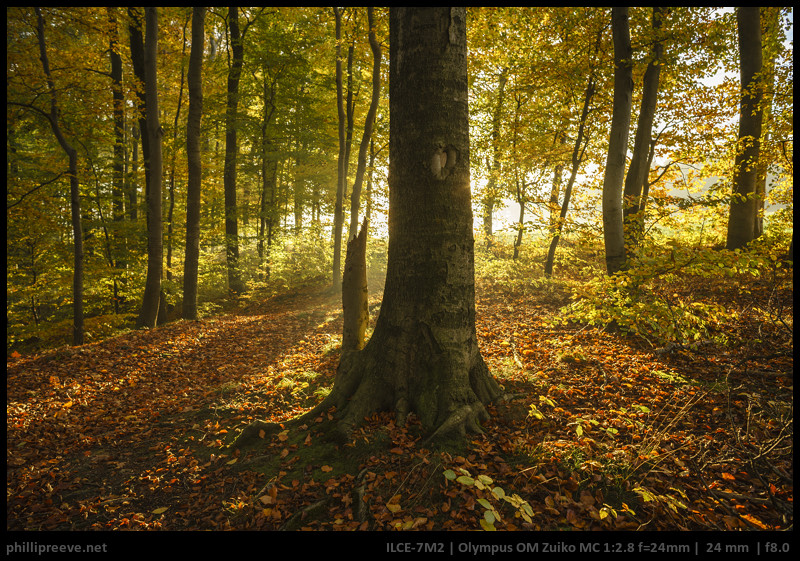 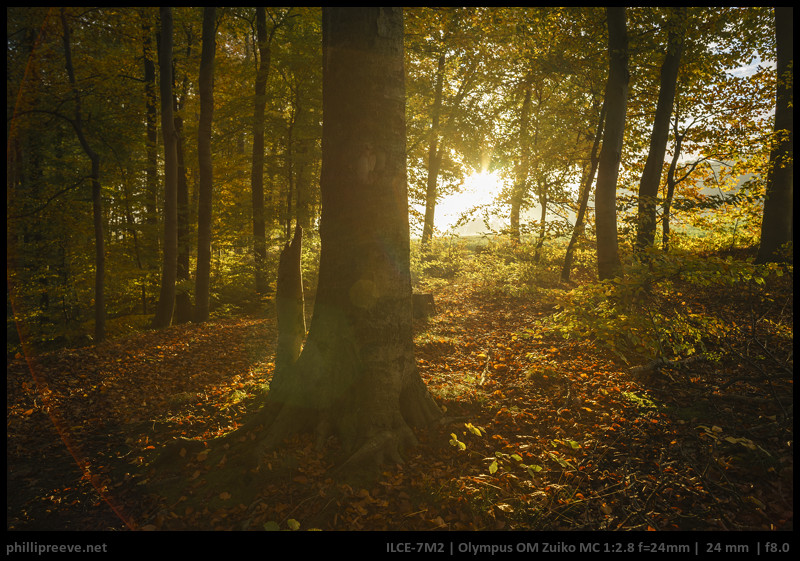 I lifted the shadows in the image above, if you don’t lift them the flare issues aren’t very noticeable.

Without the hood I sometimes got strange red ghost in the corners. These could be eliminated by shading the front of the lens with my hand but I haven’t noticed such a behavior in any other lens before. 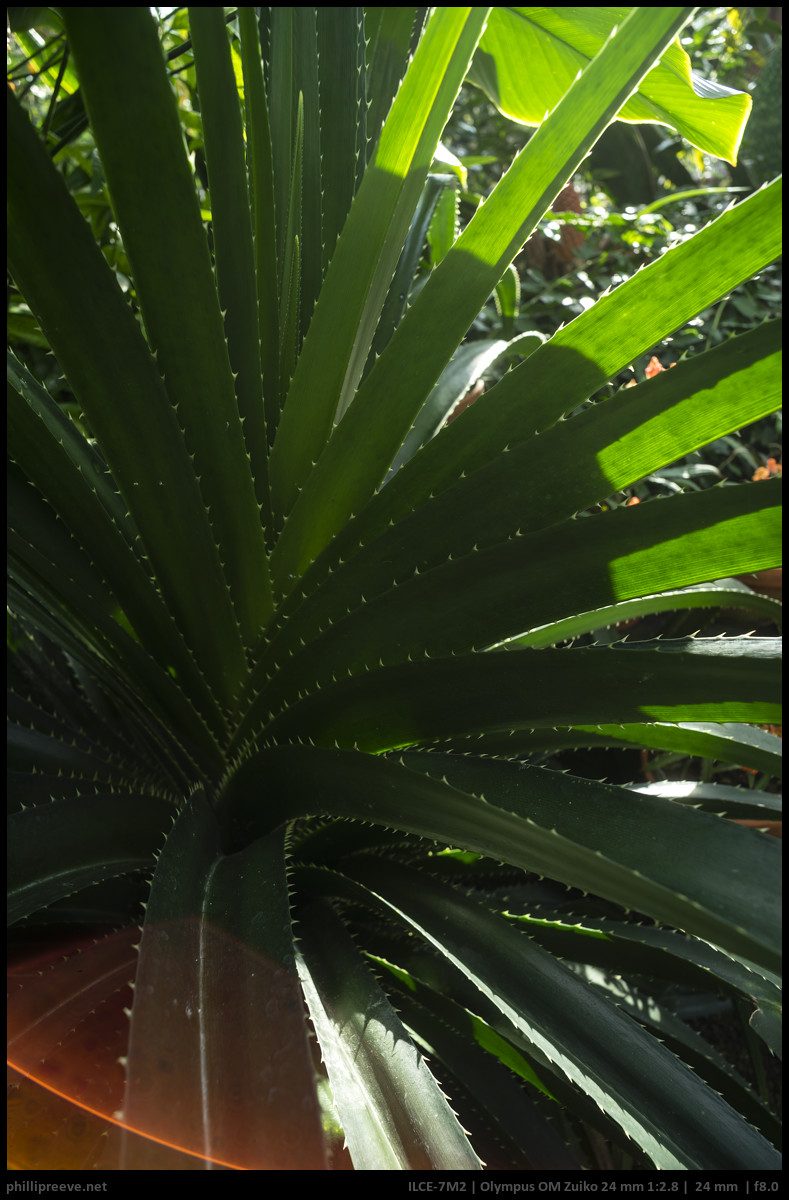 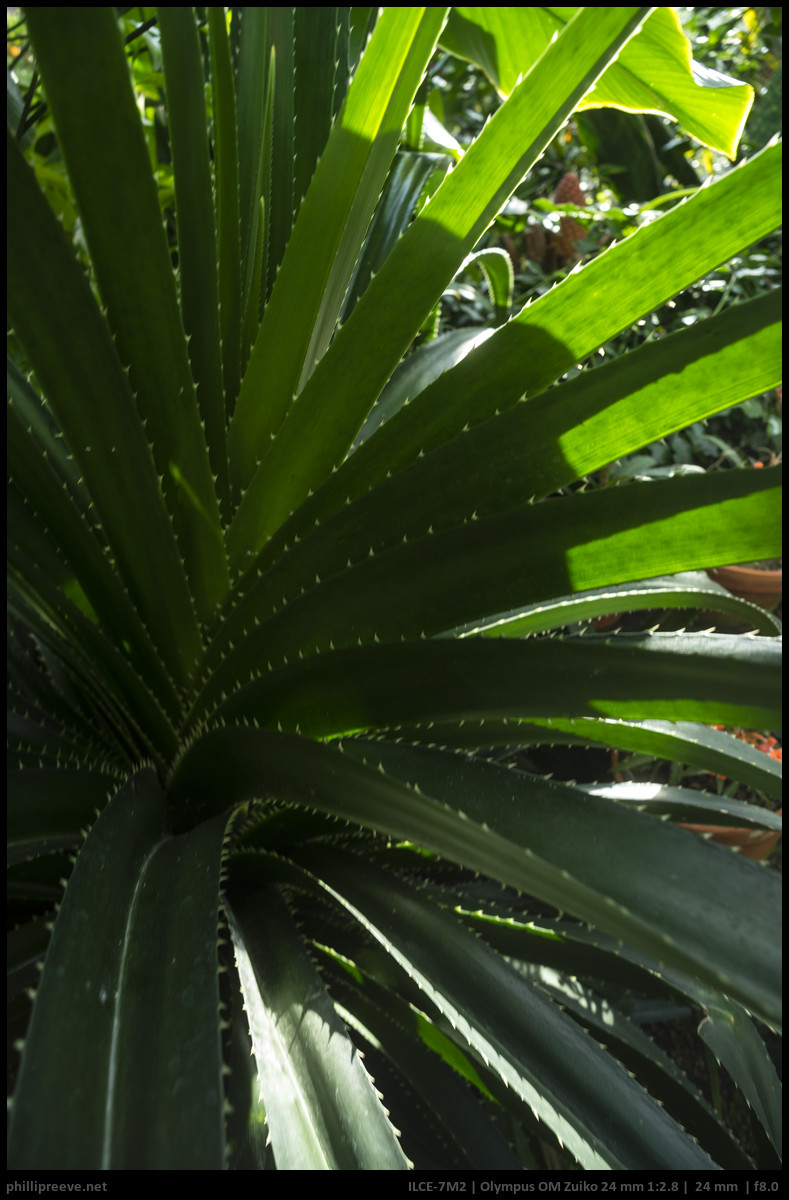 Classic wide angle lenses usually have rather busy bokeh and the Olympus OM 2.8/24 is no exception here.

At f/2.8 out of focus highlights are rendered busy with a defined edge and towards the corners cat-eyes appear. Stopped down to f/5.6 bokeh is smoother but the hexagonal shape of the aperture becomes visible. 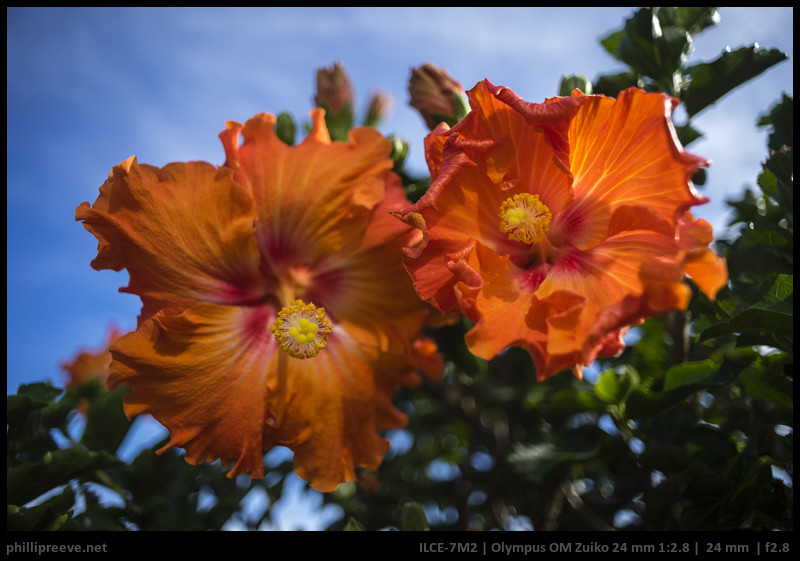 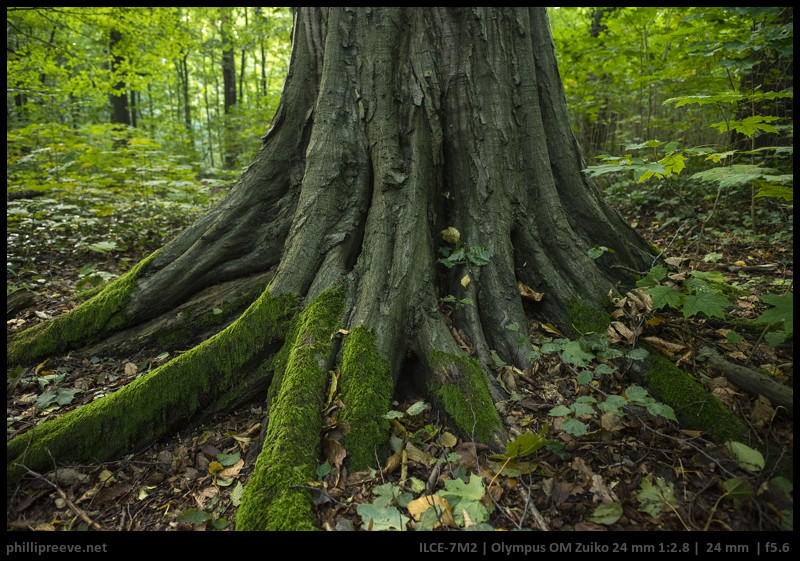 Axial CA are corrected very well, even in my worst case test there are hardly any CA to be noticed: 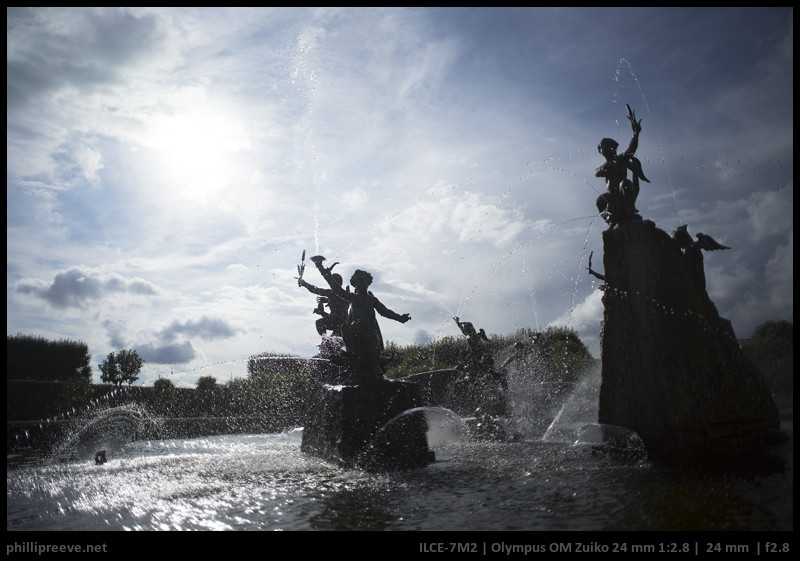 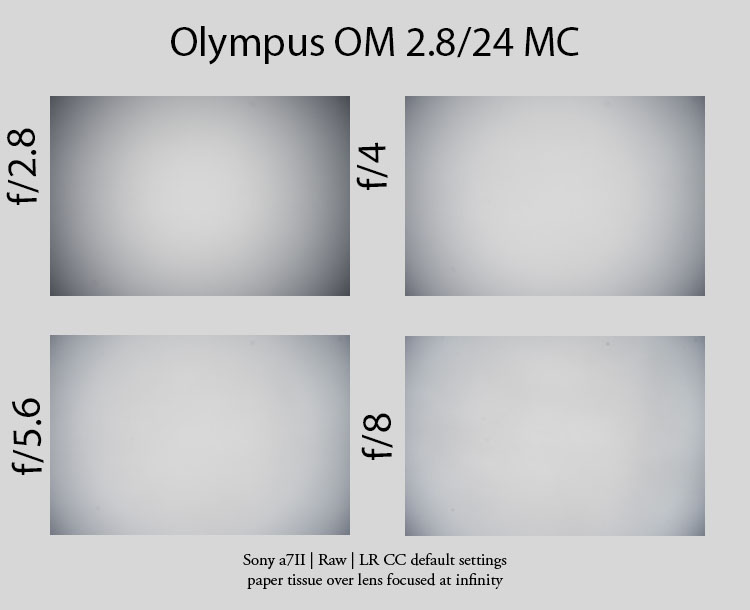 Since vignetting is not gradual but happen rather sudden in the corners I often had images of blue sky with visibly darkened corners. 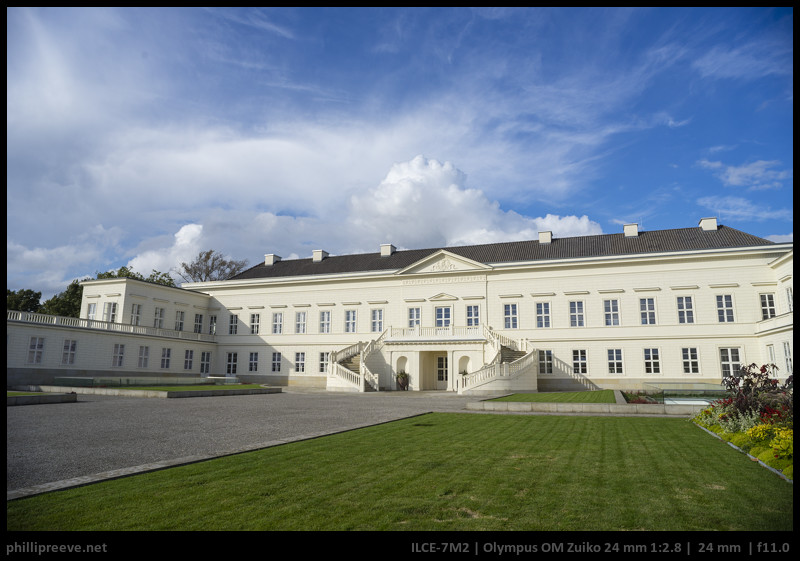 The Olympus OM 24mm f/2.8 shows a low amount of distortion for a wide angle but since it is complex mustache distortion I can’t fully correct  it in LR. Still probably low enough that hardly anyone would notice for architecture though. 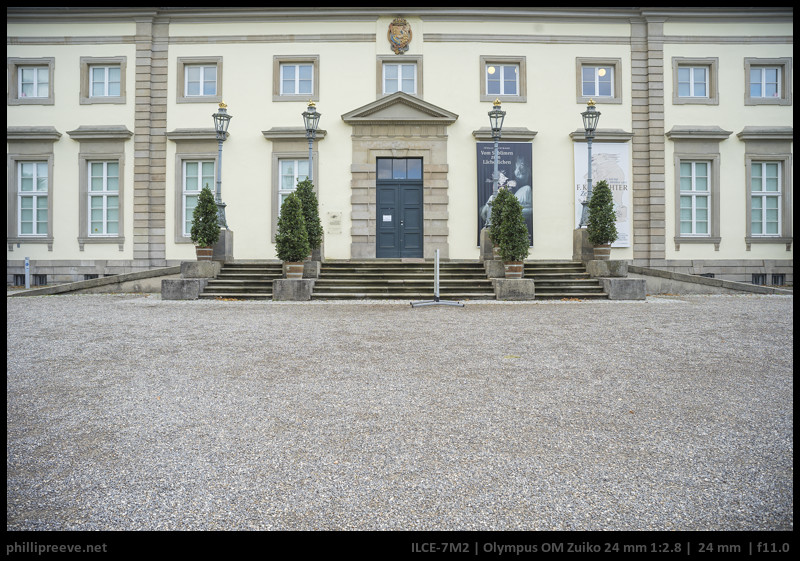 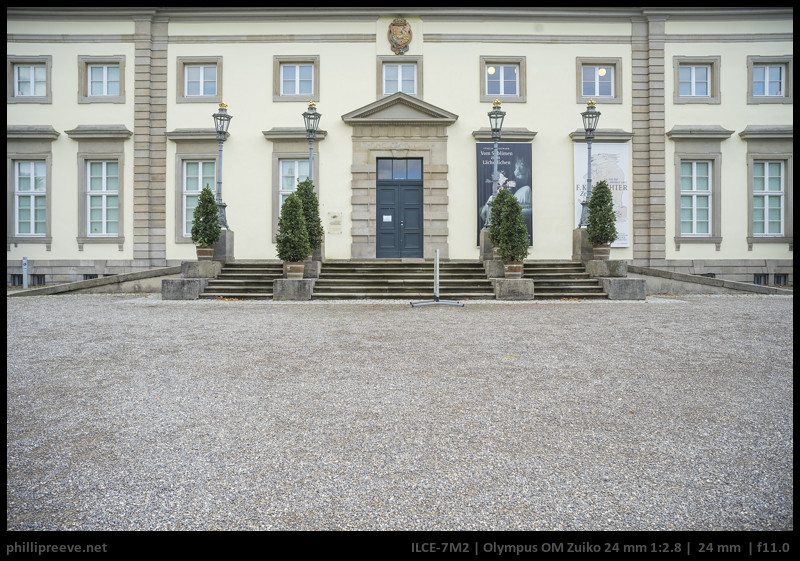 before: no correction | after: corrected with a +5 setting

f/2.8: Very good in the center, good to ok in the midframe area and okayish with lots of spherical aberration in the corners.

f/4: Excellent in the center, good to very good in the midframe area and not much better in the corners.

f/5.6: Very good across most of the frame but the corners still have low contrast and only okay sharpness.

f/8: Now even the corners are good.

f/11: A tad softer in the center but the corners gain some sharpness.

As long as your subject is in the center images are very sharp from wide open. For off-center compositions I would recommend f/5.6 for very good results and for across the frame sharpness you need to stop down to f/8 where it performs on a high level.

At the close focusing distance I only checked sharpness in the center but here it shows very good performance from wide open with only a marginal gain in sharpness if you stop down.

Canon nFD 2.8/24: The cheaper Canon is a bit larger and build quality is inferior. I would say optical performance is similar. Sharpness is quite comparable, the Olympus has a bit less distortion but a lot more vignetting. Choose the Olympus when size is your priority, otherwise the Canon is probably the smarter choice.

Minolta (plain) MD 2.8/24: My favorite legacy 24mm lens right now. Build quality is not great but better than that of the Canon. I think it performs a bit better against sun than the Olympus and it has no vignetting issues. Sharpness is similar.

Sony FE 4/16-35 ZA OSS: About 2.5 times the weight, many times the size, about 10 times as expensive this modern zoom is not nearly as pleasant to handle but significantly sharper at wider apertures. At typical landscape apertures the ZA is still a bit sharper but not by much. More noticeable is the higher contrast but that can be added in post to some degree.

Optically the Olympus OM Zuiko 2.8/24 MC comes with a number of compromises: For good across the frame sharpness you need to stop it down to f/8 or even better f/11. Flare resistance isn’t very good either and vignetting is unusually high. This limits its usefulness but if you take the shortcomings into consideration the Olympus can give you very good results for little money.

I have very little but praise for the mechanics and the handling of the OM 2.8/24. It is built to high standards and both focus- and aperture ring are pleasant to use. Since it is so small it is a good choice for any small kit on a budget.

All in all I am a bit reserved about recommending the Olympus OM 2.8/24: It has shortcomings which limit the applications you can use it for. But since it is rather cheap and very small it can still make good sense in your kit because for some applications it performs very well.

The Olympus OM 2.8/24 usually sells for around $100 used at ebay.com or around 130€ at ebay.de (affiliate links).
If this review was helpful to you, please consider using one of my affiliate links. Thanks ?

You can find these and more images in full resolution in this flickr set: Olympus OM 1:2.8 24mm. 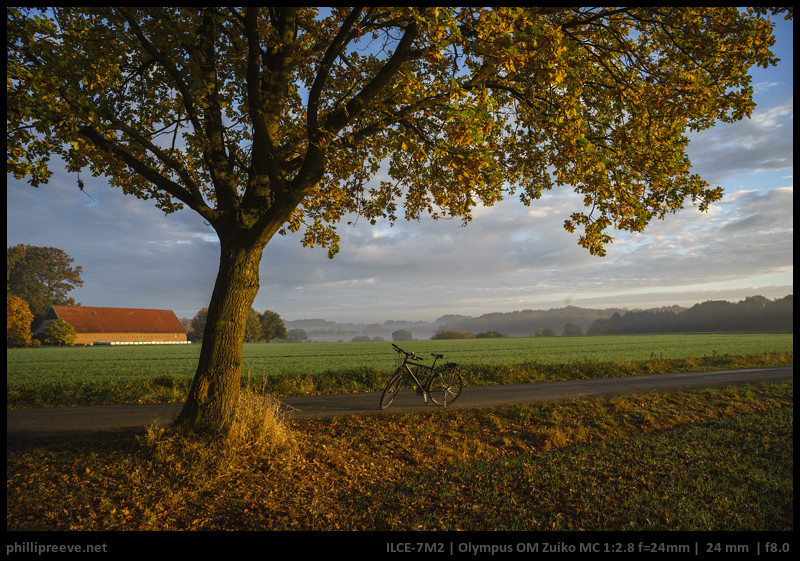 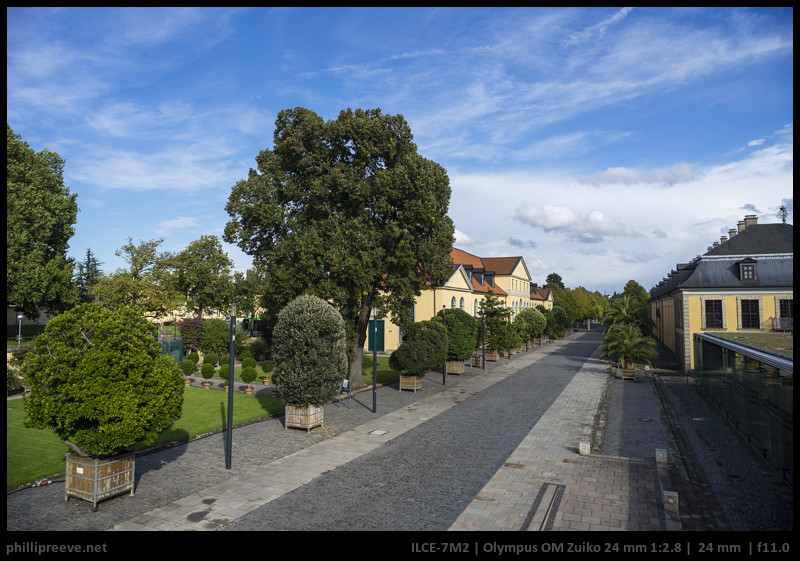 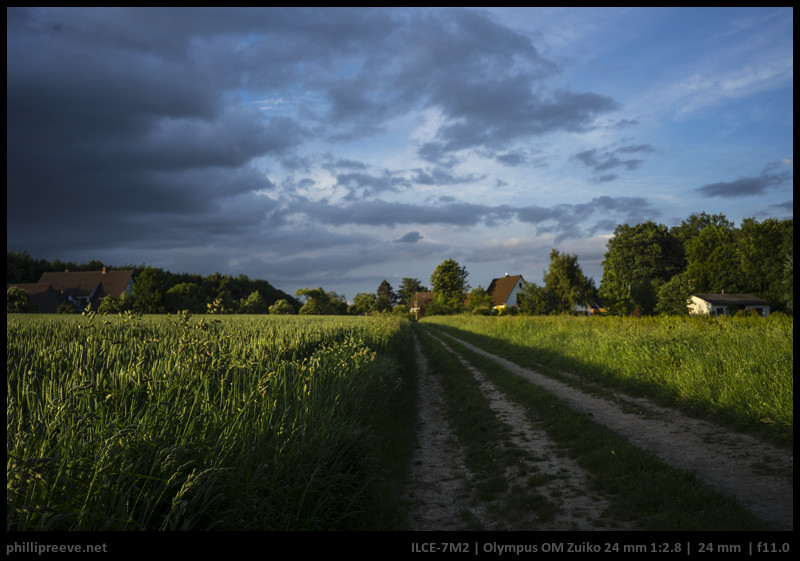 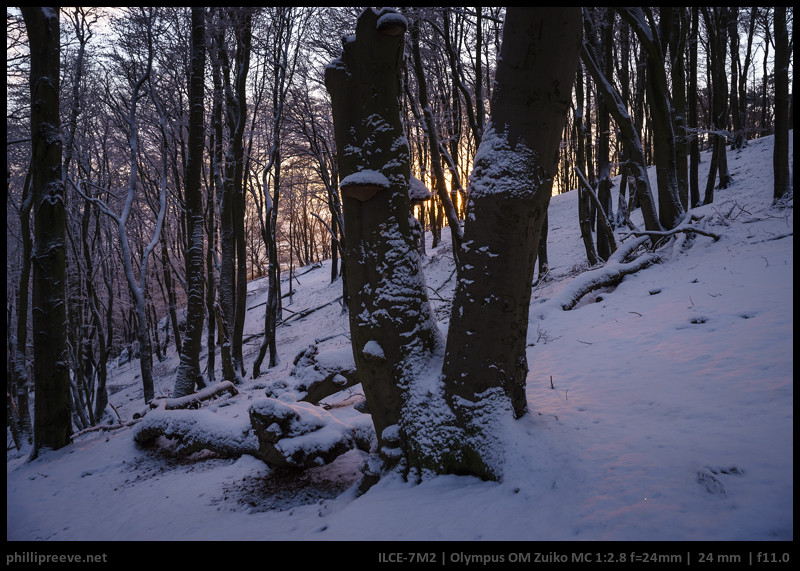 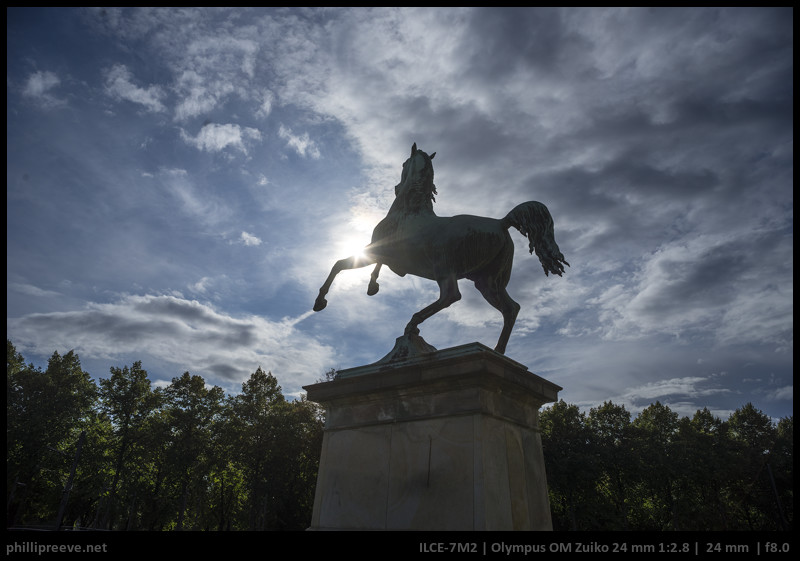 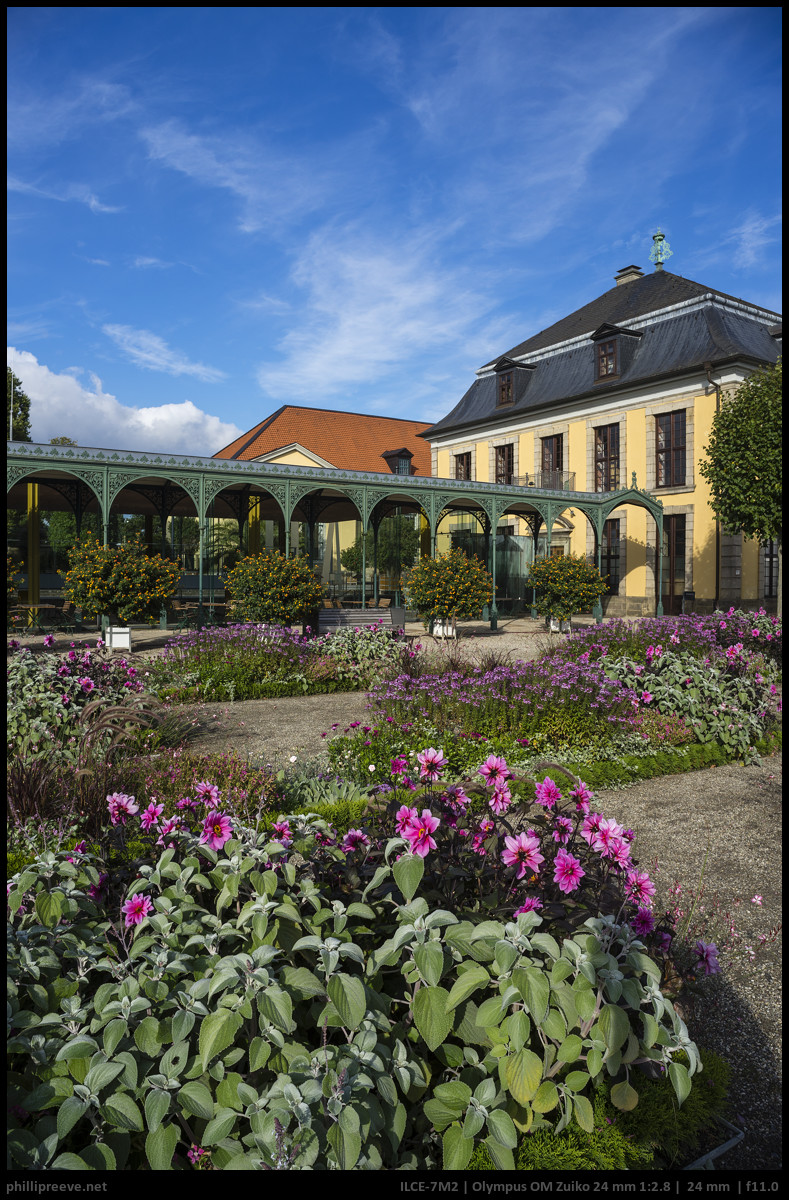