I always think we need more Pancake lenses, but except for the Samyang 24mm 2.8 and the recently reviewed TTArtisan 50mm 2.0 we didn’t get that many options in the Sony FE world yet. The latest addition is this Brightin Star 23mm 5.6. The first odd thing to notice: it is a fixed aperture lens, so it is always f/5.6 and cannot be stopped down further.
Can it still be a viable addition to your kit? Let’s find out…

You can find most of the sample images in full resolution here.

The Brightin Star is a one of a kind lens. Its full specifications are:

You can buy this lens from Amazon.com | ebay.com (affiliate links) and the price is $98

This will probably be the shortest handling chapter yet. The Brightin Star 23mm 5.6 is a unit focus lens and when focusing you just rotate the whole front part of the lens. This means using polarizers is a little less fun as the front element with polarzier will rotate when focusing.

The focus ring has markings for 0.24, 0.5, 1, 2 meter and infinity. The markings all seem to be simply printed, not engraved and filled with paint. The resistance of the focus ring is also a bit on the stiff side, as was already the case for the Brightin Star 50mm 0.95.

When looking at the lens from the rear you see the exposed helicoid with grease. Dust and other debris is easily collected here. You can also see there are no electronic contacts to communicate with the camera. There was also no lens hood included in the package and I am not aware of an official one.

It is recommended to have a look at this article first to get an idea how this brightness graph works.

Some wide angle lenses, especially very small ones, show a bit of a color cast towards the corners, the Brightin Star 23mm 5.6 is one of these lenses. With evenly lit or mostly white subjects you can easily spot a green color cast in the corners.

You can check out my article How to: Correcting Color Cast in Lightroom where I explain different methods to fix this. 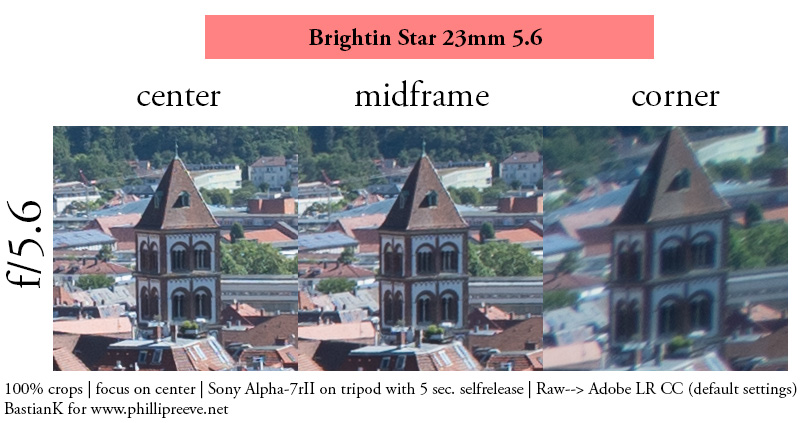 For a slow fixed aperture wide angle lens the one thing that would be important to me is across frame sharpness at infinity. Unfortunately the performance is not that great here. You can also have a look at the full size samples to get a better idea.

Surprisingly at close distances the performance is really good, not only in the center of the frame, but it looks to be really flat field with great performance right into the corners. Interesting design decision.

After good infinity sharpness the second most important thing in a fast fixed aperture wide angle lens would be good flare resistance.

As can be seen from the picture above a light source outside the frame may create severe issues with veiling flare running across most of the frame. Maybe a hood could help here.

With most lenses there is also a very specific position close to the corner of the frame that will lead to a huge flare and the Brightin Star 23mm 5.6 is no exception. Unfortunately there are several positions where something like this can happen here. 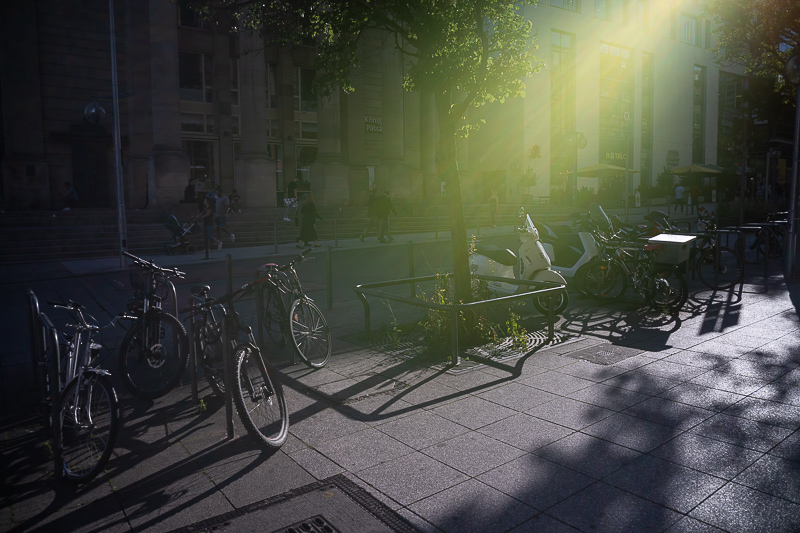 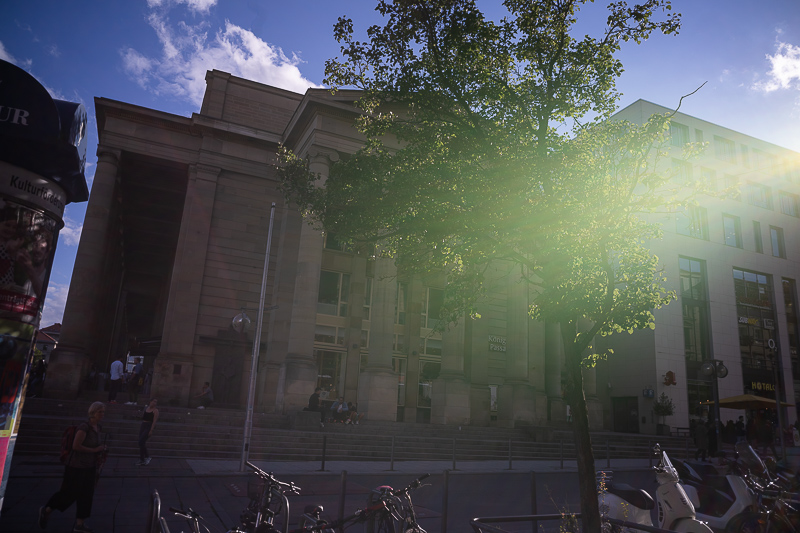 With a strong light source inside the frame we unfortunately also see internal reflections.

Coma is a common problem in fast wide angle lenses, but already the small 28mm f/5.6 lenses had issues here and same is true for the Brightin Star 23mm 5.6 as well. Unfortunately we cannot improve the situation by stopping down here.

The Brightin Star 23mm 5.6 shows a noticeable amount of barrel distortion which is also a bit wavy. There is no profile in Lightroom available, but dialing in +5 is doing a reasonably good job of correcting this.

This is a fixed aperture lens with round opening, so no sunstars.

The amount of lateral CA is low, but the border/corner sharpness is also lacking, so even after correction these areas don’t exactly look good anyway.

Due to the maximum aperture being f/5.6 you will only very rarely find longitudinal CA in your pictures. Purple fringing is also not really an issue.

Samyang 24mm 2.8 AF:
Phillip reviewed this one and said it is a lens with many compromises, but next to this Brightin Star lens it doesn’t exactly look like that. Without its lens hood the Samyang is only slightly bigger but half the weight and features not only an aperture diaphragm but also a more sophisticated optical design and even AF.
I strongly recommend to pay the premium and get this Samyang lens if you are looking for a compact option in this focal length range and you are on a budget.
buy from Amazon.com | Amazon.de | ebay.com | ebay.de | B&H for $199 (affiliate links)

MS-Optics 24mm 2.0 Aporia:
The MS-Optics 24mm 2.0 is much smaller and light, yet it is a whopping 3 stops faster and even features an aperture diaphragm. It is also an exotic/expensive lens with a few notable quirks and certainly not for everyone.
buy from ebay.com for ~$1200 (affiliate links)

Voigtländer VM 21mm 3.5 Color-Skopar:
The Voigtländer VM 21mm 3.5 Color-Skopar is a small, well balanced modern wide angle lens. Even though it is small in absolute terms it starts to look a bit big compared to the Brightin Star 23mm 5.6 lens reviewed here, but it is noticeably faster, shows better flare resistance and does of course come with an aperture diaphragm.
buy from CameraQuest | B&H | Robert White | amazon.com | ebay.com for $799 (affiliate links)

7Artisans 35mm 5.6 Wen:
The focal length is different but it shares the minimum focus distance of 0.3 m and the fixed aperture. I haven’t reviewed this one.
buy from amazon.com | ebay.com | ebay.de | B&H new for $138 (affiliate links)

Let me first say, I think there is a market for a tiny and affordable yet slow wide angle lens in the E-mount world – even if it was fixed aperture. I often travel with a fast 35mm as my main lens and a small lens like that, less than 200g, would surely come in handy for the shots where I would like to go wider.

Is the Brightin Star 23mm 5.6 that lens? Unfortunately not. The rather basic mechanical construction, the fixed f/5.6 aperture and the high vignetting I might have been able to accept when dealing with a super small wide angle lens for ~$100.

But what will a slow wide angle lens be used for most of the time? Landscape or architecture pictures. And for that I want decent across frame performance at infinity which the Brightin Star lens doesn’t deliver. Have a look at the sharpness section or my full resolution sample pictures to see for yourself.

What is also interesting: in my testing I found this lens to be free of field curvature and showing great across frame performance at the minimum focus distance. It simply does not make sense to me.

You can buy this lens from Amazon.com | ebay.com (affiliate links) and the price is $98

You can find most of the sample images in full resolution here.